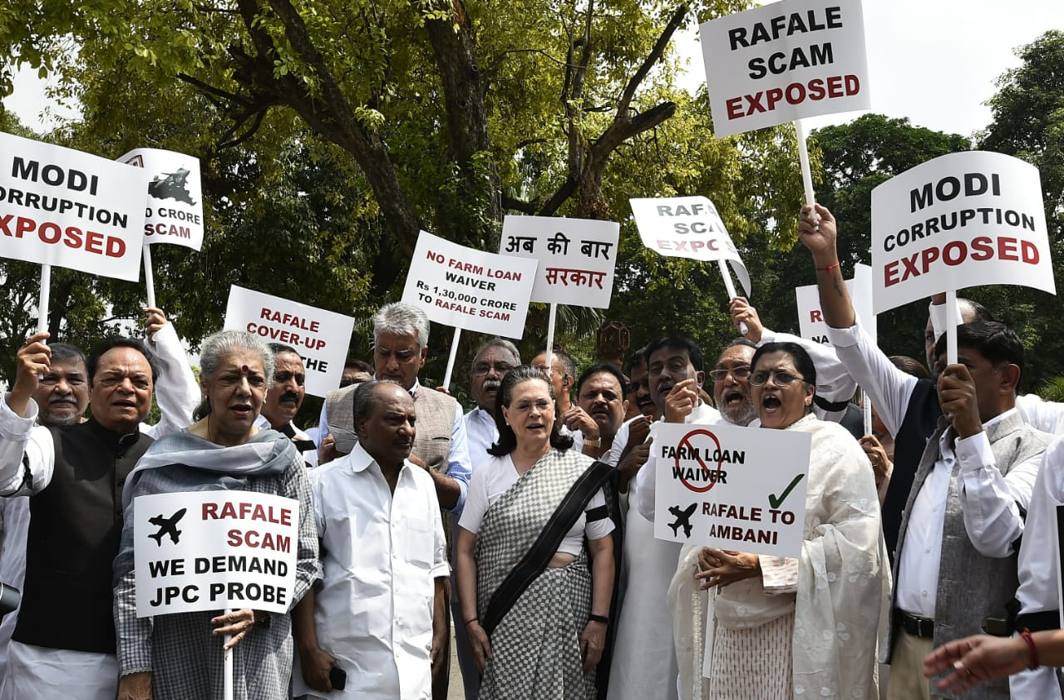 Opposition parties on the last day of Parliament’s monsoon session raised the issue of alleged scam in Rafale deal and demanded answers from the Narendra Modi government, asking for a probe by a Joint Parliamentary Committee (JPC) into the matter.

The Opposition MPs raised slogans in Lok Sabha seeking to establish a JPC to investigate the alleged irregularities in the Rafale deal.

In Rajya Sabha, Congress members sought a discussion on the issue suspending the legislative business.

“This is the biggest scam of the world. We are demanding the formation of a Joint Parliamentary Committee (JPC) to investigate the Rafale deal,” Congress leader Ghulam Nabi Azad said in the Rajya Sabha.

Minister of State for Parliamentary Affairs Vijay Goel dismissed their protest and asked the Opposition to bring substantial proof before they accuse the Prime Minister of corruption. This led to protest in the House.

Congress members on Thursday had created uproarious scenes in the Lok Sabha demanding a probe into the Rafale deal by a JPC, forcing an adjournment of the proceedings. They were heard demanding a JPC probe into the deal and a reply from Prime Minister Narendra Modi.

Congress leaders had turned down a breakfast invite from Rajya Sabha chairman M Venkaiah Naidu for today after the lawmakers weren’t allowed to raise their concerns around the Rafale fighter jet deal.

Naidu had declined permission to leaders from the Congress and other parties to raise their demand for a parliamentary probe into the Rafale deal, and even switched off their microphones and hurriedly push through two bills despite their protests.

The fresh protests in Parliament followed a press conference by two former ministers in the previous NDA government headed by Atal Behari Vajpayee, Arun Shourie and Yashwant Sinha, on Wednesday.

In a detailed press release with annexures, Shourie and Sinha rebutted the government’s argument that each Rafale cost only €91.7 million (Rs7.3 billion), because the price of the fighter should exclude an additional €47.2 million (Rs3.75 billion) spent on “India specific enhancements”.

The former ministers rebutted the “enhancements” argument by citing the India-France Joint Statement issued after Modi met French President Francois Hollande in Paris in April 2015. In that formal document, the two leaders agreed that “the aircraft and associated systems and weapons would be delivered on the same configuration as had been tested and approved (in the MMRCA testing) by Indian Air Force (IAF), and with a longer maintenance responsibility by France.”

In the press release, they pointed out: “That clear and emphatic affirmation in the (Modi-Hollande) Joint Statement nails the falsehood that has been spread since then — namely, that the price per aircraft is so much higher because of some novel ‘India specific enhancements’ in the 36 Rafales now contracted.”

The veterans summed up the charges to say that in the present deal, national security has been jeopardised, an enormous additional burden has been placed on the national exchequer, the one organisation in the country which has had decades-long experience in manufacturing aircraft – HAL – has been kicked out of the project and, finally, that a private party which has had absolutely no experience in manufacturing aerospace and defence equipment has been handed an enormous financial benefit.

Calling the entire transaction “a textbook case of criminal misconduct, of misuse of public office and of enriching parties at the expense of the national interest and national security”, they said: “Parliament and other agencies charged with the responsibility of overseeing the defence of our country, of preventing corruption and of ensuring that the government remains accountable as well as media must exhume every fact about how the original project was jettisoned, and one without rationale has been put in its place.”