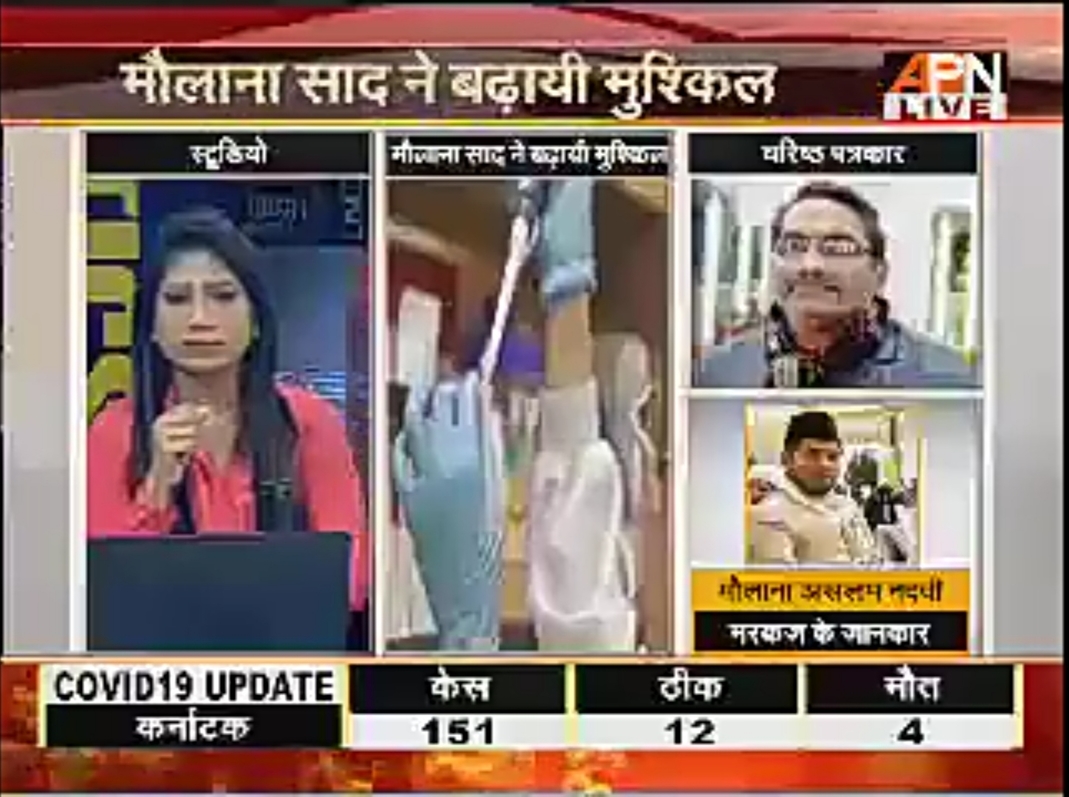 Panelists stress on the importance of complying with lockdown, social distancing.
Over 1,000 cases across 17 states have been found linked to the Tablighi Jamaat gathering. APN’s popular debate Mudda discussed the issue of investigations related to the Jamaat event. Anchorperson Neha Dubey posed the questions to the panelists, including medical expert Dr Ankit Sinha, Markaz expert Maulana Aslam Nadwi and noted scribe Shiv Sharan.
Sharan said: “The numbers had to go up. But the Jamaat incident has spiralled the numbers further. In UP, there’s a warning that all persons linked to the Jamaat event must own up. Now everybody is abiding by the lockdown, and even Muslims are concerned and alarmed about the Jamaat incident.
Nadwi said: “See, illnesses see no community. All Indians are fully supportive of PM Modi’s efforts. Markaz associates are fully cooperating. It’s not good to single out the Markaz event as a ‘super spreader’. The symptoms take time to show. So, you must realise, the spread is not deliberate. In India, corona spread is being given a Hindu-Muslim colour. If all 1,500 people who attended the event had the virus, the spread would have been far greater. Admin officials have been coming to the Jammat people to talk. I don’t agree that the Markaz people are not cooperating. They are fully cooperating. Action must be taken against those who are not cooperating. Please, take note, this is not a conspiracy. Tablighi Jamaat chief Maulana Saad is himself on quarantine. This is not a communal thing. We have always maintained amity with all the communities.”
Sharan said: “If they avoid coming out with the facts, suspicions are going to be raised. Doctors are for all; police is also for all.”
Nadwi said: “Tablighi Jamaat Markat Nizamuddin is like a madrasa. It is not true that the Jammat is hiding facts. This action is not to with the NRC. We realise that these are health teams that are coming, and not NRC teams. Whoever is spreading such rumours is wrong. It is being said that Tablighi Jamaat people were spitting; no one spat on the police. Yesterday, as per Modi ji’s request, we also lit lamps at 9 pm. Tablighi Jamaat is fully cooperating with the government.”
Sharan said: “Maulana Saad should have cancelled the gathering. By refusing to do so, it showed that they are unmindful of government directive or societal concerns. This is not like Shaheen Bagh where one can go on protesting. This is a matter of life and death. They have just been too stubborn, and this goes against the nationalist sentiment. Hindu and Muslims have been living in amity; but this case shows the price the nation will now pay for the callous attitude of the Jamaat.”
Nadwi said: “When the gathering was organized there was no formal directive from the government to cancel the event. Talk was only about social distancing. Everything was going on as normal.”
Dr Sinha said: “A lot of cases are coming. Tablighi Jamaat event has been highly unfortunate. Now local transmission has also started; it’s in the starting phase. If we follow lockdown and social distancing, the spiralling of the cases will be arrested to an extent. Italy went to Stage 3 within a week. That’s why measures like lockdown and social distancing are very important. It’s important to boost immunity. Maintaining a regular routine like sleeping on time, getting exercise, having healthy, well-cooked food, all go to boost immunity. Antibody tests can be considered to see which cases are particularly sensitive. Moreover, given our population, we can’t be like South Korea or Japan and go in for rampant Covid-19 testing. Only symptomatic cases are considered for such tests. Testing has gone up, but we have to be careful about that.
Sharan said: “See, our plans ahead have to be considered in the context of our population. So, the bottomline is that we all have to follow the lockdown or brace up for harder measures. Ramzan time is also coming. The opposition leaders have been commenting; but this is no time for debate.”
Dr Sinha said: “The coming summer months are crucial. Usually in the summer months, there are lesser cases of flu. It’s not that the virus will vanish, but the number of such cases will go down. We will have to maintain discipline, like social distancing, handwashing, and so on.”