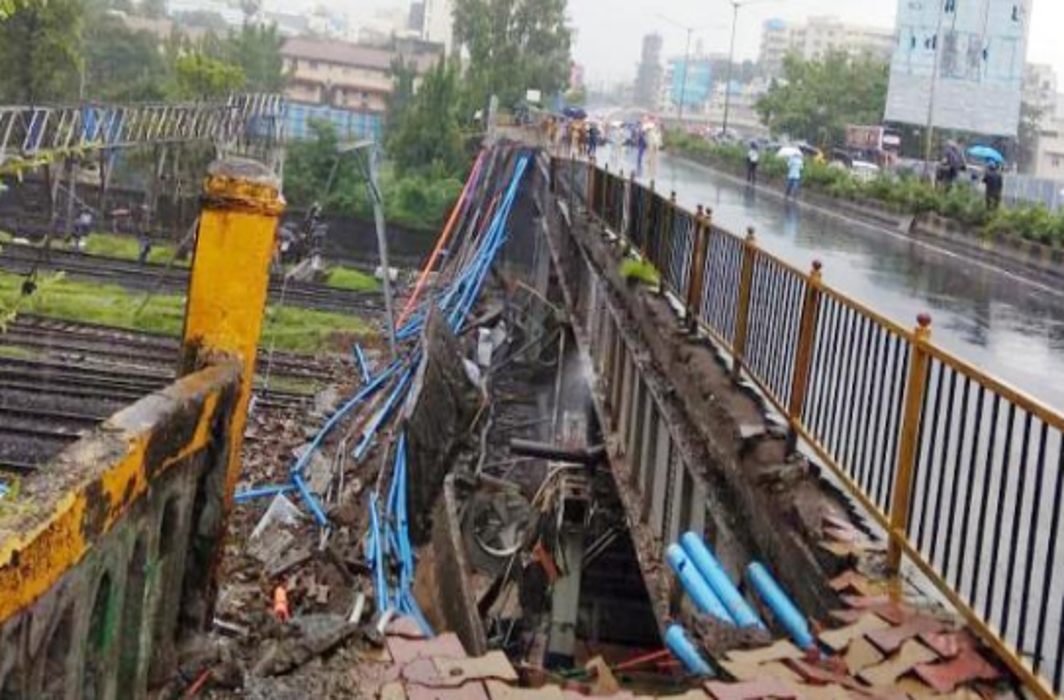 Amid heavy rains in the city, part of a foot overbridge (Gokhale Bridge) collapsed in Mumbai’s Andheri collapsed around today 7.30 am, bringing the western local railway services on halt, an official said.

It is suspected that some people are trapped under the debris of the collapsed over-bridge, a senior fire brigade official said, adding that a search and rescue operation is underway, PTI reported.

According to reports, two persons injured in the Andheri bridge collapse are critical, while six others have sustained grievous injuries.

A special medical team of Railway doctors is taking due care of all of them at Cooper Hospital. The Commissioner of Rail Safety of Western Circle will hold an inquiry of this incident.

The Gokhale bridge connects Andheri East and Andheri West stations and is used by thousands of commuters each day.

A part of the bridge, which is on the southern end of Andheri station between platform numbers 7-8, crashed around 7.30 am, ripping off overhead wires which were left on the tracks.

The bridge crash damaged a portion of the platform roof, blocked railway lines and damaged high-tension electric wires and overhead power equipment, according to an IANS report. A team of engineers are working to restore services, a Western Railways official told news agency Press Trust of India.

Officials said the debris has to be removed and the wires fixed before trains could resume. Meanwhile, Western Railways has tweeted saying cranes have been deployed to lift the slabs of the bridge from the railway tracks.

“A part of the foot overbridge has collapsed which has halted our up and down services of Western Railway. Our officers have reached to the spot and accessing the situation,” said Western Railway spokesperson Ravinder Bhakar.

“Thankfully, no train was passing beneath the track,” he added.

Traffic at the bridge has been stopped and trains – the lifeline of India’s financial capital – have been affected.

The routes of some local trains on other lines have been extended to clear the spillover at Ghatkopar station, officials said.

According to reports, the traffic on all four railway lines — the up and down fast lines and the up and down slow lines — between the Bandra and Goregaon suburban stations as well as on the bridge affected came to a halt after the collapse.

Union railways minister Piyush Goyal took note of the incident and said that he has asked officials to work to “rapidly restore traffic.” “I have also ordered an inquiry by Commissioner of Rail Safety,” Goyal said.

A tweet from the Maharashtra chief minister’s office said chief minister Devendra Fadnavis has asked Mumbai’s municipal body chief to increase frequency of the city’s BEST buses. Around 39 extra BEST buses have been arranged on the western line route from Bandra to Andheri.

While some trains have been canceled or terminated due to traffic disruption, 27 special buses have been arranged made between Borivali and Bandra stations for clearance of stranded passengers.

Last year in September, Mumbai was struck by a horrible tragedy that saw 23 people died following a stampede at the Elphinstone Road station on the Western Railway.

The stampede took place on a foot overbridge injured nearly 40 other people.