The Nashik farmers' rally comes days before a tractor rally set to proceed on January 26 where lakhs of tractors from Punjab, Haryana, and Rajasthan have reached on Tikri border. 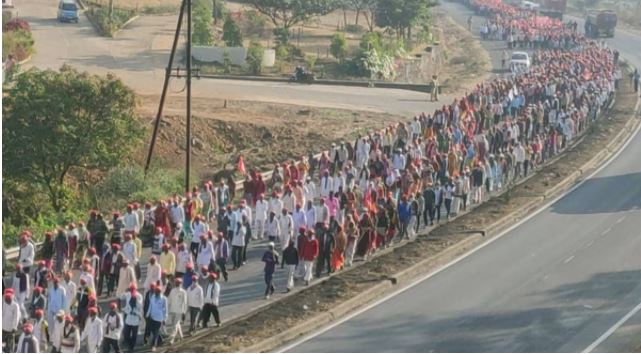 Thousands of Farmers from 21 districts of Maharashtra affiliated to All India Kisan Sabha and various other farmer organisations, who are protesting against the Centre’s farm laws, have started their march towards Mumbai on Sunday. The farmers have planned to cover 180 km to reach at city’s Azad Maidan where they will hold a massive rally on Monday and then march towards the national capital to support farmers’ protest on Republic Day.

Visuals from the march to Mumbai shows a heavy crowd of farmers waving flags and carrying banners, proceeding along the roads of the Kasara Ghat region. The farmers, drawn from several smaller unions have joined under the banner of the All India Kisan Sabha.

The Nashik farmers’ rally comes days before a tractor rally set to proceed on January 26. Over a thousand tractors are expected to take part in the rally that will be held along Ring Road. Farmers across the country are marching towards Delhi in order to take part in the ‘Kisan Gantantra Parade’ on the occasion of Republic Day. Tractors from Punjab, Haryana, and Rajasthan have reached on Tikri border.

Earlier, the Supreme Court had declined to entertain an application by the Centre through Delhi Police to stop protesting farmer unions from carrying out tractor rally into the Capital on Republic Day. The apex court turned down the Centre’s request to halt the rally. It upheld the farmers’ rights to peacefully protest and left it up to the police to decide on the tractor march.

Farmers have also turned down the Centre’s recommendation to halt the farm laws for 1.5 years. Farmers have been protesting on the different borders of Delhi since November 26 against the Centre’s three farm laws demanding the complete repeal of the laws.