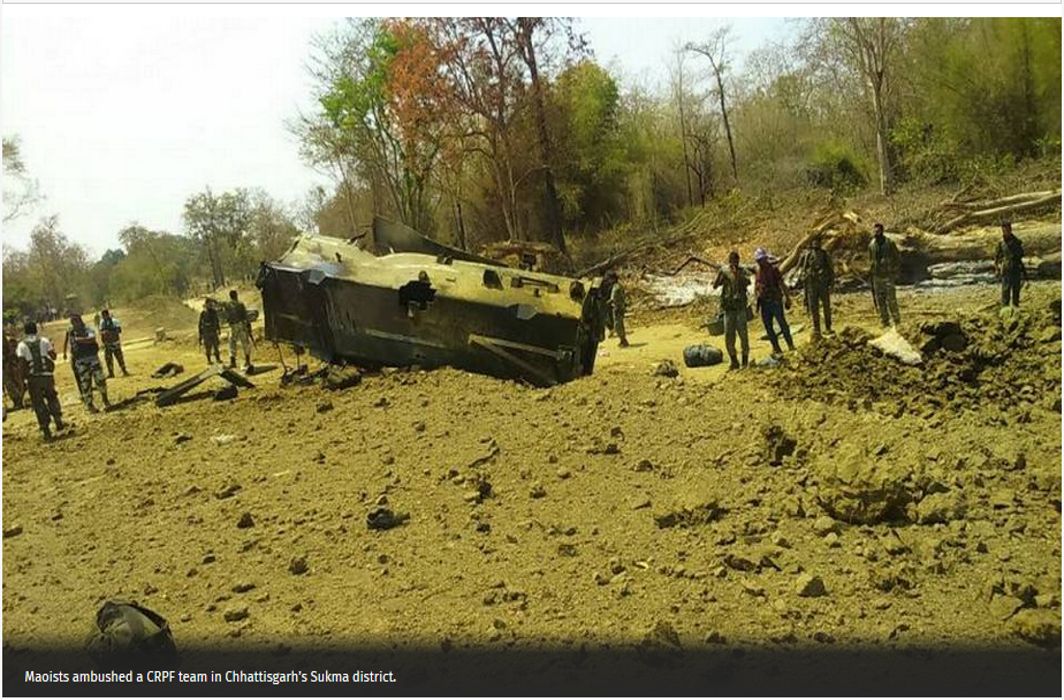 At least nine personnel of Central Reserve Police Force (CRPF) were killed and two others injured when suspected Maoists blew up their mine-protected vehicle (MPV) in Chhattisgarh’s Sukma district on Tuesday, March 13.

The blast occurred when a team of CRPF’s 212th battalion was patrolling in a forest in Kistaram area of Sukma, located around 500 kms from Raipur, a paramilitary official told news agency PTI.

The security men were conducting an area-domination operation in the forest of Kistaram when the Maoists blew up the CRPF’s MPV with a huge amount of explosives, he said.

“Maoists targeted an MPV [Mine Protected Vehicle] carrying 10 CRPF men in Sukma today. There is a possibility of many of them being killed in that blast,” DM Awasthi, Special Director General of Police, Anti-Naxal Operations unit of the Chhattisgarh police was reported to have said. “The firing has stopped now.”

Extra forces have been sent to the spot and the Sukma District Superintendent of Police has also reached the spot.

A statement issued by the CRPF said that an encounter took place between the CRPF’s 208 CoBRA (Commando Battalion for Resolute Action) battalion and Maoists at 8 am today.

“Seeing the response of the 208 CoBRA, the Maoists fled away. Again, at 12.30 p.m., the Maoists targeted another team of 212 battalion of the CRPF on Kistaram–Palodi road in Sukma District in which a mine protection vehicle was blown off by triggering an IED [Improvised Explosives Devise]. Injured personnel are being evacuated by helicopter to Raipur,” a CRPF official said.

Terming the attac as “deeply distressing, Union Home Minister Rajnath Singh said, “I bow to each and every security personnel who attained martyrdom while serving the nation,” he said.  “My heartfelt condolences to the families of those personnel who lost their lives in Sukma blast. I pray for the speedy recovery of the injured jawans. I spoke to DG @crpfindia regarding the Sukma incident and asked him to leave for Chhattisgarh.”

Today’s IED blast in Sukma, Chhattisgarh is deeply distressing. I bow to each and every security personnel who attained martyrdom while serving the nation.

The attack comes almost 11 months after 25 CRPF jawans were killed in an attack by nearly 300 Naxals at a construction site in Sukma. Also, 12 jawans of the CRPF were killed in the same district in March last year.

However, state Home Minister Ramsewak Paikra told the state Legislative Assembly in February that as many as 300 Naxals were reportedly killed in separate encounters with security forces in Chhattisgarh in the last two years, said a media report.