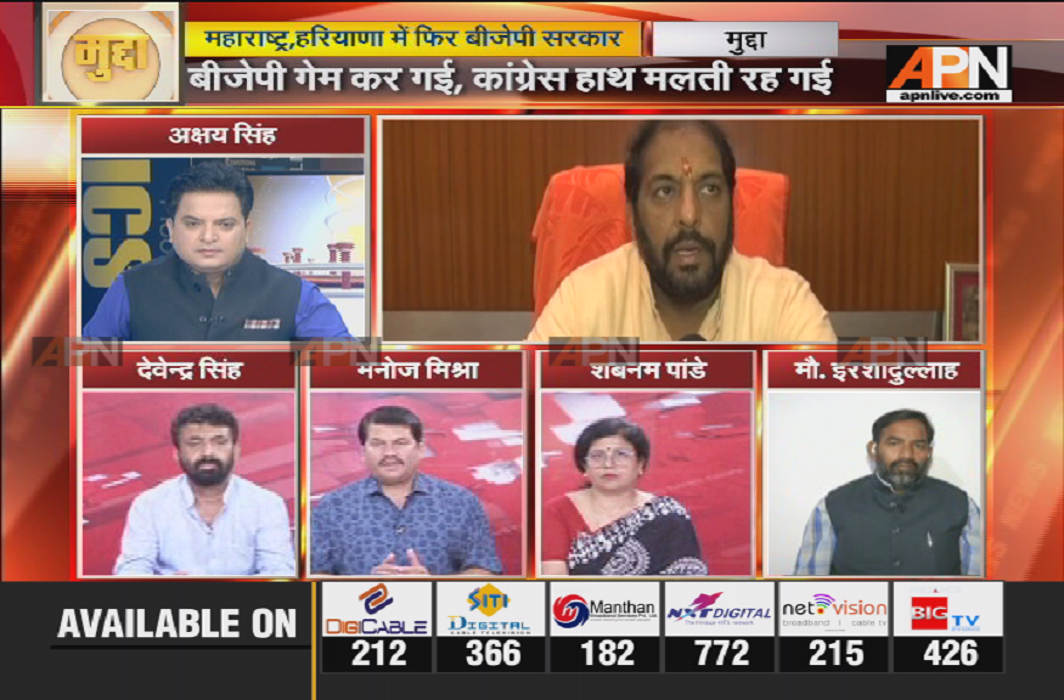 Maharashtra and Haryana are again likely to have the BJP at the helm. In APN’s popular debate Mudda, anchorperson Akshay posed the questions to panelists including the BJP’s Shabnam Pandey, Congress’s Irshad Ullah, PSPL’s Devendra Singh and noted scribe Manoj Mishra.

Ullah said: “They have money, they can do anything with that. On Dhanteras, people are buying gold and silver, Amit Shah is buying legislators. They are using all tricks that they can, they are not bothered about democracy. The Congress was about to make the government in Haryana, but BJP used its moneybags. They are stifling democracy.”

Pandey said: “The Congress is miffed. They were behind us, how can they make such baseless allegations? Let us focus on Haryana, and not talk about Karnataka and Goa. Their statements show their desperation. They are saying BJP got lesser seats. But we lost on lesser number on seats.”

Singh said: “What happened in Karnataka and Goa? Everybody knows how to get legislators on their side. It is common to join party and leave it at will.”

Mishra said: “Leaders are only interested in grabbing power.”

Ullah said: “Since the BJP came to power, responsibility and conscience have been compromised by legislators. I admit that we have slipped in playing the political game, but the other side uses money.”

Singh said: “Whichever party is at the centre, tends to have greater clout.”

Pandey said: “In politics, there is no permanent friend or foe. If Independents want to join our party, what is wrong with that? Grapes are sour for those who are out of power.”

Akshay asked about Gopal Kanda, and BJP’s sudden change of heart, to which, Pandey replied: “I have already said there are no permanent friends or foes in politics.”

Ullah said: “It is true that the BJP is only looking at government formation. Other muddas like development, economy, responsibility and accountability are not considered as important. We are facing cash crunch. After notebandi, who has money except the BJP?”

Mishra said: “People want basic necessities. Legislators should focus on ending corruption, putting development on the track. There is one positive thing about Modi, he is able to connect with the people, irrespective of the government’s policies.”

Singh said: “It is getting clear that the opposition is weak in UP and elsewhere too. Congress has done a lot of work, but it is also true that horse trading and other corrupt practices have always been going on. In these elections, the main muddas were related to development this time.”