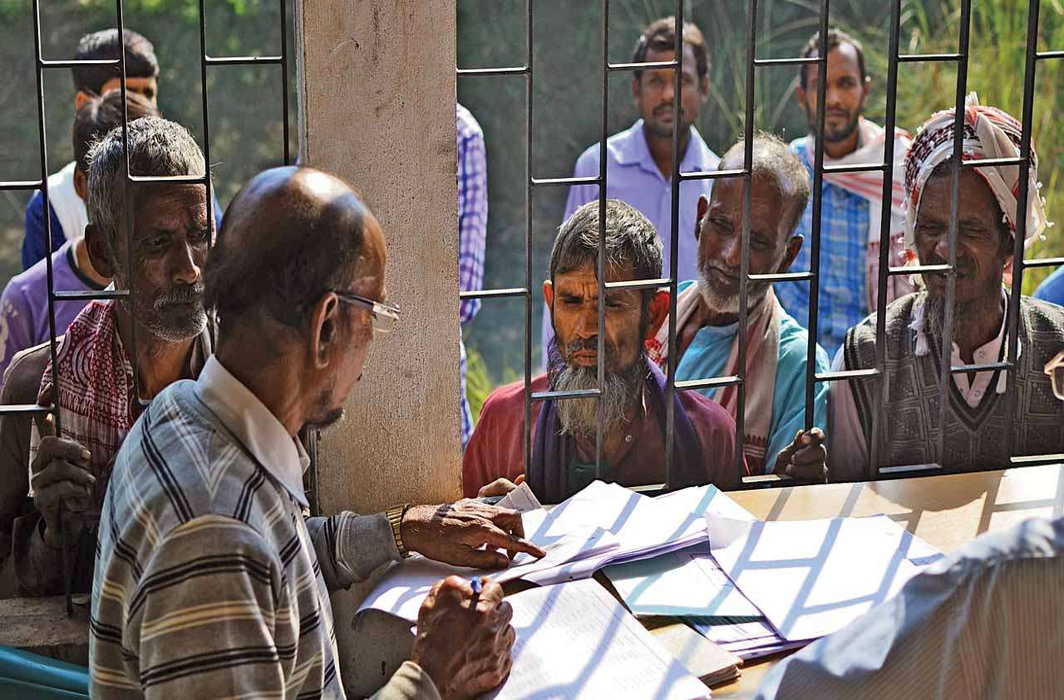 The draft of Assam’s National Register of Citizens, although still to be finalised, came under question with some significant and unlikely lapses and omissions coming to light.

Among the 40 lakh people who did not find their names in the complete draft National Register of Citizens published on Monday, News18 reported, was the family of India’s former President late Fakhruddin Ali Ahmed’s brother.

Ziauddin, the son of Fakhruddin’s brother Lt Ekramuddin Ali Ahmed family hailing from Rangia, in Kamrup district of Assam expressed shock that none of the family members’ names were on the list. He said that he would try to find documents to make it to the NRC list.

“I am the nephew of former President of India Fakhruddin Ali Ahmed, and my name is missing in the NRC, since my father’s name is not in the legacy data, we are little worried about it,” Ziauddin Ali Ahmed was quoted as saying.

Another name missing in the NRC list was Mohd Azmal Hoque, a retired soldier from Assam who had served in the military for 30 years and retired on September 30, 2016, reported DNA. Hoque was asked by Foreign Tribunal to prove his citizenship in September 2017 and when the final draft was published on Monday, July 30, his name was missing.

He had earlier told DNA: “After a six-month military training, I have served the Army in the technical department from various places. I was at the LoC in Punjab’s Khemkaran Sector and Kalaigaon, at Tawang on the Indo-China border, at Lucknow, at Kota. I also had a stint at the College of Defence Management at Secunderabad,” said Hoque.

He served in a non-combat role, in the computer and networking team and trained at Secunderabad 1ENE Training Centre.

On Monday, Shailesh, Registrar General and Census Commissioner, said each and every person whose name hasn’t featured will be given an individual letter to make and establish claims.

“The process has been completely transparent, fair, objective and meticulously carried out. Adequate opportunity to all applicants were given,” said Shailesh and emphasised that this is not the final list.

Assam is the first Indian state where the NRC is being updated after 1951, with March 24, 1971 as the cut-off date, to include names of “genuine Indian citizens”.

The NRC seeks to address the problem of illegal migrants which has been a serious issue in the State, leading to protests, movements and violence. However, the manner and criteria for judging who is Indian national and who isn’t is problematic. Persons and families who have not been resident in one place or state would be unable to establish their citizenship.

For instance, a person born in Jharkhand, educated in Kolkata or Delhi and then settled in Guwahati would likely be unable to prove his citizenship.

The issue rocked the Parliament for the second day on Tuesday, after forcing an early adjournment of the Rajya Sabha on Monday.

While Union Home Minister Rajnath Singh on Monday had said the sensitive issue should not be politicised, pointing out it was being carried out under the aegis of the Supreme Court, BJP president Amit Shah, speaking in Rajya Sabha on Tuesday, sought to score political points, saying it was BJP which had the courage to prepare the NRC.

Rajnath Singh had said: “The NRC exercise is being carried out under the aegis of the Supreme Court of India; it is a sensitive issue and I would request all of you not to politicise it. Everyone will have full opportunity to file claims/objections as per provision in the law. Only after the disposal of claims and objections, will the final NRC be published.”

On Tuesday, according to ANI, BJP President Amit Shah said in Rajya Sabha: “Rajiv Gandhi signed Assam accord in 1985, which was similar to NRC. They did not have courage to implement it, we did.”

Protests followed and after continuing ruckus on the issue, Rajya Sabha was adjourned for the day a little after 1 pm.

While the Opposition has been protesting the “injustice” to 40 lakh persons left out from the NRC and some, especially Trinamool chief and Bengal chief minister Mamata Banerjee, have demanded its withdrawal, the BJP hit back saying it would bring out a NRC for Bengal on the lines of the one for Assam if it is voted to power.

West Bengal BJP president Dilip Ghosh said on Monday that the National Register of Mr Citizens will be published in Bengal on the lines of the one in Assam if his party is voted to power in the state.

“If we (BJP) are voted to power in Bengal then we too will implement NRC in Bengal. We will send back illegal citizens to Bangladesh. Tough days are ahead, we will not tolerate any illegal immigrants in Bengal,” West Bengal BJP president Dilip Ghosh was quoted by NDTV as saying.