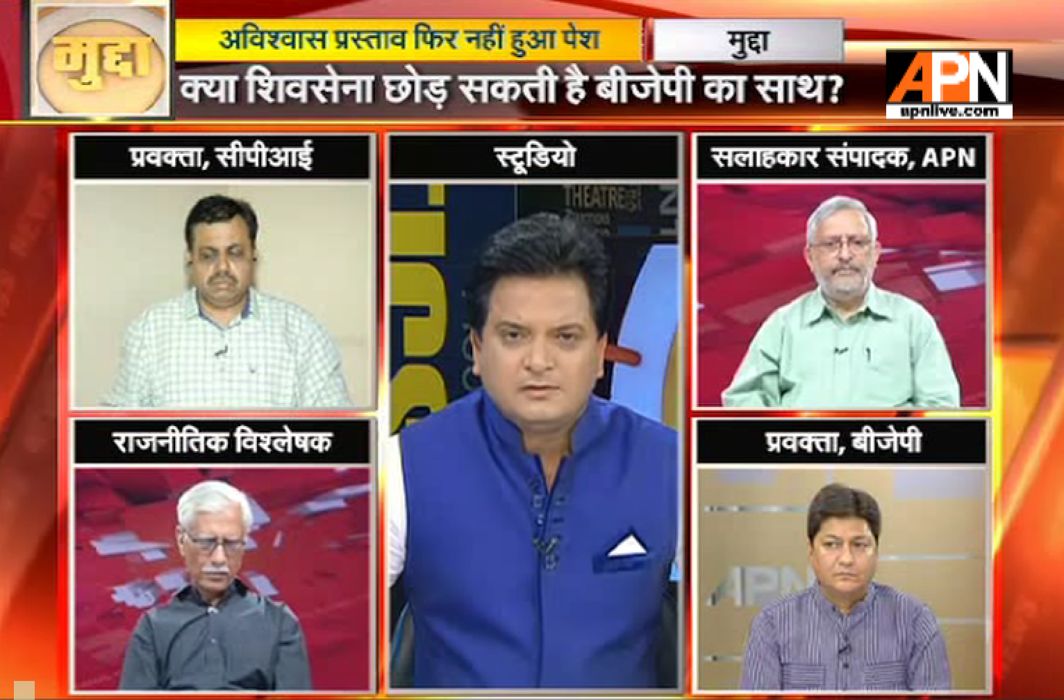 The no-confidence motion against the NDA government, pitched by Andhra Pradesh chief minister Chandrababu Naidu’s Telugu Desam Party and by YSR Congress, was not taken up on Monday as the Lok Sabha was adjourned till Tuesday after protests by lawmakers. However, the fallout of the TDP demand is that many opposition leaders have joined hands on the “oust-Modi government” issue. APN’s popular debate Mudda took up the issue. Anchor person Akshay posed the questions to panelists including BJP’s Ashok Goyal, CPI’s Vivek Shrivastava, political expert Atul Chandra, and APNconsultant Govind Pant Raju.

Goyal said that the government has a good majority and the opposition is only trying to secure brownie points.

Shrivastava said that though the Modi government has the numbers, it has no moral right to continue. “The opposition is united against Modi right now,” he said. Regarding the no-trust vote, he added that the opposition is doing what it’s been mandated to do.

Chandra said that in 2003 when Vajpayee was PM, a no-trust vote was tabled, but the motion was defeated by 312 votes. The fallout of the move was that Vajpayee had responded to Sonia Gandhi’s queries, and Lok Sabha polls were advanced by a few days. “It is certain the no-trust vote shall not be passed, but the fallout will be felt in Karnataka and Orissa,” he said.

Raju said that for the first time the Modi government has got this kind of jolt, but this no-trust vote regarding a regional demand looks like washing one’s hands when the water is flowing. “These demands are not concerned with the policies of the centre, which would have been tough for Modi to handle, but the opposition is sure to rattle Modi,” he said.

Chandra said coalition governments have their own set of problems. “Naidu has only 25 MPs, it’s a regional issue, but can the opposition promise, that if voted to power, they shall give a special package to Andhra as demanded?” he asked.

Shrivastava said this is not just about a local issue. The mudda might be that, but the issue has started a kind of opposition unity, in that way, this move is significant.

Goyal said the opposition knows that their mudda is weak, and the BJP has nothing to worry. “Modi government has been devoted to sabka sath sabka vikas, so the popular sentiment is still with Modi,” he said.

Shrivastava said it’s the right of the opposition to oppose, and we will give a tough fight to Modi in 2019.

Akshay pointed out that after 11 days of protest, what’s the gain? He wanted to know if these shenanigans are in view of the upcoming polls.

Raju said though it’s too early to say, it looks like AIADMK will not go with the government in 2019.