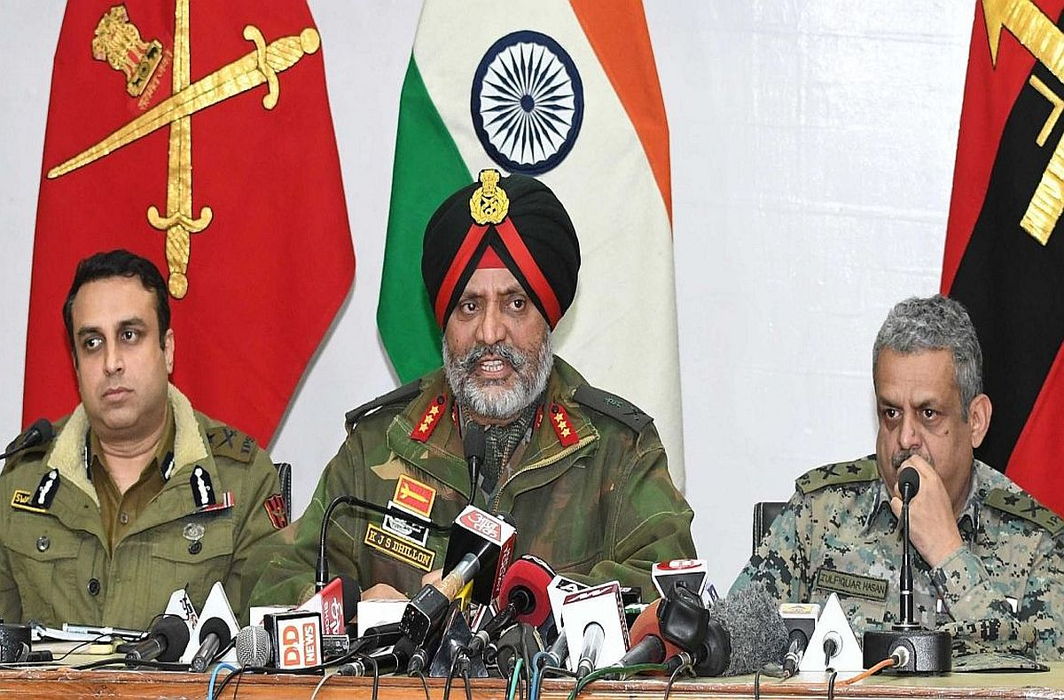 Pakistan army-backed terrorists are plotting to carry out an attack on the Amarnath yatra, the army said today (Friday, Aug 2), adding that a landmine with Pakistan ordnance factory markings and a sniper rifle were found on the route of the pilgrimage.

The Amarnath yatra has been suspended and the yatra route was being “sanitised for three days”, the army said.

General Officer Commanding (GOC) of Srinagar-based 15 Corps (also called the Chinar Corps)Lt General KJS Dhillon, addressing a joint press conference along with JK DGP Dilbag Singh and IG CRPF Zulfiqar Hasan, said, “In the last three-four days, there were confirmed intelligence reports that terrorists backed by Pakistan and its army is trying to disrupt Amarnath Yatra and based on that a thorough search was conducted. We had major successes in these searches.”

During searches, identities of terrorists were recovered, along with caches of arms, ammunition and explosives.Among the Army’s finds were a landmine with Pakistan ordnance factory markings and an M-24 American sniper rifle with a telescopic sight, he said.

“We have eliminated most of the top leadership, but the job is still in progress,” he added.

Speaking about infiltration bids and ceasefire violations on the Line of Control, the Lt General said the situation is under control and “very much peaceful”.

Lt General Dhillon said that IED threats had increased in the last year with several attempts made to blow up security forces vehicles or installations. “There was a failed IED attempt in Banihal in June and on August 2, one of the army vehicles was targeted,” said Lieutenant General Dhillon adding that one IED expert Munna Lahori was killed by security forces last week.

In an appeal to mothers, Dhillon stated 83 per cent of terrorists have a record of stone-pelting. “Stone pelters are tomorrow’s terrorists,” he said, adding it is likely that terrorists will be eliminated within one year of picking up weapons.

Meanwhile, J&K government has advised tourists and Amarnath pilgrims to curtail their stay in the Valley, reports PTI. The state government issued an order in this regard.

DGP Dilbag Singh, on being asked about the increase in troop numbers in J&K, said: “We had been into a number of activities since last few months. Our troops that have been deployed did not get a chance to relax for a while.”

He said that the state police is getting inputs that violence levels are likely to be increased by militants. “So, we’ve tried to strengthen grid on the ground. Also, we’ve been told that troops must get time to relax. This is time for turnover. But grid will be in as much active form as required,” he told ANI.

The Centre had deployed 10,000 personnel to the Valley last week to “strengthen CI grid as well as for maintaining law and order”. The deployment comprised of 50 companies of the CRPF, 30 companies from the SSB and 10 companies each from the BSF and the ITBP.