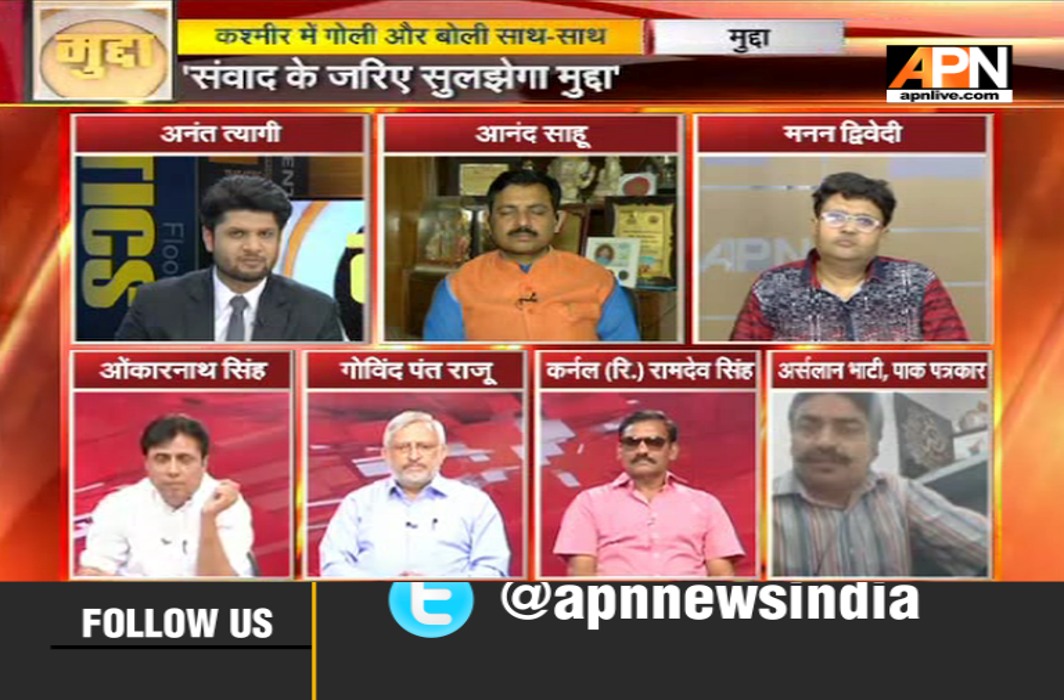 Mudda panellists feel that Pakistan’s image has been dented internationally, and it should focus Track II talks on development

Major Rohit Shukla, who has been hailed as a hero for gunning down Hizbul Mujahideen commander Sameer Bhat alias “Sameer Tiger” in Kashmir on Monday, is battling for life. On the other hand, India and Pakistan held a Track-2 dialogue in Islamabad after a long gap. The meeting was a revival of the Neemrana dialogue among former diplomats and military officials on both sides.  Does the centre have a dual policy towards Pakistan? APN’s popular debate Mudda took up the issue of India’s ties with its difficult neighbour. Anchorperson Anant Tyagi posed the questions to panellists including BJP’s Anant Sahu, Congress’s Omkar Nath Singh, foreign affairs expert Manan Dwivedi, Pakistani scribe Arslan Bhatti, defence expert Col Ramdev Singh and APN consultant Govind Pant Raju.

Dwivedi said: “It’s a good sigh that talks have restarted. But relations have been sour because Pakistan is always the first to attack India’s weak points, like an earthquake calamity, floods and so on. India should de-recognise Pak as a nation state.”

Raju said: “With the talks, at least some sign of hope for thaw is there, even if it’s a slim hope. India has always wanted peaceful ties with neighbours. Even with Sri Lanka, despite a battered past, India is keen to have good ties. Pakistani artistes have been welcome in India. India has never wanted enmity with Pakistan.”

Bhatti said: “There is no alternative but to restart talks. Both sides need to hear each other. Pakistan has never been isolated internationally… If someone has fever in India, blame goes to Pak. How can we have peaceful relations in these circumstances? We should have cricket and tennis matches between the two countries. Pakistan is against terrorism.”

Col Singh said: “Pak youth are told in schools that India is the enemy and Pak needs to avenge the enemy. Diplomatic talks are not new. These happened after Kargil war, and after Mumbai attacks, and so on. Pakistan teams are tutored to only talk about Kashmir—and that’s the reason why the stalemate persists. Track 1 diplomacy failed. Track 2 will also fail if Pakistan continues to think only of blocking the talks”

Sahu said: ”Pak government is a zero; the army is the hero there. The thinking in Pakistan is to unleash bloodshed in India. Cross-border terrorism has to stop.

Singh said, ”There’s nothing wrong with the talks. If the main dispute is regarding Kashmir, how does that affect the junta there? Aren’t they more bothered about development? Cultural and sport exchanges have been there, but despite that, the officials who come for the talks only harp on Kashmir.”

Bhatti said: ”Instead of cornering Pak, India should listen to what the Kashmiris want.”

Raju said:”Pakistanis also want to see some kind of change, and a big move towards development.”

Bhatti said:”Our mudda is Pak awam (the common man). There should be no pre-conditions for talks.”

Dwivedi said: “Pakistan is being seen as a failed state like Afghanistan, though it is not at that level.”

Sahu said:”Pakistan is getting isolated, and except China it’s not getting support from any other country. China is also holding Pakistan’s hand for its own interests.”

Col Singh said: ”Pakistan is in a win-win situation. Bloodshed happens in India; Pak doesn’t face such losses. Diplomatic talks are welcome. But some points must be borne in mind: Kashmir is our part; China cannot have a road on disputed land; Military should not have to suffer due to failure in diplomacy talks; Pakistan is an adamant neighbour.”

Dwivedi said, ”Even cultural diplomacy has not yielded results. Both heads of state must meet for talks.”

Raju said, ”Let’s hope that small steps would lead to a bigger thaw, though the road is long.”

Singh said: “Pakistan’s junta, artists, sportspersons are on one side, and the Pakistan army on the other. The road ahead is one of peace that will lead to development as well.”