The Uttar Pradesh government claimed that the project would create more than one lakh job opportunities. The airport will also be the country's first net zero emissions airport. 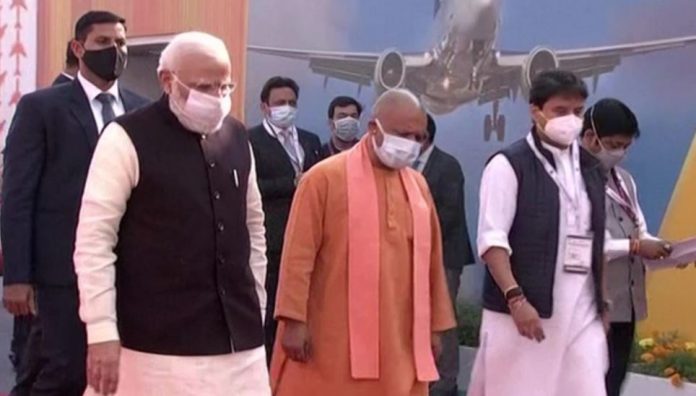 Prime Minister Narendra Modi on Thursday laid down the foundation stone of Noida International Airport, near Jewar in Uttar Pradesh’s Gautam Buddh Nagar district and called it the logistics gateway for North India.

Construction work for the airport has begun, and its operations will begin by 2024 before the next General Elections. Once it becomes operational, Uttar Pradesh will have 5 international airports, the highest for any state in India.

The airport will be spread over 1,334 hectares of land and will have a capacity to serve around 1.2 crore passengers.

Keeping in mind the farmers protest and farm laws rollback, PM Modi said the Noida airport would help them export their vegetables, fruits and produce directly to the world.

Commenting on land acquisition for the airport, PM Modi said he used to see many projects where land was taken from farmers, and neither were they compensated properly nor did the projects kick-off. The government has taken all their decisions keeping in mind India’s progress, farmers’ betterment, project and regional betterment, he said.

Days before PM Modi’s visit, the Jewar airport were ran into controversy over protests from farmers who have camped in tents barely 700 metres from the airport. The farmers were claimed that they were either not paid or not given alternative houses, as promised.

Taking a swipe at the opposition ahead of next year’s UP election and the 2024 Lok Sabha election, PM Modi said developing India is politics for the opposition.

The Uttar Pradesh government claimed that the project would create more than one lakh job opportunities. The airport will also be the country’s first net zero emissions airport.

The first phase of the aerodrome is being done at a cost of more than Rs 10,050 crore, and the ground work regarding land acquisition and rehabilitation of the affected families has been completed, an official release said on Tuesday.

The airport at Jewar will help decongest the Indira Gandhi International (IGI) airport in the national capital. It is strategically located and will serve the people of cities including Delhi, Noida, Ghaziabad, Aligarh, Agra, Faridabad and neighbouring areas, the release said.