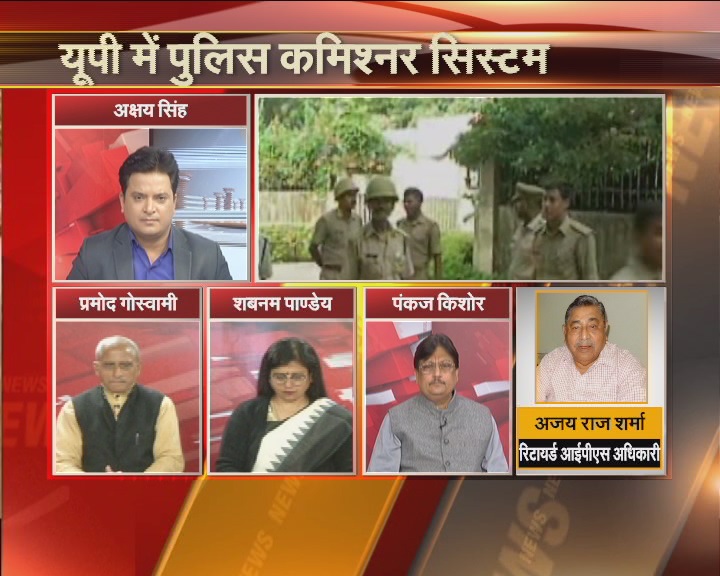 The Uttar Pradesh cabinet has approved a proposal to set up the police commissioner system in Lucknow and Noida, as a pilot project. Alok Singh will be Commissioner, Noida, and Surjit Pandey, Commissioner, Lucknow. Chief Minister Yogi Adityanath said that two women officers of Superintendent of Police (SP) and Additional Superintendent of Police (ASP) ranks each are being deployed to curb crimes against women in the new police commissionerates. The Chief Minister asserted that the new system will help in improving the law and order situation in the state. APN’s popular debate Mudda discussed the issue. Anchorperson Akshay posed the questions to the panelists, including the BJP’s Shambam Pandey, PSPL’s Farhat Khan, retired IPS officer Ajay Raj Sharma, and noted scribes Panjak Kishore and Pramod Goswami.

Kishore said: “Since the last 50 years, talk has been there to have the police commiserate system, from time to time. In reality, our systems are old. The IAS controls the CRPC and IPC. Now power will move to the new commissioners. Look at the crime situation in Noida, police still have no clues regarding the killing of corporate employee Gaurav Chandel. Effective police administration is needed to curb crime.”

Sharma said: “Since 1977, there has been a demand that big towns in the country–and there are over 5 lakh such towns–should have a police commissioner system. England has the system. This is the need of the hour. The DM is head of the administration, but there is divided loyalty. Now the commissioner will have magisterial powers too, to place a town under curfew, and so on, in times of riot, for example.” Sharma added that the IAS lobby will fight for their turf, but this system is very successfully employed in London and New York too.

Goswami said: “Sharma has been IG and DIG, and I respect him a lot for his work. The success of the commissioner system will also depend on the particular officer and the political pressures at work. Sharma has never allowed any pressure on him. The point is to deal with the counter-pressures. I have myself seen Sharma in Farrukhabad, he has not allowed any pressure to prevail upon him.”

Pandey said: “Whenever there’s a new law, people talk about both the negatives and the positives. I would like to quote Munshi Premchand in Panch Parmeshwar and say that accountability comes with the post. So the concerned officers will feel responsible. It is indeed a welcome move and the DM will get to focus on his/her other responsibilities.”

Sharma said: “See, right now magisterial powers are not with the police, still there’s lawlessness. In the commissioner system, accountability and responsibility both will be with the police.”

Khan said: “What’s wrong with the existing law ? Why make more laws? In UP, there would be fear and competition among the IAS and the police. Licence raj will be effectively put in place. In JNU, how come police allowed goondas inside the campus?”

Kishore said: “The effort is to improve governance. IAS lobby will resist and that would lead to confrontation. See, the police and the people will remain the same, what’s needed is an attitudinal shift.”

Goswami said: “True the people are the same, but checks and balances will be there. People show more responsibility when power is thrust upon them. Sujit Pandey is a highly acclaimed officer.”

Pandey said: “The IAS-IPS tussle is only since it’s just been announced. It will all settle down. This is as a pilot project for Noida and Lucknow. People will remain the same, but all people are different. People will get adequate scope to show their efficiency. We need to trust the officers.”

Khan said: “I can’t understand, only names are being changed. As far as efficiency is concerned, the police force gets a lot of opportunities to show that. I am fearful, officers will get busier, people’s representatives will have problem.”

Kishore said: “This law is for the common man. I am hopeful that a lot will change for the better.”

Karnataka Chief Minister BS Yediyurappa on Saturday held an emergency meeting at his residence to assess the covid-19 situation in the country. This comes a day after when the state recorded 14,738, out of these 10,497 were reported in Bengaluru on April 15.
Read more
Load more