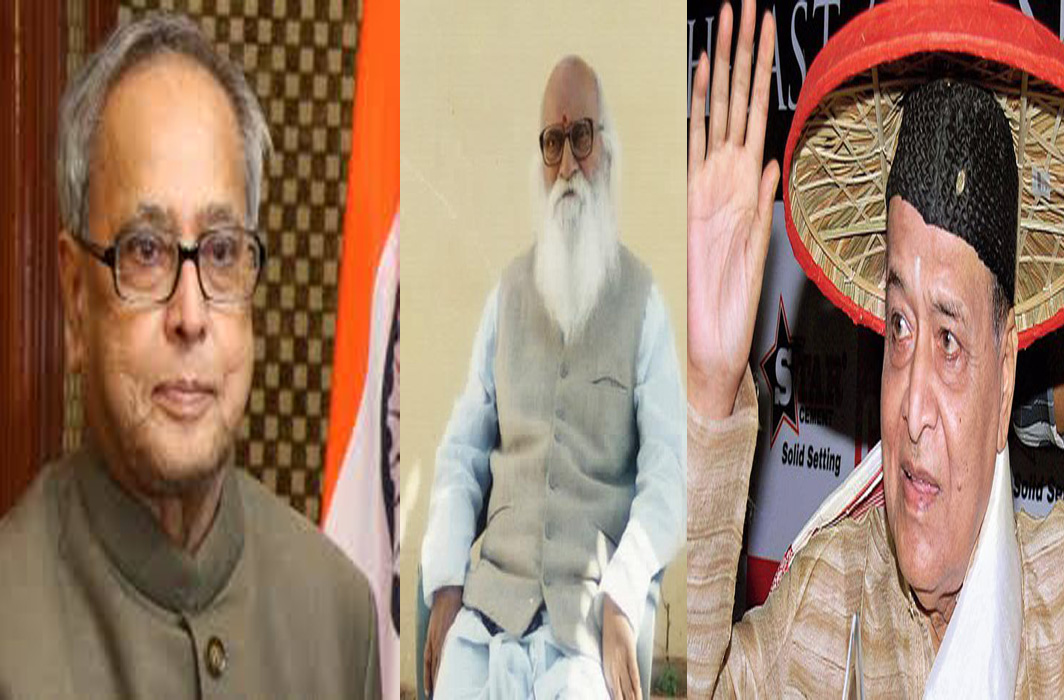 President Ram Nath Kovind gave away the award to Mukherjee, Hazarika’s son Tej and Vikramjeet Singh, a close relative of Deshmukh as Hazarika and Deshmukh were given the Bharat Ratna posthumously.

However, News agency ANI reported that the most prominent members of Congress party: Former Congress president Rahul Gandhi and UPA chairperson Sonia Gandhi were not present for the ceremony. Former Prime Minister Manmohan Singh was also not seen at the event.

The Bharat Ratna has been conferred after a gap of four years. Former prime minister Atal Bihari Vajpayee and founder of Banaras Hindu University Madan Mohan Malviya were given the award by the Narendra Modi government in 2015.

Mukherjee (83) was the president of the country between 2012 and 2017. Prior to that, in 1982, at the age of 47, he became India’s youngest finance minister. From 2004, he went on to head three crucial ministries — external affairs, defence and finance — and became the first occupant of the Rashtrapati Bhavan to have this distinction.
Mukherjee expressing heartfelt gratitude for the honour tweeted, “The Bharat Ratna for me is also indeed an acknowledgment of the millions who strive every day to make Bharat – the diverse, plural, compassionate and inclusive idea that it is.”

Nanaji Deshmukh was one of the founder members of the Bharatiya Jan Sangh, which later evolved as Bharatiya Janata Party. He was known for starting a chain of RSS-inspired schools throughout India. He was also one of the architects of the Jai Prakash Narayan’s movement against the Emergency in 1975 and amongst the key persons in the formation of the Janata Party government in 1977. He made immense contribution in the fields of education, healthcare and rural development. He died at the age of 94 in 2010 in Satna, Madhya Pradesh.

Bhupen Hazarika was a playback singer, lyricist, musician, singer, poet and filmmaker from Assam. He introduced folk music of Assam and North East to Hindi cinema and popularized India’s musical traditions globally. He was awarded Sangeet Natak Akademi Award (1987), Padma Shri (1977), Dada Saheb Phalke Award (1992), Padma Bhushan (2001) and Padma Vibhushan (2012-posthumously). In 2004, he had unsuccessfully contested the Guwahati Lok Sabha seat on a BJP ticket. He was also an Independent MLA in Assam during 1967-72. He died in 2011.

With these three recipients, 48 eminent people have been conferred the Bharat Ratna so far.

Although the Gandhis stayed away from the ceremony, other Congress leaders Ahmed Patel, Sushil Kumar Shinde, Adhir Ranjan Chowdhury, former vice-president Hamid Ansari and Shashi Tharoor attended the programme. Chief Justice of India Ranjan Gogoi was present at the event.

Although, the reason for the Gandhis’ absence was not known, in June 2018, there was a rift between the party leaders and Pranab Mukherjee at the latter’s decision to attend a meet of the Rashtriya Swayamsevak Sangh (RSS), the ideological mentor of the BJP, at Nagpur.  It was reportedly frowned upon by the Congress leadership.