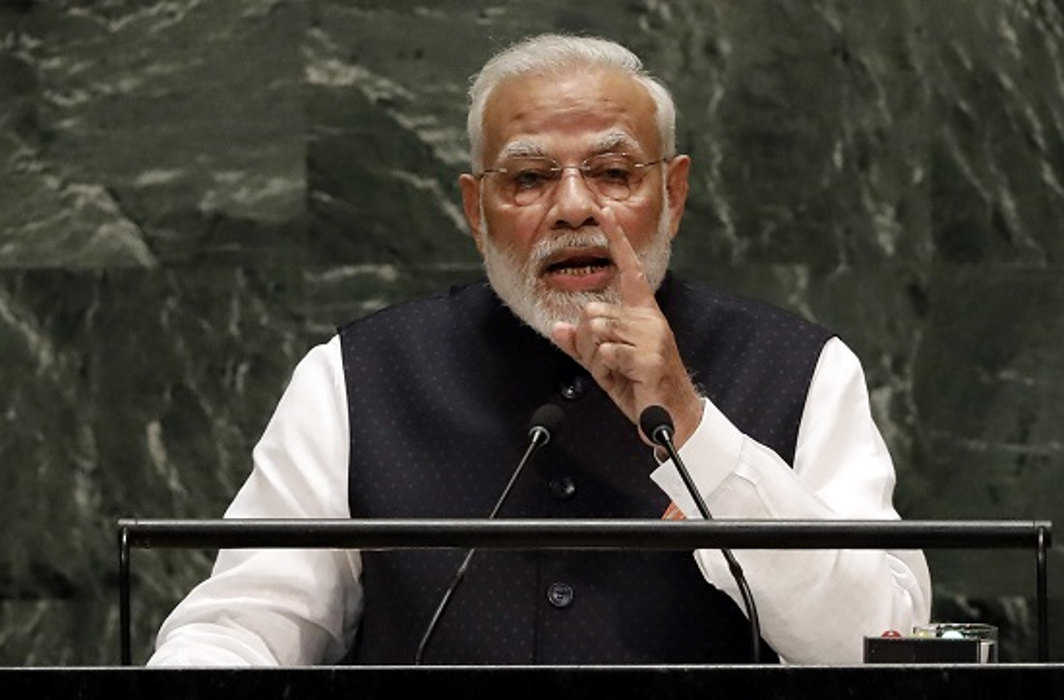 It is a great honour for me to address the 74th Session of the United Nations on behalf of 1.3 billion Indians.

It is a very special occasion, also, because this year, the entire world is celebrating the 150th birth anniversary of Mahatma Gandhi.

His message of truth and non-violence is very relevant for us even today, for peace, development and progress in the world.

And it is thanks to this mandate that I am standing here before you once again.

However, the message that this mandate conveys has an even greater significance, a wider and more inspiring one.

When a developing country is able to successfully implement the world’s biggest sanitation campaign within the Clean India Mission, building over 110 million toilets in just 5 years for its countrymen, all its achievements and outcomes are an inspirational message for the entire world.

When a developing country, successfully runs the world’s biggest health assurance scheme, giving 500 million people the facility of an annual health cover of 500,000 Rs for free treatment, the achievements and responsive systems that result from this scheme show the world a new path.

When a developing country, successfully runs the world’s biggest financial inclusion scheme, opening over 370 million bank accounts for the poor in just 5 years, the systems that result, build confidence in the poor across the entire world.

As I came in here, on a wall at the entrance to this building, I noticed the call to make the United nations free of single-use plastic.

I am pleased to inform this august assembly that even as I am addressing you today, a very large campaign is being started across the entire country to make India free of single-use plastic.

In the next five years, apart from promoting water conservation, we are going to ensure water supply to 150 million homes.

In the next five years, we are going to build over 125,000 kilometers of new roads.

By the year 2022, when India celebrates its 75th Independence Day, we plan to build 20 million houses for the poor.

Though the world may have set itself the target of eradicating TB by 2030, in India we are working towards eradicating it by 2025.

The question that arises is just how have we been able to achieve all of this. How is it that such rapid changes are taking place in India?

India is a great culture that is thousands of years old, a culture that has its own vibrant traditions, and which has encompassed universal dreams. Our values and culture see divinity in every being and strive for the welfare of all.

And that is the reason we draw inspiration from our motto: Collective efforts, for growth of all, with everyone’s trust.

And this too, is not confined within the borders of India.

Our endeavours are neither an expression of pity, nor a pretense. They are inspired by a sense of duty, and duty alone.

The efforts are ours, but their fruits are for all, for the entire world.

And this conviction of mine gets stronger every day, when I think of those countries, who, just like India, are striving for development, each in their own way.

When I hear about their joys and sorrows, when I get to know about their dreams, my resolve to develop my country at a faster pace gets even stronger, so that India’s experience can be beneficial to these countries.

3000 years ago, a great poet of India, Kariyan Pungun-dra-naar, wrote in Tamil the most ancient language of the world:

This sense of belonging beyond borders is unique to India.

In the last 5 years, India has worked towards strengthening its centuries-old great tradition of fraternity among nations and welfare of the world, which is indeed, in line with the key objectives of the United Nations.

The issues that India raises, the kind of new global platforms that India has come forward to build, seek collective efforts to address serious global challenges and issues.

If you look at it from a historic and per capita emission perspective, India’s contribution to Global Warming is very low.

However, India is one of the leading nations when it comes to taking steps to address this issue.

On one hand, we are working towards achieving the target of 450 GigaWatts of renewable energy, and on the other hand, we have also taken the initiative to create the International Solar Alliance.

One of the effects of Global Warming is the increasing number and severity of natural disasters, and at the same time they are appearing in new areas and in new forms.

In view of this, India has initiated the formation of the “Coalition for Disaster Resilient Infrastructure” CDRI. This coalition will help build infrastructure which can withstand natural disasters.

The largest number of supreme sacrifices made by soldiers of any country for UN Peacekeeping missions is from India.

We belong to a country that has given the world, not war, but Buddha’s message of peace.

And that is the reason why, our voice against terrorism, to alert the world about this evil, rings with seriousness and the outrage.

We believe that this is one of the biggest challenges, not for any single country, but for the entire world and humanity.

The lack of unanimity amongst us on the issue of terrorism dents those very principles that are the basis for the creation of the U.N.

The face of the world is changing today.

In such a situation, a fragmented world is in the interest of no one.

Neither do we have the option to confine ourselves within our boundaries.

In this new era, we will have to give new direction to Multilateralism, and to the United Nations.

One Hundred and Twenty Five years ago, the Great Spiritual Guru, Swami Vivekananda, gave this message to the world during the World Parliament of Religions in Chicago.

The message was, “Harmony and Peace. And not Dissension”.

Today, the message from the world’s largest democracy, for the International community is still the same: “Harmony and Peace”.

Thank you Very much.