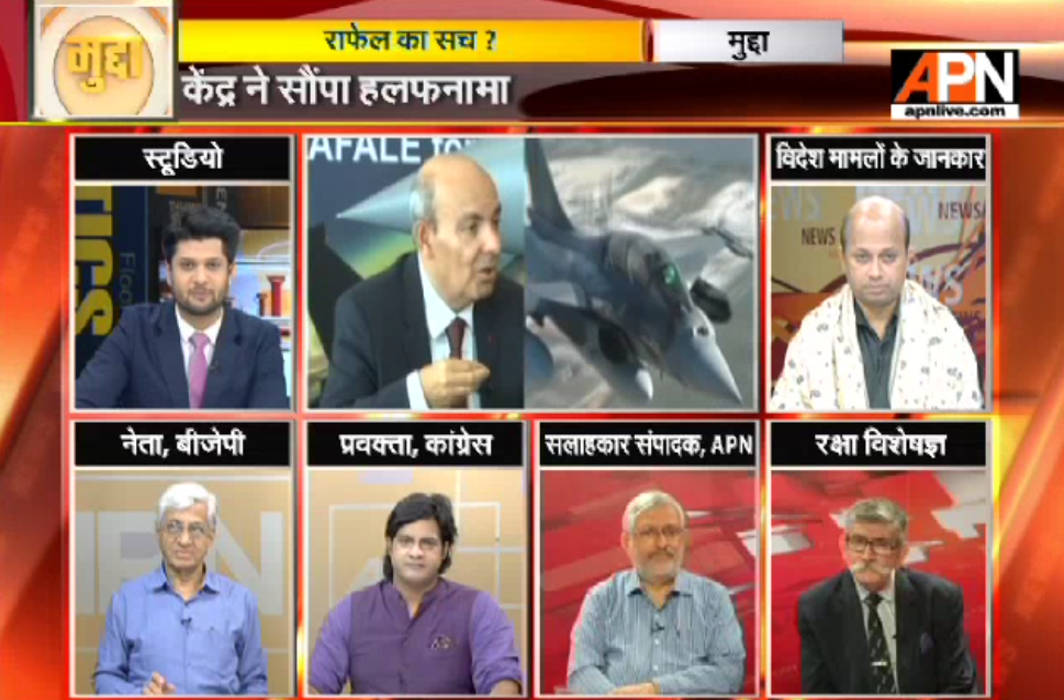 Khan said: “It is clear who is telling a lie. French senior executives have said the deal is with Modi and Ambani. The mudda is now national interest versus secrecy. SC has asked for the rates. Rahul Gandhi is rightly saying Rs 30,000 cr have been handed over to Ambani. The French president’s statements have been changed. France stands to gain in this deal. But at every stage, there has been manipulation.”

Maj Gen Chaturvedi said: “Since 2001, there has been an escalation in costs, and the prices rose astronomically when the deal was signed. We need to know more about the offset deal. Engine, electronic gadgets, landing gear, all these costs have to be factored in. As per such deals, 30 percent of the profits have to go in for research. There are other offset partners. Reliance is not the only one. HAL refused to go for the deal.”

Dutta said: “I have a poster of a Congress party rally, written ‘Ra faile’ meaning ‘Rahul Gandhi fail’. Hollande, former president of France, gave the original interviews in French. There came about a difference in interpretation. This was a JV for offset with Reliance and Dassault. When the UPA government came, the deal was not signed. Price escalation happens.”

Khan said: “The said poster is a protest against Rafale. Dutta is behaving like a BJP representative.”

Khera said: “Congress is making allegations. Let me explain, Rahul Gandhi is on a lying spree. How come the Congress leader refuses to listen to the experts. Rahul is acting on his own, echoing the same thing again and again. Reliance is eventually getting Rs 4,500 core only. ‘Rs 30,000 crore for Reliance’ is a lie.  Second, there is a lot of difference in the earlier Rafale and now, a lot of upgrade and change in technology is there.”

Raju said: “Congress is raising slogans like this in view of the upcoming polls, and wants to play the Rafale card. Parliament too has discussed the issue, and the matter is with the Supreme Court. Congress is changing its arguments. First it was regarding the costs, then Anil Ambani. It is being projected that the deal is done only for Anil Ambani. If this was such a serious matter, Congress should have taken up this in Parliament seriously. I disagree with Saif Khan that all information is available on Amazon. Deals are not done like this. Congress is saying there is pressure on French president. But for France, India is not the only market.”

Captain Vanjarim said: “Whether is it Congress or the BJP, allegations tend to fly. I don’t see a clarity in this deal. I am all for an inquiry into this deal. But there is public money wasted in inquiries. I hope democracy becomes better in the coming days, and there is more transparency.”

Khera said: “There are secrecy clauses, just like in the time of the surgical strikes.” and Amazon. Government is hiding behind the national interest clause.”

Khan said: “Anil Ambani’s companies are in debt, it is clear who is the beneficiary.”

Khera said:”Why should we weaken ourselves publically, when we need to think of the nation’s interests.”

Raju said: “Government has spoken about the secrecy clause in parliament. But since the Supreme Court is hearing the matter, Congress should be patient, as the government will come out clearly on this.”