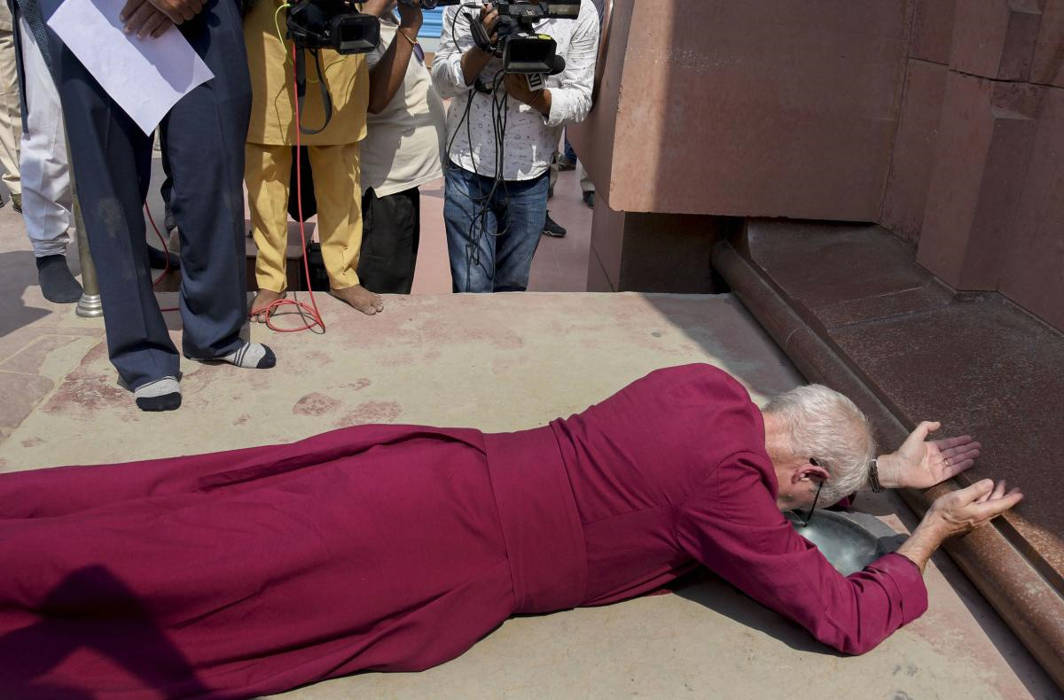 The Archbishop of Britain’s Canterbury, Justin Welby, visited Amritsar’s Jallianwala Bagh national memorial on Tuesday (September 10) and, prostrating himself on the floor, mourned the tragedy of 1919, according to media reports.

Welby said it was “deeply humbling” and he felt “profound shame.” “My first response is to pray for healing of relatives, of descendants, of our relationships with India and its wonderful people. But that prayer renews in me a desire to pray and act so that together we may learn from history, root out hatred, promote reconciliation and globally seek the common good,” he wrote in the visitors’ book.

Archbishop Welby also tweeted about his visit and shared photos.

My first response is to pray to God for healing for those still suffering grief, loss and anger. And prayer means I must also commit to actions that bridge divides of culture and religion – that together we can root out hatred and seek the common good.

“You have remembered what they have done and their memory will live. I’m ashamed and sorry for the crime committed here, as a religious leader I mourn the tragedy,” Archbishop Justin Welby said.

“I feel a deep sense of grief, humility and profound shame having visited the site of the horrific Jallianwala Bagh massacre in Amritsar today. Here, a great number of Sikhs – as well as Hindus, Muslims and Christians – were shot dead by British troops in 1919,” he tweeted on Tuesday, September 10.

I feel a deep sense of grief, humility and profound shame having visited the site of the horrific #JallianwalaBagh massacre in Amritsar today.

Here, a great number of Sikhs – as well as Hindus, Muslims and Christians – were shot dead by British troops in 1919. pic.twitter.com/p5fDprIMbr

“The site of the #JallianwalaBagh massacre is a place of both sin and redemption. The souls of those killed, injured and bereaved cry out to us about the misuse of power. They will live on and be remembered before God,” he added.

The site of the #JallianwalaBagh massacre is a place of both sin and redemption. The souls of those killed, injured and bereaved cry out to us about the misuse of power. They will live on and be remembered before God.pic.twitter.com/SInpCjcbJc

The Archbishop also wrote on his Facebook wall, he has “no status to apologize on behalf of the UK, its government” and was “personally very sorry” for the atrocity.

“To say sorry as a Christian is to turn around and take a new direction alongside voicing words of apology. When there is something on the scale and horror of this massacre, and done so many years ago, words can be cheaply bandied around, as if a simple apology would ever be enough.”

He said, “Learning of what happened, I recognize the sins of my British colonial history, the ideology that too often subjugated and dehumanized other races and cultures. Jesus Christ calls us to turn away from sin and to turn to Him as Lord. We are called to not just repent of old ways but to intentionally live in a new way that seeks the Kingdom of God here on earth”.

Britain has never formally apologized for the tragedy; former Prime Minister Theresa May had on the 100th anniversary of the massacre said she “deeply regretted” the tragedy.

On the 100th anniversary of the Jallianwala Bagh tragedy in April this year, the Archbishop had condemned the massacre and said, “As British people we can’t avoid this shameful part of our colonial legacy.”

100 years after the #JallianwalaBaghMassacre, as British people we can't avoid this shameful part of our colonial legacy.

Today is a day for reflection, lament and prayer for healing between faith communities around the world. #Amritsar #JallianwalaBagh pic.twitter.com/vbVKIQlvUl

On the afternoon of April 13, 1919, some 10,000 people gathered at the Jallianwala Bagh, an area in Amritsar surrounded by high walls with only one exit. People were angry in particular about the arrests of two local leaders. April 13 was also Baisakhi, a harvest festival in northern India. The crowd included men, women, children and pilgrims who were visiting the nearby Golden Temple, one of the holiest sites in Sikhs.

British troops opened fire on the crowd of unarmed protestors on April 13, 1919. The number of casualties is unclear with colonial-era records showing about 400 deaths while Indian figures put the number at closer to 1,000.

Archbishop Welby is on a 10-day India tour and has visited Kolkata, Medak, Jabalpur and Bengaluru.