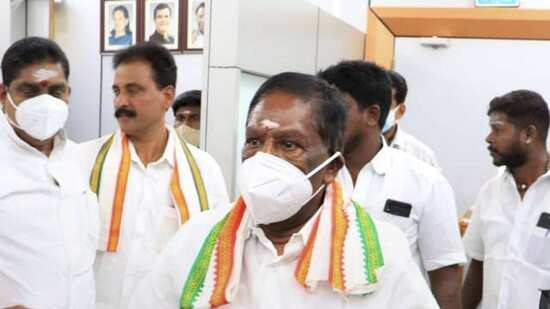 The Congress government its majority in Puducherry on Monday and Chief Minister V. Narayanasamy resigned. After two exits on Sunday, the the Congress-DMK numbers had dropped to 12 MLAs in the house where the majority mark is 14.

The effective strength of the house is 26, while the opposition alliance has 14 MLAs. Referring to the MLAs who resigned, Narayanasamy had said MLAs should stay loyal to the party. MLAs who have resigned will not be able to face the people as people will call them opportunists.

Currently, though, the numbers are heavily stacked against the government. The Congress has nine MLAs, including the Speaker, and DMK two while the government also enjoys the support of one Independent MLA. The Opposition alliance has seven MLAs of All India NR Congress and four of AIADMK, apart from three nominated MLAs from the BJP. With just three months left for Assembly polls, there are also reports of the Congress holding talks with some AIADMK MLAs to save the government.

Following a demand from the Opposition, the floor test was ordered on Thursday by Tamilisai Soundararajan, the Telangana Governor, immediately after she was handed additional charge of Puducherry. Soundararajan was sworn in after the former Lt. Governor Kiran Bedi was removed from the post.

The BJP is also making a strong pitch in Tamil Nadu and Kerala as well. The induction of Delhi Metro founder E.Sreedharan into the BJP ranks in Kerala is likely to add hope for the party from Delhi while it may not amount to much in Kerala itself where the congress-led UDF is said to be unveiling a soft Hindutva line.