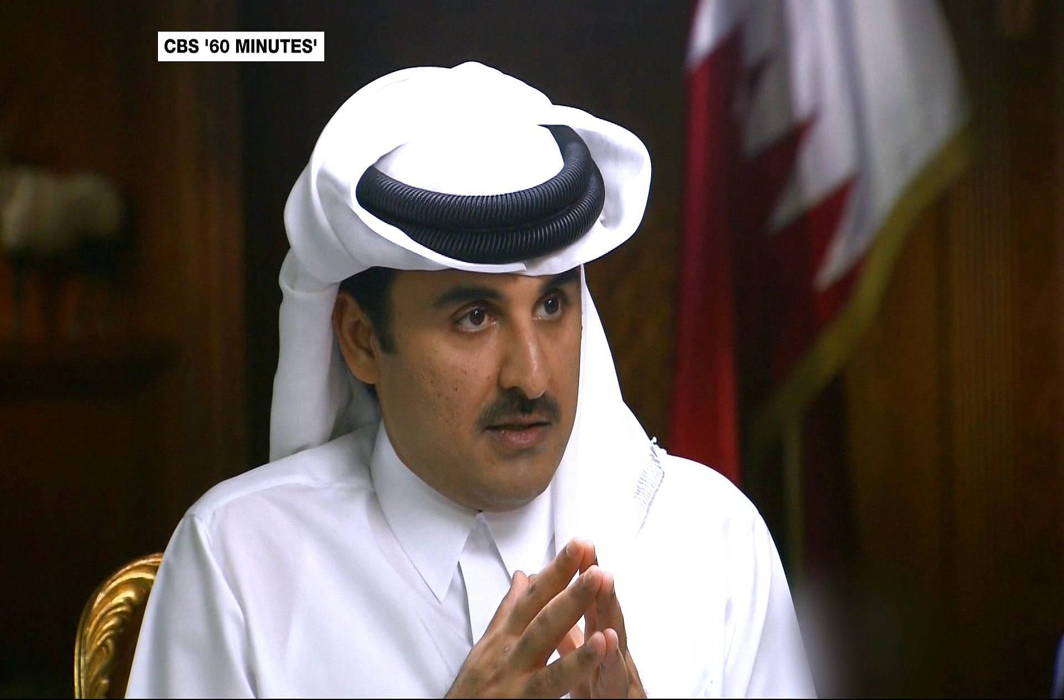 Ready for direct talks for resolving the crisis, says emir

Qatar’s ruler Sheikh Tamim bin Hamad Al Thani has accused the Saudi-led quartet of seeking “regime change” in his country and asserted that he will not bow to pressure and his country’s independence and sovereignty is a “red line”.

Responding to questions during CBS interview for “60-Minute” show, Qatari emir said, “Our sovereignty is a red line. We don’t accept anybody interfering our sovereignty. They don’t like our independence, the way how we are thinking, our vision for the region.”

However, Qatari emir expressed his willingness to attend US hosted direct talks to put an end to the diplomatic crisis but added that he has yet to hear the response to Trump’s offer to held meeting at his retreat in Camp David. He said, “We want it [the crisis] to end. But nothing is going to be above our dignity, our sovereignty.”

He further clarified saying, “But we want it to end, I always say that. If they (are) going to walk one metre toward me, I’m willing to walk 10,000 miles towards them.”

Recently, US Secretary of State Rex Tillerson, while addressing media persons along with his Qatari counterpart Sheikh Mohammed bin Abdulrahman Al Thani in Doha on October 23, had conceded that Saudi authorities were not ready for direct talks. He was quoted saying, “We cannot force talks upon people who are not ready to talk.”

Qatari emir said that it was “obvious” that the Saudi-led quartet is trying to force a change of leadership in Qatar. He said that “History as well tells us, teaches us, they tried to do that before, in 1996 after my father became the emir.”

He further said, “We want freedom of speech for the people of the region and they’re not happy with that, and so they think that this is a threat to them.”

Recalling people’s rise against their governments in several regional countries during Arab Spring (during 2011-12), the emir said that his country “stood by the people”.

Referring to the late May Arab-Islamic-American summit, held in Riyadh, which was attended by US President Donald Trump and representative of 55 countries, Qatari emir said, “A few weeks before that, we were meeting, all of us together, in one room, including President Trump. We were discussing terrorism, financing terrorism, and nobody brought any concern from those countries. Nobody told me anything.”

While describing the sudden severing of ties by Saudi Arabia, UAE, Bahrain and Egypt on June 5, along with road, air and trade blockade, the emir said, “ It was a shock.”

On June 22, the blockading countries issued a 13-point list of demands, including shutdown of Aljazeera network, limiting ties with Iran, expelling Turkish troops from its territories and stop helping terror groups. Doha rejected all the demands.

Responding to a question about the presence of Taliban office in Qatar, the emir said, “The reason why they came here, it’s not because we asked them to come. America asked … They wanted to have dialogue so they asked us if we can host them here and have the dialogue. So we hosted them here, this is the reason why they’re here.”

The emir denied Doha’s alleged support to terror groups saying, “When they [blockading countries] talk about terrorism, absolutely not. We do not support terrorism.”

He also rejected the blockading quartet’s demand of closing down Aljazeera. He said, “We’re not going to shut down Al Jazeera.”

He further clarified saying, “When you tell me to close a channel like Al Jazeera, history will write one day in 50, 60 or 70 years how it changed the whole idea of free speech in the region.”

This was the first public statement from the emir since this crisis began in June this year.

Sheikh Tamim became emir in 2013 at the age of 33, after his father, Sheikh Hamad bin Khalifa Al Thani, transferred power to him.