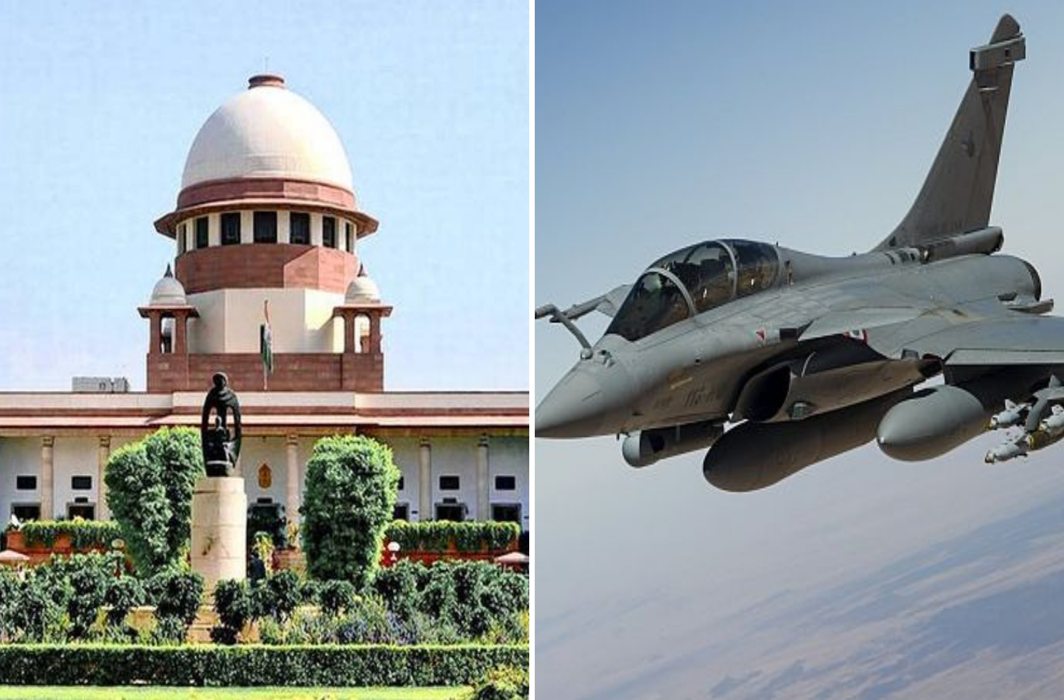 The Supreme Court today (Thursday, March 14) reserved in judgment on petitions seeking review of its December 14 verdict, that rejected pleas for a court-monitored probe into alleged irregularities in the Rafale deal, contending that the government had misled the court and withheld relevant information.

The Centre claimed privilege over documents pertaining to Rafale fighter jet deal produced by the petitioners. Attorney General KK Venugopal, arguing the case before the three-judge SC Bench headed by Chief Justice of India (CJI) Ranjan Gogoi and also comprising Justices SK Kaul and KM Joseph, told the Supreme Court that no one can produce these documents in the court without the permission of the department concerned.

After hearing both sides on the issue, the court reserved its judgment on the admissibility of the documents. It now has to decide whether the hearing on the review petition will continue with or without the documents in question.

The petitioners had appended files, published by the media, to substantiate its claims. The AG had argued that these were photocopies of confidential documents obtained unauthorisedly and the act amounted to theft.

Former union minister Arun Shourie, who is one of the petitioners along with former union minister Yashwant Sinha, thanked AG and the Govt. “We thank the A-G that by saying in their affidavit that these are photocopies, they have proved the genuineness of these documents,” said Shourie.

After hearing the arguments of the government and the petitioners, the Supreme Court reserved its order on the admissibility of the Rafale papers.

While arguing that state documents could not be published without explicit permission as the government had privilege over them, AG KK Venugopal sought removal of the “leaked” files submitted by the review petitioners from the records.

Referring to Section 123 of Evidence Act and provisions of RTI, Venugopal said, “Under the provision of Evidence Act, no one can produce privileged documents in court without permission of department concerned.” Venugopal submitted that the document can be withheld from disclosure RTI Act too.

“What privilege do you (Attorney General) claim? They (petitioners) have already produced them in court. As per Section 22 and Section 24 of RTI Act ‘even intelligence and security establishments are bound to give information about corruption and human rights violations,” the bench said.

“RTI Act of 2005 was intended to bring a revolution, let us not go back,” said Justice KM Joseph stressing on RTI jurisprudence and its effect on disclosure of information which used to be withheld earlier on the grounds of security of State.

AG, resorting back to his “security” argument, said security of the state supersedes everything. “They (petitioners) have produced it after stealing it. State documents can’t be published without explicit permission,” Venugopal said.

“Is it that we (court) cannot even look into the documents even to ascertain whether the same is privileged?” Justice KM Joseph asks Attorney General KK Venugopal.

The petitioners’ counsel argued that the objection by Centre against disclosure of documents is malafide and the purpose of this objection is not to protect national security or defence secrets.

Prohibiting the court to consider the documents already published and in public domain is not the intent of 123, said the counsel for petitioners while contending that arguments advanced by the AG are untenable

He cited SP Gupta judgment that laid down that only test to be applied is test of public interest.

Pointing out that the documents in question have already been disclosed and are already in public domain, the petitioners also drew the court’s attention to the fact that, from time to time, the government itself has leaked these documents to friendly media – like leak of file notings of then Raksha Mantri Manohar Parrikar.

CAG report along with latest affidavit filed by the centre seeking privilege discloses many other defence deals, hence its contrary on AG’s part to say any disclosure of a defence deal possess treat to “national security”, argued the counsel.

At this, the petitioners submitted that certain documents which have been objected to by Centre now were already part of the  petitioners’ submissions when the main case was filed in November last year.

He also cited 2G case wherein “same issue arose regarding disclosure of source” with respect to a register of visitors at a former CBI Director’s residence. In that case, the Supreme Court had turned down forner CBI Director Ranjit Sinha’s request to diclose identity of whistleblower who had accessed the visitors Register of Sinha’s residence.

He also cited judgments laying down that documents illegally obtained is admissible as evidence in court.

Here, he referred to Pentagon Papers case of USA. This was a case on whether defence documents relating to the Vietnam war could be published. The US Supreme Court in an emphatic judgment rejected the govt claim of national security.

“Of course, freedom of speech is much wider in US context, but still much of what was stated in that judgment applies here,” the petitioners argued.

Section 123 of Evidence Act does not apply here because it deals with unpublished documents; In this case documents have already been published, said the petitioners’ counsel, adding that none of the documents they have relied upon has anything to do with national security.

As the hearing concluded, Supreme Court reserved verdict on preliminary objections on maintainability raised by Centre.

Yesterday, the Centre filed an affidavit in the Supreme Court saying that documents attached in the petitions to review its Dec 14 verdict are sensitive to national security and their leakage by photocopying amounts to theft and puts national security in jeopardy.

The affidavit filed by the Ministry of Defence (MoD) asked the court to reject the review plea and said that the petitioners including former union ministers Yashwant Sinha and Arun Shourie are guilty of leaking sensitive information.

“Those who’ve conspired in this leakage are guilty of penal offences including theft by unauthorized photocopying and leakage of sensitive official documents affecting national security. These matters are now subject of an internal inquiry which commenced on Feb 28,” the government told the court.

In the affidavit, the government said the review plea has been widely circulated and is available to the country’s enemy and adversaries. It said that the documents attached by the petitioners in the Rafale review case relate to war capacity of the combat aircraft.

“This puts the national security in jeopardy. Without consent, permission or acquiescence of the Central Government, those who have conspired in making the photocopy of these sensitive documents and annexing it to the review petition/ miscellaneous application and thereby committing theft by unauthorized photocopying of such documents…have adversely affected the sovereignty, security and friendly relations with the foreign countries,” the affidavit said.

It said that even though the Centre “maintains secrecy”, the review petitioners are “guilty of leakage of sensitive information, which offends the terms of the agreements.”

“The petitioners are using unauthorisedly accessed documents with the intention to present a selective and incomplete picture of internal secret deliberations on a matter relating to National Security and Defence,” the affidavit said.

Earlier, on Wednesday, March 6, as the SC Bench began hearing the review petitions, counsel for former Union finance minister Yashwant Sinha, the most high profile petitioner in the case, had urged the court to rap the Centre for perjury.

Placing reliance on a set of documents related to the Rafale deal and the negotiations between the Indian and French sides that preceded it but which came in the public domain after the December 14 verdict, Sinha’s counsel said the apex court had relied upon “a large number of serious errors of fact” while dismissing the prayer for a probe into the deal.

“Those facts were presumably supplied to the court by the Centre in sealed cover notes…Critical material facts were suppressed from the court… the government should be hauled up for perjury,” Sinha’s counsel said.

The Centre had vociferously opposed the review petitions and asked the SC to dismiss them as they were based on documents “stolen” from the ministry of defence. “It’s a criminal act on the part of petitioners to bring these documents with them. They have come with unclean hands,” Attorney General (AG) KK Venugopal had said. However, turn two days later the AG said the documents were not stolen, but the petitioners were using “photocopies of the original” papers.

As Venugopal argued the documents relied upon in the review petitions were “inadmissible” as they had been “procured through unfair means” in violation of the Official Secrets Act, he was interrupted by Justice KM Joseph.

“Issue of national security doesn’t arise when question in review is that plea of investigation hasn’t been considered. Are you going to take shelter under national security when the allegations are of grave crime, corruption,” Justice Joseph asked the Attorney General pointedly.

He added that the legal precedent with regard to admitting “stolen” documents as evidence was settled under the Evidence Act and said further that “if an act of corruption is committed, government cannot take shelter under the Official Secrets Act.”

The Attonery General’s submissions also provoked a pointed query from Chief Justice Gogoi who asked: “If an accused establishes the plea of alibi on the basis of a stolen document, should the court ignore it… Show us the authority that (disclosing the) source is important.”

The Chief Justice then noted that while violating the Official Secrets Act “makes a person liable for criminal punishment for obtaining secret documents”, courts or petitioners can “proceed against the person but will the document become null?”

Justice Joseph also referred to the Bofors case: “There were allegations of corruption in Bofors. Now, will you say the same thing that a criminal court shouldn’t look into any such document in that case? Here we have an open system.”

Justice SK Kaul also told the Centre’s chief law officer: “if the documents were stolen, the government should put its own house in order. It is one thing to say that we should look at these documents with suspicion. But, to say we can’t even look at those documents may not be a correct submission in law.”

Chief Justice Ranjan Gogoi even cited an example to the Attorney General, stating: “an accused is having difficulty in proving his innocence. He steals a document and shows it to the judge. The document clearly shows he is innocent. Should a judge ignore the document?”