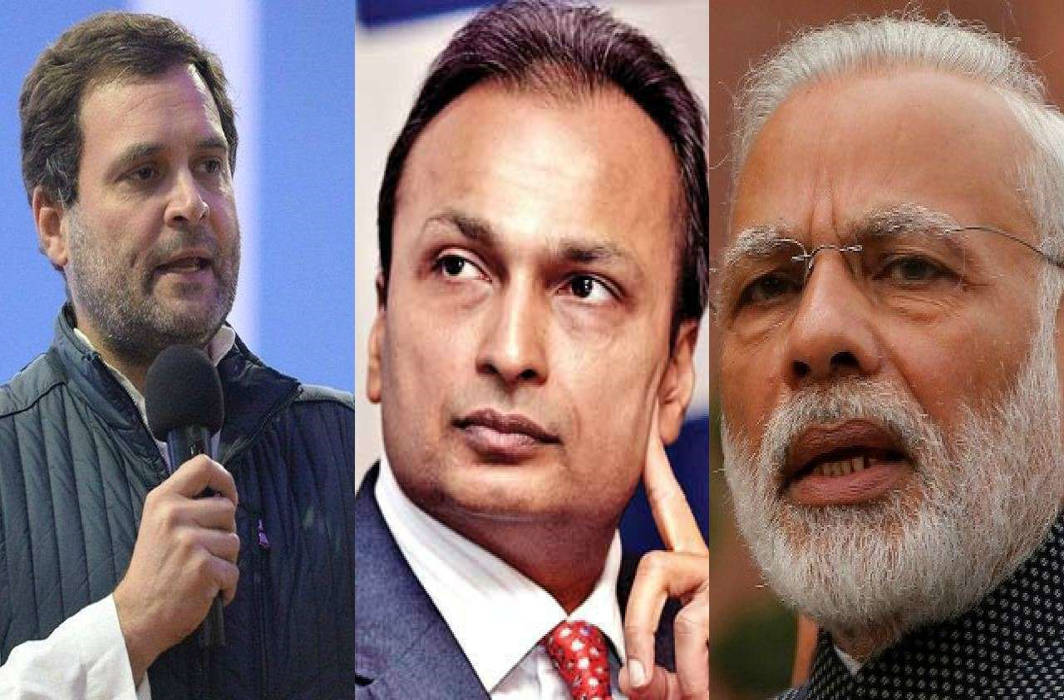 After another explosive news report on the controversial Rafale deal, Congress president Rahul Gandhi today (Tuesday, Feb 12) accused Prime Minister Narendra Modi of passing on information about the memorandum of understanding (MoU) for purchase of the fighter aircraft in advance to Anil Ambani, thereby violating the Official Secrets Act (OSA), compromising national security and opening himself up to criminal prosecution.

Citing a report by The Indian Express (IE), Rahul Gandhi asked how Anil Ambani knew that the deal would materialise 10 days in advance of the official announcement. Rahul Gandhi said in a tweet: “By leaking information on the RAFALE MOU in advance to Anil Ambani, the PM has broken the Official Secrets Act and compromised National Security, opening himself up to criminal prosecution.”

Rahul, addresing a press conference, was reported to have alleged that Modi was acting as a middleman of businessman Anil Ambani. Quoting an email from an Airbus executive to French officials, he alleged what Modi had done amounted to treason, “nothing less”.

“He (Modi) is doing what spies do. He is under oath to protect these secrets. But he has given these secrets to others. This itself is criminal and puts him in jail,” Gandhi said.

Gandhi rubbished the Comptroller and Auditor General’s (CAG) report on the Rafale deal calling it “Chowkidar Auditor General report”. He said the CAG report was “worthless”.

Calling Modi a “corrupt man”, Rahul Gandhi said, “Earlier there was an axis of corruption (involved in the Rafale fighter aircraft deal) and an axis of procedural inconsistencies. And now there is this handing over of defence secret, of compromising national security. All three are to be investigated.”

He said neither the then defence minister Manohar Parrikar nor the foreign secretary nor Hindustan Aeronautics Limited (HAL) knew about the signing of the deal but Ambani did 10 days before it actually happened.

Rahul Gandhi: Now PM needs to answer how did Anil Ambani knew 10 days in advance of the #Rafaledeal. Defence Minister, HAL, Foreign Secy don’t know but Anil Ambani knew.If this is true then PM is in violation of official secrets act,criminal action must be initiated on this basis https://t.co/5c5M7vA2jC

Gandhi reiterated his demand that a joint parliamentary committee (JPC) should be instituted in the Rafale deal. “Institute a probe by the JPC if the PM is not involved,” he said.

(1) If any person having in his possession or control any secret official code or pass word or any sketch, plan, model, article, note, document or information which relates to or is used in a prohibited place or relates to anything in such a place, 13[or which is likely to assist, directly or indirectly, an enemy or which relates to a matter the disclosure of which is likely to affect the sovereignty and integrity of India, the security of the State or friendly relations with foreign States or which has been made or obtained in contravention of this Act,] or which has been entrusted in confidence to him by any person holding office under Government, or which he has obtained or to which he has had access owing to his position as a person who holds or has held office under Government, or as person who holds or has held a contract made on behalf of Government, or as a person who is or has been employed under a person who holds or has held such an office or contract-

(b) uses, the information in his possession for the benefit of any foreign power or in any other manner prejudicial to the safety of the State …

In the press conference, Rahul drew attention to the report that when Ambani had visited French defence minister Jean-Yves Le Drian’s office in Paris in 2015, about two weeks before Modi announced the procurement of 36 Rafale fighter aircraft from France, the businessman mentioned that a “memorandum of understanding is in preparation” and spoke of the Indian government’s “intention to sign it” during Modi’s visit.

When Ambani visited the French Defence Minister’s office, it was known that Prime Minister Modi would make an official visit to France from April 9-11, 2015.

Subsequently, Ambani was part of the PM’s delegation during the visit where the deal for 36 Rafale aircraft was announced by Modi and then French President Francois Hollande in a joint

Incidentally, Reliance Defence was incorporated on March 28, 2015, in the same week as this meeting.

However, speaking to the press just before Modi’s visit, then foreign secretary S Jaishankar had said India does not mix up “leadership level visits with deep details of ongoing defence contract”, ruling out a possibility of the announcement of exactly such a deal.

“In terms of Rafale, my understanding is that there are discussions underway between the French company, our Ministry of Defence, the HAL which is involved in this. These are ongoing discussions. These are very technical, detailed discussions. We do not mix up leadership level visits with deep details of ongoing defence contracts. That is on a different track. A leadership visit usually looks at big picture issues even in the security field,” Jaishankar had told the media.

Public sector HAL was the licensed manufacturer of 108 Rafale aircraft in that contract but has no such role in the new deal.

Anil Ambani’s Reliance Group is the “key partner” for Dassault Aviation, manufacturer of Rafale aircraft, for discharge of offsets in the Euro 7.87 billion deal signed between India and France. The total value of offsets from the deal is estimated to be around Rs 30,000 crore, and Reliance’s exact share in that amount has not been officially confirmed so far.

The Congress alleges that the secrecy shrouding Modi’s surprise announcement of the deal and the fact that Ambani was one of the very few people who knew a state secret that apparently eluded the foreign secretary, points to the fact that Modi kept Ambani informed of the deal.

Responding to the Congress chief’s allegations, Reliance Defence said the “proposed MoU” mentioned in a purported email cited by Rahul Gandhi was a reference to its cooperation with Airbus Helicopter and had “no connection” with the Rafale deal.

“Purported email being referred by the Congress Party is regarding the discussion between Airbus and Reliance Defence regarding Civil & Defence Helicopter Programs under ‘Make in India’,” a Reliance Defence spokesperson said in a statement, reported The Times of India (TOI).

“The discussion on proposed MoU was clearly with reference to cooperation between Airbus Helicopter and Reliance. It had no connection whatsoever with Government to Government Agreement between France and India for 36 Rafale aircraft,” the Reliance Defence spokesperson said.

It is in public domain that Airbus Helicopter has partnered with Mahindra for the Military Helicopter Programme, the spokesperson added.

“Also, for the record, the MoU for Rafale aircraft was signed between France and India on January 25 2016 and not in April 2015. From the above, it is evident that the facts are being deliberately twisted and reality being ignored,” the company said.