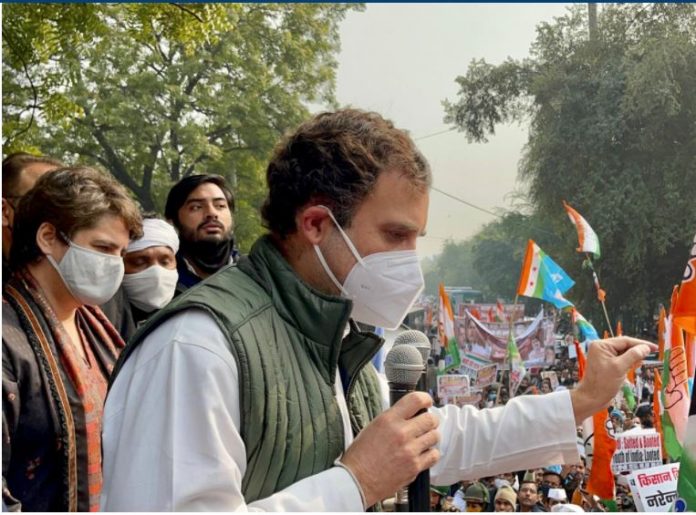 Congress leader Rahul Gandhi and Priyanka Gandhi Vadra on Friday protested outside Delhi Lieutenant Governor Anil Baijal’s residence in solidarity with the protesting farmers who have been camped at Delhi borders from the last 50 days against the centre’s farm laws.

On Friday, the Congress Party is observing Kisan Adhikar Divas, planned to gheraod all Raj Bhavans in the states. The protest outside Raj Niwas by Congress is part of its Speak Up For Kisan Adhikar campaign.

Leading the protest, Gandhi said PM Modi doesn’t respect farmers and wants to tire out those protesting against Centre’s farm laws. He said the BJP will have to withdraw the farm laws. The Congress will not relent till these laws are repealed. These laws are not to help farmers, but to finish them, Gandhi said.

Gnadhi alleged that the Narendra Modi government earlier tried to take away the land of farmers, when it brought the land acquisition Act and the Congress party stopped them at that time. Now the BJP and their two-three friends are once again attacking the farmers and have brought these three farm laws.

Supporting protesting farmers, Gandhi tweeted that the ‘annadata’ of the country are doing Satyagraha against their arrogant Modi government for their rights. He said the entire India is raising its voice against the atrocities on farmers and rising prices of petrol and diesel. Earlier on January 9, a virtual meeting of Congress leaders decided to go aggressive against the Centre and will hit the ground over the farm laws.

After inconclusive eight rounds of talk between the protesting farmers and the Central government, the ninth round of talks between farm union representatives and three BJP cabinet ministers Narendra Singh Tomar, Piyush Goyal and Som Parkash at Vigyan Bhawan.

Thousands of farmers from Punjab, Haryana and western Uttar Pradesh, are protesting at various entry points of Delhi for the last 50 days against the three farm laws. On Thursday, Tomar had said that the government’s ninth round of negotiations with protesting farmer unions would take place as scheduled and the Centre was hopeful of positive discussions.

Modi government is ready to discuss farm laws clause by clause with the farmers to break the over-a-month-long deadlock on the three farm laws while farmer leaders stuck to their demand of repealing farm laws.