Rahul had proposed to Disha from inside the house on her birthday and she reciprocated and accepted the proposal when she entered the house on Valentine's Day. 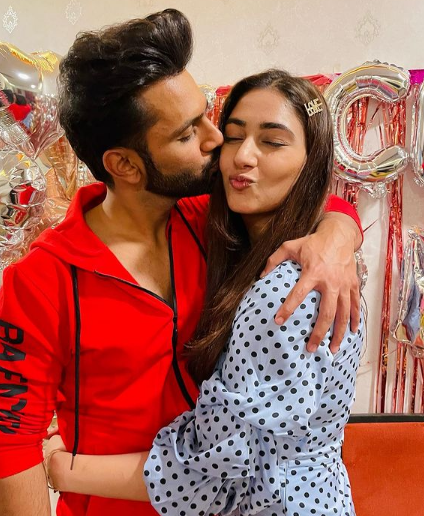 Bigg Boss 14 first runner-up Rahul Vaidya and his lady love Disha Parmar continue to set couple goals even after the conclusion of the show. While Parmar always stood by Vaidya whenever his tactics came under question, Rahul, too did not shy away from confessing his love for the TV actor inside the house. As a souvenir, the singer got a sipper from Bigg Boss house with Disha’s name written on it along with a heart emoji.

An excited Disha took to social media to share the glimpse of the beautiful gift.

Rahul Vaidya, who has come out of the Bigg boss house after more than 140 days joined the pawri trend by sharing the video form his party. In the video, Parmar looked gorgeous in a white and blue polka dress. He shared another picture with Parmar in which he was seen giving a peck on her cheek.

Rahul had proposed to Disha from inside the house on her birthday and she reciprocated and accepted the proposal when she entered the house on Valentine’s Day.

The couple even kissed each other through the glass wall in an emotional moment for Vaidya. Parmar told Vaidya that there could have not been a better day for her to enter the house. She had earlier refused to be on the show as Vaidya’s connection saying it will put more pressure on the singer and she did not want that to happen.

Earlier, Rahul’s mother had entered the show and said they had already begun preparations for his wedding and were waiting for him to come out of the Bigg Boss house. Rahul’s sister Shruti Vaidya is also very fond of Disha Parmar. In an interview with an online entertainment portal, she had said Parmar fits well into their family considering she comes from the same industry. She added they all were chilled out people who gave each other their space.