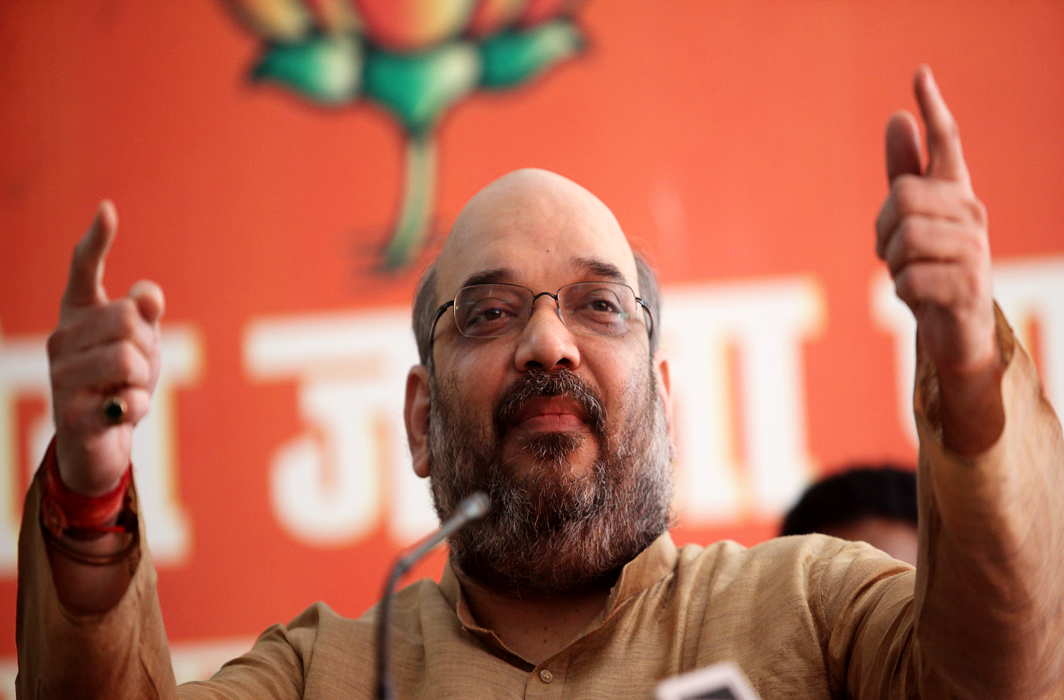 As Congress vice president Rahul Gandhi – who might soon be elevated to lead his party as its chief – launched a scathing attack at Prime Minister Narendra Modi from his home state of Gujarat, BJP national president Amit Shah, on Tuesday, sought to reciprocate the diatribe from the Nehru-Gandhi scion’s pocket borough of Amethi.

Shah, who also hails from Gujarat which is scheduled to go for assembly polls later this year, was in Amethi along with Union information and broadcasting minister Smriti Irani and Uttar Pradesh chief minister Yogi Adityanath on Tuesday. The visit is being seen as the BJP’s effort to make political inroads in the constituency that has been a bastion of the Congress’ first family for decades. Irani had contested and lost the Lok Sabha elections from Amethi and has, ever since, been trying to woo the electorate in the constituency from which she is expected to be fielded again in 2019.

Expectedly, both Shah and Irani narrowed their attack to target Rahul and assert that while he was talking about the lack of jobs and resultant growing unemployment, slowing economy and stalled development in Gujarat, he had neglected his own constituency of Amethi.

Addressing a public meeting at Samrat Cycle Factory compound in Gauriganj area of Amethi, Amit Shah attacked Rahul for questioning the Narendra Modi government on its record of the last three years. “It is a sheer mockery that Rahul, whose party has ruled the country for 60 years is now soliciting Modi government’s three year report card,” Shah said.

The BJP national president, who currently finds himself in the centre of a controversy over the meteoric rise in his son, Jay Shah’s wealth ever since the Modi government was elected in 2014, reiterated his ‘Italian glasses’ jibe at the Nehru-Gandhi scion, who earlier in the day had mocked at the manner in which the junior Shah’s company had made an over 16000 times profit in just two years when compared to its turnover of previous years.

“Rahul Gandhi’s optical glasses are made in Italy and as such he cannot see the development taking place in India…the biggest achievement of the current NDA government is that we have given a PM who speaks,” Shah said. The ‘PM who speaks’ reference was also a veiled attack at Dr Manmohan Singh, who the BJP continues to chide for not speaking out during his term as prime minister on crucial matters like alleged instances of corruption in his government.

Shah made a clear pitch for the BJP, telling the people in Amethi that “you won’t regret if you give BJP and Narendra Modi a chance.”

The BJP president also claimed that Rahul’s attack against the BJP in Gujarat would be given a fitting reply by the state’s electorate. “The people of Gujarat, not BJP, will offer the report card of the state’s development under the party rule. In Gujarat, every household has power and water, while all tehsils have public health centres,” Shah said.

Taking a swipe at Gandhi, Shah said Rahul had never visited Amethi collector’s office even after representing the constituency multiple times, while Smriti Irani had been visiting the place even after losing the last poll.

Former Congress MLA from Gauriganj & 60-70 pradhans have joined BJP, their contention was absence of any development: Smriti Irani in Amethi pic.twitter.com/LUzFuyMuzD

Aware that she might be facing Rahul at the hustings again in 2019, Smriti Irani made a concerted attack against the Congress vice president for his alleged failure in ushering in development in Amethi. Irani accused Gandhi of paying lip service to development. She said the Congress leader was making fun of development in Gujarat but had no answer for the lack of it in his own backyard in Amethi.

“This state was once ruled by the Congress and the Gandhi clan has been representing Amethi for long. Now is the time for them to answer to the people why there has been no development,” she said.

Irani accused Gandhi of failing the people of Amethi and cheating the farmers by grabbing their land through the Rajiv Gandhi Foundation.

“A vast stretch of land was given by farmers long back for construction of the Samrat cycle factory. When nothing much happened, there is an effort to occupy the land illegally and despite eviction notice they are not letting the land go.”