In a recent development on Monday, an unnamed Chinese soldier held last week in Ladakh was handed back to China. 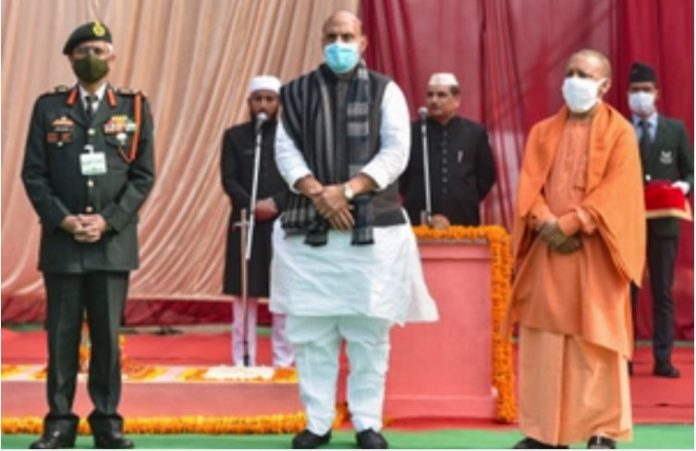 Defence Minister Rajnath Singh addressing public event in Lucknow on Saturday said the Army’s charismatic performance during the prolonged border stand-off with China has boosted the morale of the country and also enabled the citizens to hold their heads high. His statement drew thunderous applause from the crowd. Indian Army Chief General M.M. Naravane and Uttar Pradesh Chief Minister Yogi Adityanath were also present in the event.

Earlier this week the Indian Army chief warned China that India’s desire for peace and tranquility should not be interpreted as a sign of weakness. He had said that while there had been no reduction in troops by either side, all issues would address on the basis of mutual and equal security.

On Thursday Rajnath Singh reiterated India’s resolve to stand firm and defend its territory. Although he did not refer to China, Singh cautioned any superpower against challenging India. He had said India does not want war and in favour of protecting everyone’s security but if any superpower wants to hurt our pride then our soldiers are capable of giving them a befitting reply.

In a recent development on Monday, an unnamed Chinese soldier held last week in Ladakh was handed back to China. In October, another PLA soldier was caught by Indian forces in eastern Ladakh’s Demchok sector.

India and China have been locked in a stand-off at the Line of Actual Control, the de-facto border between the countries since May last year. Tensions peaked in June when 20 Indian soldiers were killed in the line of duty in a clash with the Chinese at Galwan Valley. There have been several rounds of military and diplomatic talks between the two sides to resolve the stand-off but the tensions are still high between India and China.