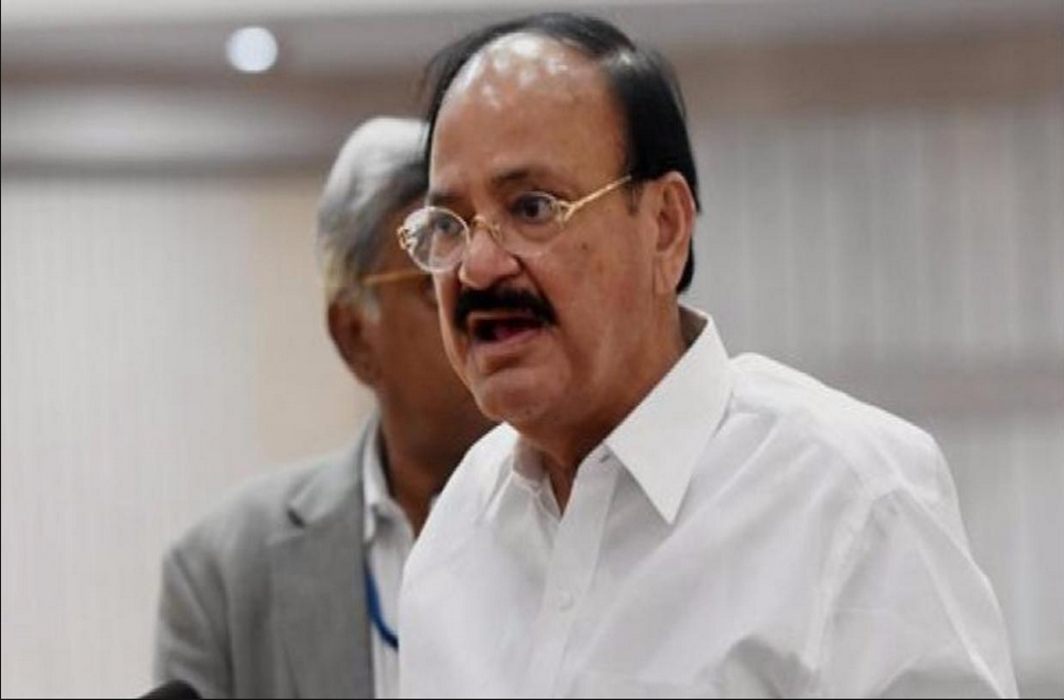 The order came before the Supreme Court began its proceedings on Monday.

Naidu, addressing the charges mentioned against the CJI in the notice in his 10-page order, said that the Opposition MPs were unsure of their own case and the move was based on “suspicion and conjectures.”

“The Hon’ble Members of Parliament who have presented the petition are unsure of their own case. Page 1 of the petition uses phrases such as ‘the facts and circumstances of the Prasad Education Trust show prima facie evidence suggesting that the Chief Justice of India ‘may have been’ involved in a case of illegal gratification…”

The motion further stated with regard to the CJI that “he too was likely to fall under the scope of investigation.”

“It further states that ‘the Chief Justice of India appears to have ante-dated an administrative order.’ I am mentioning this fact because the phrases used by the Hon’ble Members of Parliament themselves indicate a mere suspicion, a conjecture or an assumption,” Naidu’s order said.

“The same certainly does not constitute proof ‘beyond reasonable doubt’, which is required to make out a case of ‘proved misbehaviour’ under Article 124 of the Constitution. Conversation between third party with dubious credentials, which have been extensively relied upon, cannot themselves constitute any material evidence against the older of the office of Chief Justice of India,” the order further stated.

Naidu cited a Supreme Court order to reiterate that the CJI, as Master of Roster, was entitled to allocate cases as he deemed fit and referred it as an internal matter of the judiciary.

The decision was announced on the very first day of the week before before the Supreme Court started its proceedings and, according to a report in The Hindu, Rajya Sabha sources said the Chairman took a quick decision to avoid an “uncomfortable” situation for the occupant of one of the highest constitutional authority, the Chief Justice of India.

“The Chairman didn’t want the matter to linger on as it involved the prestige and dignity of the CJI’s office. He cut short his tour and came back to Delhi on Sunday to take a quick decision,” said a Rajya Sabha official, reported The Hindu.

On Sunday, Naidu had also spoken to former Secretary General of the Lok Sabha Subhash Kashyap, former Law Secretary PK Malhotra and former Legislative secretary of the Rajya Sabha Sanjay Singh, apart from senior officials of the Rajya Sabha Secretariat. Naidu continued with the deliberations till late in the evening and also spoke to K Parasaran, who was the attorney general during the Congress governments led by Indira Gandhi and Rajiv Gandhi and was also a member to the Upper House nominated by the party.

While rejecting the notice, Naidu cited a press conference the Congress held on the issue as being in breach of parliamentary customs and conventions and also in violation of Rajya Sabha norms.

“I am constrained to observe that in the matter, the well established parliamentary customs and conventions have been delineated and the paragraph 2.2 of the handbook of the Rajya Sabha members have been disregarded. This provision prohibits publicity of any notice submitted by a member till it is been admitted by the chairman and circulated to the members. In the instant case immediately after submitting the notice to me on 20th April, 2018, members addressed a press conference and shared the statements contained in the notice which included some still unsubstantiated charges against the CJI. This act of members discussing the act of the CJI in the press is against propriety and parliamentary decorum as it denigrates the institution of the CJI. I am also aware that there has been a spate of statements in the press that seem to vitiate the atmosphere. I thought, I should, therefore, expedite my decision and end needless speculation,” said Naidu.

Eminent jurist and former attorney general of India Soli Sorabjee welcomed Naidu’s decision to reject the impeachment notice against CJI Dipak Misra, saying he has “rightly applied his mind”. Sorabjee said the vice president has found no merit in the notice given by opposition parties led by the Congress for impeachment and has consulted legal experts before arriving at the decision.

“The vice president has applied his mind. He has consulted legal experts and has come to a decision. We did not want the matter hanging indefinitely. He (Naidu) has gone into the matter and has found no merit in it and no ground for impeachment, therefore, he rejected it,” Sorabjee told a TV channel.

When asked about the procedure ahead if the opposition moves the apex court to challenge Naidu’s decision, Sorabjee said he did not see the petition succeeding.

“I don’t see chances of the writ petition (challenging the VP’s decision) succeeding,” he said.

Congress leader PL Punia said immediately after the news of Naidu’s rejection that it and other opposition parties will talk to some legal experts and take the next step. Congress leaders said over the weekend that the party is considering moving the Supreme Court if the notice to remove is rejected.

It was also argued that The Rajya Sabha Chairman could not reject the notice if it met the requirements of 50 signatures. It was only the inquiry committee of three judges, required to be set up under the procedure, that could decide if the charges were made out or had any merit.

On Sunday, Rajya Sabha MP Vivek Tankha who also heads the Congress legal cell, said, “In our opinion, the Chairman performs an administrative or a quasi administrative act where he had to check whether the motion is in order, whether it has valid signatures by the required number of MPs and whether what is written in the petition are reasonable to be framed as charges.”

Asked what would the Congress do, if the Rajya Sabha Chairman rejects their notice, Congress MP and senior advocate Kapil Sibal on Friday said, “We will let you know then. There are many provisions in the Constitution.”

Sources had confirmed to The Hindu that challenging the Chairman’s order is an option available to the party. And since the Chairman’s order pertains to the CJI, if challenged in the top court, it is likely to be heard by judges who are next in line in terms of seniority and experience.

Led by the Congress, opposition parties – CPI, the CPI(M), the NCP, the SP, the BSP and the IUML – had met Naidu on Friday and handed over a notice for impeachment of the CJI.

1.”Conspiracy to pay illegal gratification” in the Prasad Education Trust case and the denial of permission to proceed against a retired high court judge in the same matter. 2. The CJI allegedly listed the petition against the Prasad Education Trust before himself, even when he was heading the Constitution bench, which is against the convention. 3. “Antedating” (backdating) of an order for listing of a petition related to the investigation against the Prasad Education Trust in the Supreme Court. 4. Misra allegedly acquired a piece of land by giving a “false affidavit” while he was an advocate. The plot was surrendered in 2012 when he was elevated to the Supreme Court, even though orders cancelling the allotment were given in 1985. 5. Abuse of exercise of power by the Chief Justice in choosing to send sensitive matters to particular benches by misusing his authority as Master of the Roster with the likely intent to influence the outcome.

The Congress is also trying to build up “moral pressure” on the Chief Justice of India in the hope that he would step aside from judicial duty if a removal motion was moved against him.

Judges who faced impeachment had earlier stepped aside from judicial work and the Chief Justice should do the same, a party leader said.

“It is only a convention, though there is no legal or constitutional bar (on this),” the leader said.

Several jurists and constitution experts had called the impeachment move a sad day for Indian judiciary.

Senior jurist Fali Nariman told The Indian Express (IE) it was ‘a horribly black day in the history of the Supreme Court’, adding that the move not only diminishes the public’s faith in the judiciary, but could well open the door for the ruling party to move against a judge if it doesn’t like a particular judgment. He mentioned the Ram Janmabhoomi case being heard in the Supreme Court as an instance.

Former CJI K G Balakrishnan pointed out that charges of misbehaviour were not enough to seek removal of a judge, but it has to be “proved misbehaviour”.

Justice R M Lodha, who retired as CJI in September 2014 termed it a ‘sad day” and hoped that “such a situation never comes again”.

A section of the Congress senior leadership had expressed disagreement with the move. Two former law ministers – Salman Khurshid and Ashwani Kumar – questioned the move and the motive behind the notice. Khurshid said he was not consulted by the party.

Ashwani Kumar said the move will be counter-productive arguing that “the remedy cannot be worse than the malaise.”

Former Prime Minister Manmohan Singh did not sign the motion. When asked why, Kapil Sibal said, “We did not want to involve Dr Singh, he being a former PM.”

Finance Minister Arun Jaitley termed the move as a ‘revenge petition’. He said in a Facebook post: “It is a revenge petition after the falsehood of the Congress Party has been established in the Justice Loya death case.”

“It is an attempt to intimidate a Judge and send a message to other Judges, that if you don’t agree with us, fifty MPs are enough for a revenge action,” he said.