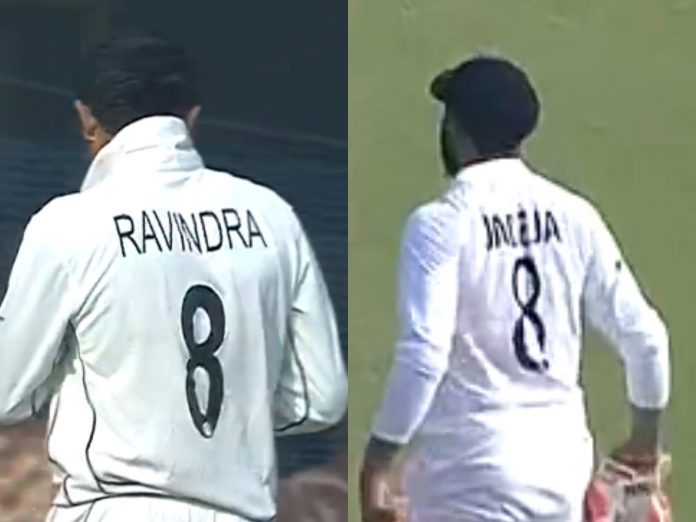 In the ongoing India vs New Zealand Test match at Kanpur, a very rare incident happened on the cricket pitch, when India’s star allrounder Ravindra Jadeja was batting and New Zealand’s Rachin Ravindra was bowling against him. Interestingly, this battle became Ravindra vs Ravindra.

After tea-break in the 58th over of the match New Zealand’s left-arm spinner Rachin Ravindra came to ball against Ravindra Jadeja when Kiwi captain Kane Williamson gave the ball to Rachin to break the growing partnership between Jadeja and debutant Shreyas Iyer.

Rachin bowled a couple of more overs in that spell when Jadeja was facing the ball, however, the bowler failed to get the wicket of Jadeja and got smashed by Iyer for consecutive boundaries.

That was not all, as the mother of the coincidence rarely someone noticed was that both the Ravindras were wearing the same no. of jersey for their respective teams. Both Ravindra Jadeja and Rachin Ravindra wear the no. 8 jersey and both bowls with their left arm.

After this incident tweeple shared their opinions on Twitter and said they have seen everything now.

Here are some of the best tweets on Ravindra vs Ravindra:

Rachin Ravindra is a 22-year old allrounder from New Zealand, who has been named after India’s great’s Sachin Tendulkar and Rahul Dravid.