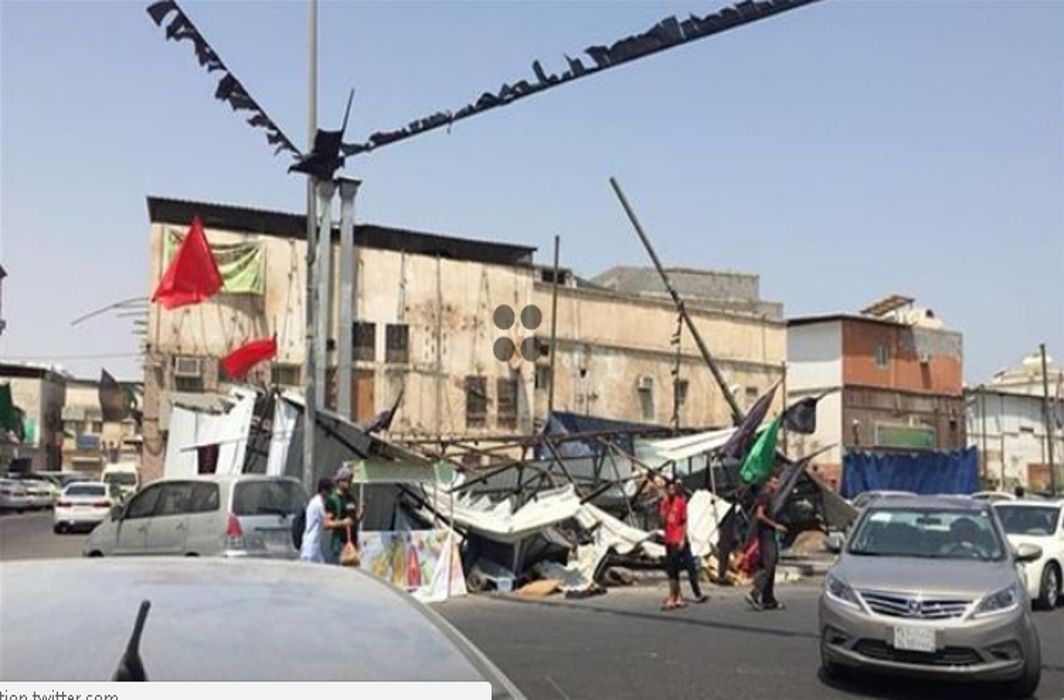 Amidst ongoing rivalry with Iran, Saudi Arabia’s security forces continued its anti-Shia campaign in Kingdom’s eastern province of Qatif by attacking tents especially erected for having mourning rituals during the lunar Islamic calendar month of Muharram.

In the Middle Eastern countries, Tuesday was the first day of Muharram while the martyrdom day of Imam Hussein, the 10th of Muharram will be commemorated on Thursday next. However, Indian Muslims declared Wednesday as first of Muharram because of late appearance of the moon in the sub-continent.

According to the reports coming out of Saudi Arabia through social media along with the pictures of the vandalized tents indicate that the regime’s troops have attacked tents set up in the kingdom’s Shia-populated Qatif region in preparation for the mourning rituals.

Activists have reported through social media that at least 20 tents have so far been attacked and vandalized by Saudi forces since Tuesday.  The forces have also been removing Shia signs under the pretext of ridding the region of what they call “visual pollution.” Social media users shared photos of the aftermath of the Saudi raids.

A group of activists announced about the ongoing attacks through Arabic language tweets.

Shias wear black clothes and mount special flags on their buildings in respect of the martyrdom anniversary of Prophet Muhammed’s grandson Imam Hussein, his family members and companions.

Imam Hussein and his 72 companions were martyred in the Battle of Karbala by the army of the tyrant of the time, the Umayyad caliph, Yazid I, in 680 AD.

Qatif, situated in Saudi Arabia’s Eastern Province, has witnessed anti-regime protests since 2011, with demonstrators demanding free speech, release of political prisoners, and an end to economic and religious discrimination. They allege that Shias are not given equal opportunities and were being discriminated in all spheres of life.

Since 2011, when Arab spring occurred in several countries in the region leading to change of guard in Egypt, Tunisia and Libya and rise of opposition in Bahrain and Yemen, Riyadh has suppressed pro-democracy rallies.  But the discrimination was intensified after January 2016 when Saudi Arabia executed respected Shia cleric Ayatollah Sheikh Nimr al-Nimr.