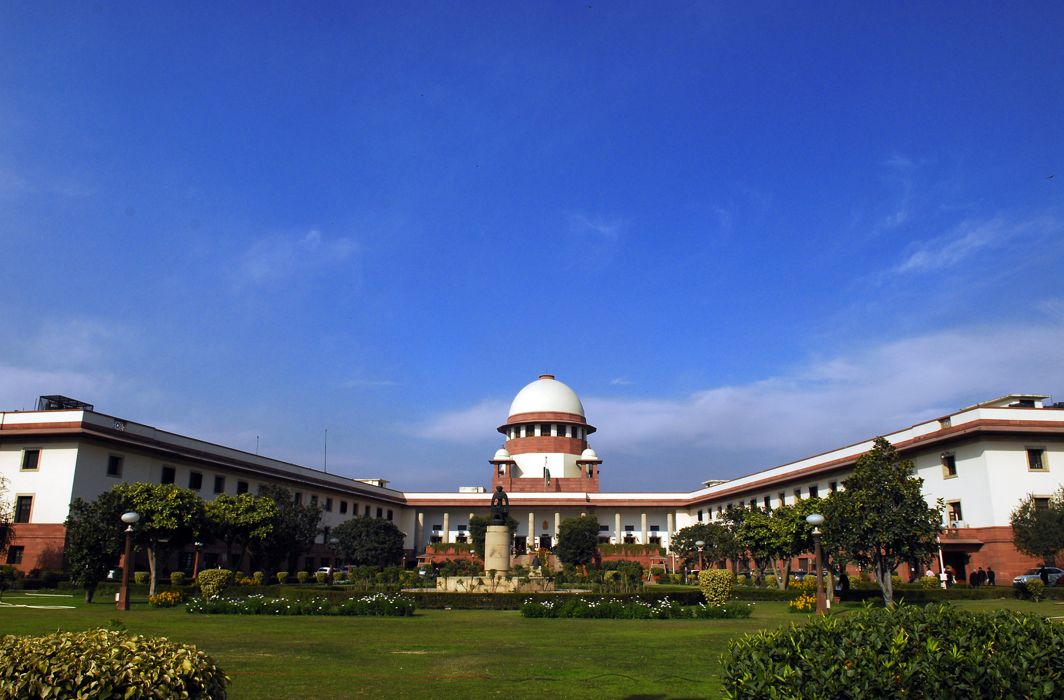 A three-judge Supreme Court bench headed by Chief Justice of India (CJI) Dipak Misra today provided interim relief to the five activists arrested by Pune police on Tuesday, August 28, by ordering they be kept under house arrest till the next date of hearing on September 6.

The court also issued notices to the Centre and Mahrashtra government, seeking their replies.

The apex court observed that those arrested are prominent rights activists, professors and lawyers.

Justice Chandrachud, who was part of the bench, said that dissent is the safety valve of democracy

Hearing over the arrests were also held in the Delhi High Court and a sessions court in Pune. The Delhi HC, which had on Tuesday stayed the transit remand of activist Gautam Navlakha, has said that it would examine the legality of the Maharashtra police action. The court also slammed police for failing to produce the translated version of the FIR and said it was yet to hear the grounds of arrest.

Hearing that the SC has stayed the transit remand of activist arrested yesterday and ordered house arrest till Sep 6, Delhi HC refrained from passing any order on Gautam Navlakha’s plea and stopped dictation of order and put it for tomorrow.

Varavara Rao, Arun Fereira and Vernon Gonsalves, on the other hand, were produced by Pune police at the sessions court there.

Varavara Rao, lawyer Sudha Bharadwaj, Arun Fereira, Gautam Navlakha and Vernon Gonsalves were arrested, the police have said, for their involvement in organising Elgaar Parishad earlier this year in Pune. Elgaar Parishad is an event to mark the 200th year of the Battle of Koregaon, which Dalit groups observe as a victory over the forces of the upper caste Peshwas. The raids were carried out in Delhi, Faridabad, Goa, Mumbai, Ranchi and Hyderabad.

The police contend the activists are linked to Maoists and were planning to recruit members from 35 colleges and launch attacks.

Earlier today, the petition by Thapar and others was mentioned for urgent hearing before a five-judge Constitution bench headed by Chief Justice Dipak Misra. Besides Thapar, the other four petitioners are Prabhat Patnaik, Devaki Jain, Satish Deshpandey and Maja Daruwala.

Senior advocate Abhishek Manu Singhvi, appearing for the petitioners told the bench that extraordinary circumstances have cropped up due to the Maharashtra Police action of arresting several human rights activists.

The petition to the top court sought the release of all the activists arrested during raids in connection with the Bhima-Koregaon case. The petitioners say the arrests were meant to muzzle dissent. “Are these arrests a demonstration to show that the democratic rights of the Indian citizen have been annulled?” petitioner Romila Thapar said in a statement.

The activists have been charged under the controversial Unlawful Activities Prevention Act, which authorises raids and arrest without warrant if a person is suspected to “support terrorist acts or unlawful activities”.

The accused cannot apply for bail and the police have 180 days to file a chargesheet, instead of 90.

Congress president Rahul Gandhi said, “There is only place for one NGO in India and it’s called the RSS. Shut down all other NGOs. Jail all activists and shoot those that complain. Welcome to the new India.”

Union minister Kiren Rijiju, trying to portray that as defence of Maoists and painting the Dalit activists and intellectuals as naxalites, said: “As Prime Minister Dr Manmohan Singh had declared that Maoists are No.1 threat to India’s internal security. Now the Congress president openly supports the front organisations and sympathisers of the Maoists. Keep national security above politics.”

Reacting to NHRC’s notice to Maharashtra over arrest of five activists, Maharashtra minister Deepak Kesarkar has said that the arrests were not politically motivated. He also said that they would give an ‘apt’ reply to the NHRC. “This is a fight for the country. Naxalism a major threat to country’s security,” Kesarkar said.

Ajai Sahni, executive director of Institute for Conflict Management, and an expert on security issues, said: “The entire police action on the Bhima Koregaon violence is misconceived, and the case itself, including the so-called seized correspondence with Maoist leaders, appears concocted.”

He added, “There is a strong constituency in the ruling dispensation that feels that it is necessary to intimidate Left-leaning activists who are thought to be ‘sympathetic’ to the Maoists. The fabrication of the entire idea of an escalating ‘urban Maoist’ movement is part of this campaign.”

About the police case, he said, “None of these cases are expected or intended to stand under judicial scrutiny, but the judicial process itself is the intended end in these cases. This is a process of ‘punishment by trial’. Irrespective of the outcome, the torment of a protracted judicial process will silence these activists, and many others who will get the intended ‘message’. When the police cases eventually fail, as usual, no one will be held accountable.”

Further, in an indictment of government approach, he said, “This is an extension of a model long used in Chhattisgarh against a range of alleged sympathisers. The eventual consequences can only be counterproductive. It is crucial that the ideological middle ground should be preserved. A polarised society can never find its way to peace. Where clear evidence of criminal collusion or of other criminal activities is available, of course, action must be taken. But, as I said before, that does not appear to be the case or intention here.”

Arundhati Roy hit out, saying, “The simultaneous state-wide arrests are a dangerous sign of a government that fears it is losing its mandate and is falling into panic. That  lawyers, poets, writers, Dalit rights activists and intellectuals are being arrested on ludicrous charges while those who make up lynch mobs and threaten and murder people in broad daylight roam free, tells us very clearly where India is headed. Murderers are being honoured and protected.” Roy added: “Anybody who speaks up for justice or against Hindu majoritarianism is being made into a criminal. What is happening is absolutely perilous. In the run up to elections, this is an attempted coup against the Indian Constitution and all the freedoms that we cherish.”

“They should raid those who make up lynch mobs and murder people in broad daylight. It tells us very clearly where India is headed,” she said.

Historian Ramachandra Guha blamed it on the “corporate cronies of the ruling government,” who, he said, were bent on grabbing tribal land, forest and mineral resources.

Guha said that this was a completely autocratic behaviour of the government and this needs to be condemned. He called the actions “chilling.”

He said: “As a biographer of Gandhi, I have no doubt that if the Mahatma was alive today, he would don his lawyer’s robes and defend Sudha Bharadwaj in court; that is assuming the Modi Sarkar hadn’t yet detained and arrested him too.”

CPM general secretary Sitaram Yechury was quoted as saying: “This is a brazen attack on democratic rights and liberties.” The BJP government, he said, is “desperately trying to protect the culprits of Koregaon-Bhima violence by harassing civil and human rights activists”. He said the arrests were meant to shield the real culprits involved in the violence. “Ever since the Bhima-Koregaon violence on December 31, the Maharashtra police, along with central agencies have been targeting Dalit rights activists and lawyers who are taking up the case.”

Journalist Shekhar Gupta said: “‏Arrests of Left activists/intellectuals is McCarthyism taken to another level. Playbook: use commando-comic channels to malign those you want to ‘fix’ with zero evidence, then arrest them on nothing charges but draconian laws. Courts will be tested for their wisdom & spine.”

A columnist Mihir Sharma said, “‏For decades, Dalits have celebrated #BhimaKoregaon without being attacked by Hindutva-vadis. This year, that changed. Now, instead of arresting instigators of violence like Bhide, the BJP has ordered cops to go after Dalit activists, their lawyers and members of the PUCL. Brazen.”

A write-up on BBC was a scathing comment on state of affairs:

“Although many of its ancient texts encourage inquiry, doubt and challenge, India has a chequered history of dissent.

“Successive governments have often easily caved in to demands from fringe groups: India was the first to ban Salman Rushdie’s 1988 novel, The Satanic Verses, which many Muslims regard as blasphemous. International publishers have been forced to recall and destroy books written by scholars following pressure from little-known right-wing Hindu groups. One of the country’s best-known artists, MF Husain, was hounded out of the country after he was accused of obscenity by hardline Hindu groups.

“Antiquated colonial laws remain on the books and continue to undermine free speech. For decades, governments have used a colonial-era sedition law against students, journalists, intellectuals, social activists, and those critical of the government. The Indian state, which often appears to be feeble or unwilling to impose the rule of law, can be selectively harsh on dissenters.

“What is different this time, many say, is a concerted campaign by the government to target dissenters.

“Mr Modi himself and his party have been accused of using dog-whistle politics – coded, divisive messages – to whip up religious tension and stoke sectarian politics. In a culture of what many believe is a growing politics of hate, “whataboutery” and finger pointing, people critical of Mr Modi’s government and party have often been branded as “urban Maoists”, or anti-national, much like US President Donald Trump continues to label reporters “enemies of the people”.

“The upshot is a rising lynch-mob mentality that has begun to pervade many aspects of life.

“On bloodthirsty prime time shows on government-friendly news channels, all propriety and decorum is thrown to the winds as selected guests are targeted and shouted down by anchors and guests who support them.

“Since Mr Modi stormed to power in 2014, vigilante cow protection groups have lynched more than 20 people, the majority of them Muslims, for transporting beef. In homes and streets, people speak of what many say is an imagined threat to the future of Hinduism – it’s a strangely majoritarian nationalism based on past glory and present victimhood. Large parts of the mainstream media, heavily dependant on government advertising in a sluggish economy, prefer to remain silent.

“All this has corroded Indian democracy. Many believe the quiescence of the middle class, the silence of the media, the failure of the political parties to support dissent and now a growing muscular nationalism is to blame for the state of affairs.

“”The silencing of dissent, and the generating of fear in the minds of people violate the demands of personal liberty, but it also make it very much harder to have a dialogue-based society,” Amartya Sen, the Nobel Prize-winning economist, remarked at a lecture last year.

“Indians have not turned intolerant, he said. In fact, “we have been too tolerant even of intolerance”. India, clearly, needs more dissent, not less.”