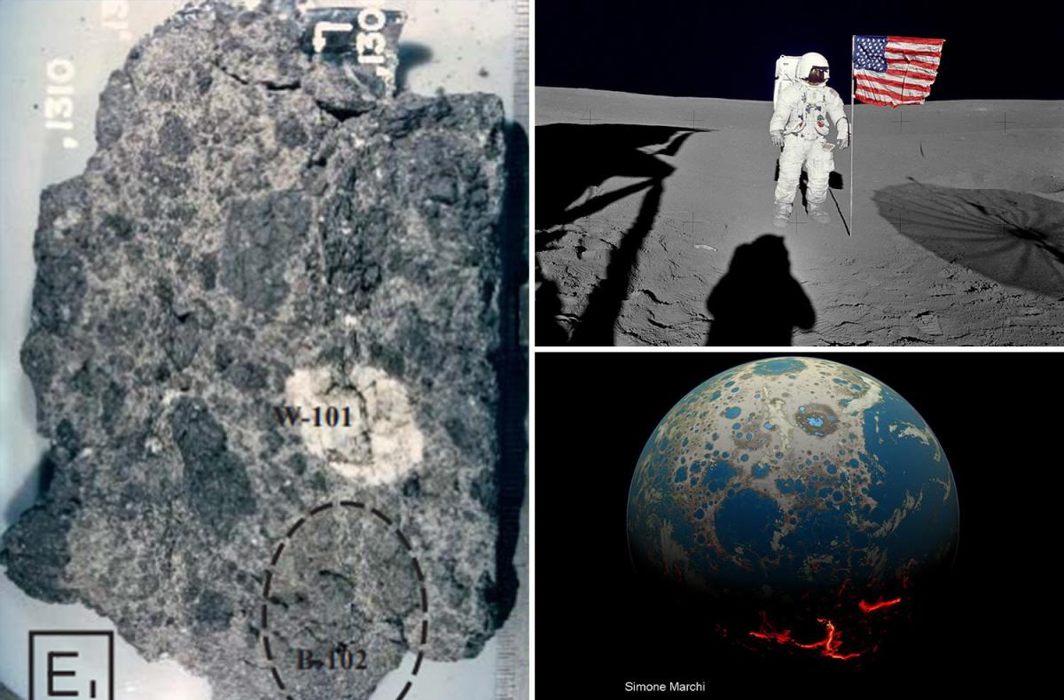 Scientists say they have discovered what may be the Earth’s oldest rock in a lunar sample returned from the Moon by the Apollo 14 astronauts.

An international team associated with Center for Lunar Science and Exploration (CLSE) in the US found evidence that the rock was launched from Earth by a large impacting asteroid or comet.

This impact jettisoned material through Earth’s primitive atmosphere, into space, where it collided with the surface of the Moon — which was three times closer to Earth than it is now — about four billion years ago, researchers said.

The rock was subsequently mixed with other lunar surface materials into one sample, according to the study published in the journal Earth and Planetary Science Letters.

The team developed techniques for locating impactor fragments in the lunar regolith, which prompted CLSE Principal Investigator David A Kring to challenge them to locate a piece of Earth on the Moon.

The researchers found a two-gramme fragment of rock composed of quartz, feldspar, and zircon, all commonly found on Earth and highly unusual on the Moon.

Chemical analysis of the rock fragment shows it crystallised in a terrestrial-like oxidised system, at terrestrial temperatures, rather than in the reducing and higher temperature conditions characteristic of the Moon.

“It is an extraordinary find that helps paint a better picture of early Earth and the bombardment that modified our planet during the dawn of life,” said Kring, a Universities Space Research Association (USRA) scientist at the Lunar and Planetary Institute (LPI).

It is possible that the sample is not of terrestrial origin, but instead crystallised on the Moon, however, that would require conditions never before inferred from lunar samples, researchers said.

It would require the sample to have formed at tremendous depths, in the lunar mantle, where very different rock compositions are anticipated, they said.

The simplest interpretation is that the sample came from Earth, according to researchers.

The rock crystallised about 20 kilometres beneath Earth’s surface 4.0 to 4.1 billion years ago.

It was then excavated by one or more large impact events and launched into lunar space.

Previous work by the team showed that impacting asteroids at that time were producing craters thousands of kilometers in diameter on Earth, sufficiently large to bring material from those depths to the surface, researchers said.

Once the sample reached the lunar surface, it was affected by several other impact events, one of which partially melted it 3.9 billion years ago, and which probably buried it beneath the surface.

The sample is, therefore, a relic of an intense period of bombardment that shaped the solar system during the first billion years.

After that period, the Moon was affected by smaller and less frequent impact events.