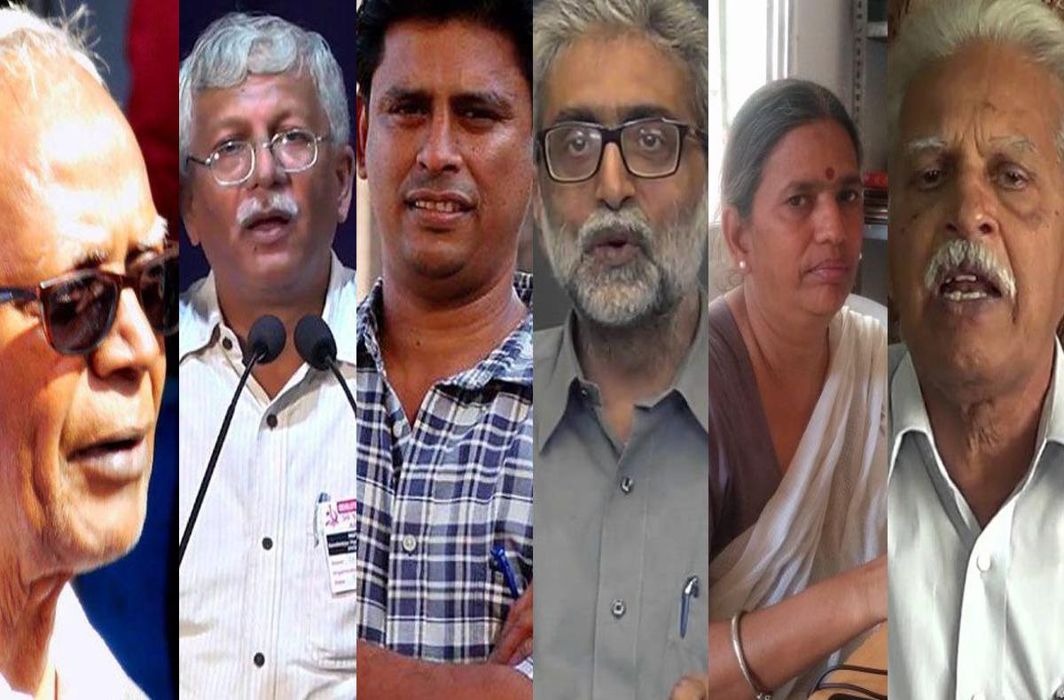 The Supreme Court, on Monday, September 17, extended till September 19 the interim house arrest of five civil rights activists arrested by the Maharashtra police on August 28 in nationwide raids in connection with Bhima Koregaon communal clashes.

The activists – Sudha Bharadwaj, Gautam Navlakha, Arun Ferreira, Vernon Gonsalves and Varavara Rao – have been under house arrest since August 29.

On the next date, September 19, the prosecution – the Maharashtra police and the Centre – are likely to present their case diary against the accused and “additional evidence” of the connections between the activists and Maoist organizations.

The court’s interim order placing the activists under house arrest has come on a petition filed by five eminent citizens – Romila Thapar, Maja Daruwala, Devaki Jain, Prabhat Pattnaik and Satish Deshpande – who had challenged the arrests. Families of some of the arrested activists had later filed affidavits in the case.

The top court bench of Chief Justice Dipak Misra and Justices AM Khanwilkar and DY Chandrachud, which is hearing the petition, made it clear at the outset that the interim house arrest orders will continue till Wednesday.

Chief Justice Misra, however, pointed it out to the counsel for the petitioners and the prosecution that the bench was, at the moment, was entertaining the petition “on the foundations of liberty” and would assess the “issues like independent enquiry… at a later stage.”

Senior advocate Singhvi has demanded that the apex court must order a probe by a special investigation team (SIT) to look into the arrest of the activists and whether there is any truth in the allegations of their involvement in the January 1 Bhima Koregaon communal clashes or those of them being involved with Maoists “in a conspiracy against the State or to assassinate Prime Minister Narendra Modi”.

A SC bench observed that the court “must go through the evidence” to arrive at a conclusion whether there is actually substance in the criminal cases against the activists or that the case is fabricated.

The court further remarked that it may even order a SIT probe to look into the manner and the circumstances leading to registration of FIRs and subsequent arrests of the activists.

“We may quash the case if there is no material. We will have to examine the materials first. Let them (Maharashtra police) submit a report before us. We will safeguard the liberty but we will also have to see what is the material against them,” the judges said.

On Monday, the counsel for the prosecution once again questioned the locus standi of the petitioners in the case, with Additional Solicitor Generals (ASG) Tushar Mehta and Maninder Singh arguing that the Supreme Court should not have entertained the petition to begin with and that pleas by the arrested activists were already sub judice at the lower and high court level.

While senior advocate Rajeev Dhavan was arguing on behalf of the petitioners, Mehta, along with ASG Maninder Singh maintained that “strangers (referring to the petitioners) have no locus in criminal matters.”

Senior advocates Abhishek Manu Singhvi and Rajeev Dhavan, appearing for the petitioners, however, strongly rebutted the submissions by the prosecution. Singhvi and Mehta demanded that the cases filed by the activists in the lower and high courts must be entertained while the extant petition in the Supreme Court should be set aside. However, the suggestion attracted a strong rebuke from Dhavan who snapped at Mehta while pointedly telling the bench: “Let us have a hearing without interruptions. Mehta should be doing cricket commentary… don’t try to convert everything into a stupid drama.”

Mehta retorted saying he did not want to “stoop to his (Dhavan’s) level” and continued to submit that “many incriminating documents against the arrested social activists have been recovered during the investigation”. He claimed that the activists have “not only been arrested for their involvement in the Bhima Koregaon event but also for conspiring to disrupt peace in the country.”

The five activists – Arun Ferreira, Vernon Gonsalves, Gautam Navlakha, Varavara Rao and Sudha Bharadwaj – were arrested on August 28 in connection with the Bhima Koregaon case. The following day, the Supreme Court ordered that they be placed under house arrest till September 6. “Dissent is the safety valve of democracy, if you don’t allow safety valve, pressure cooker will burst,” the court had said.

On September 6, the court extended their house arrest till September 12 and adjourned the matter. The bench of Chief Justice Dipak Misra and Justices AM Khanwilkar and DY Chandrachud, however, had pulled up the police for briefing the media even when the case was still in court.

During the September 12 hearing, the court adjourned the matter to Monday, September 17 and extended the house arrest of the activists. Both sides had asked for more time to file additional documents. On Monday, the house arrest was extended till Wednesday, when the prosecution has provide evidence for the case under which the arrests were made.