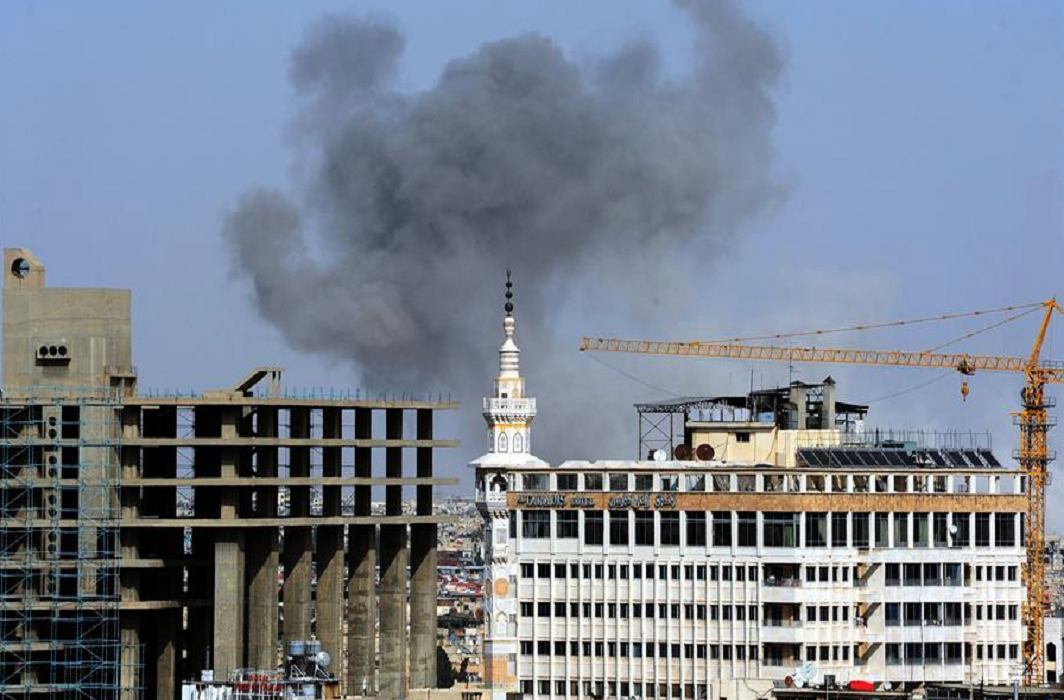 Amidst calls of stopping bloodshed by Syrian forces in Eastern Ghouta, Syrian aircraft continued dropping leaflets on Friday for encouraging the civilians to leave and armed militants to lay down their weapons.

Xinhua reports from Damascus that the footage released by the Syrian army shows its aircraft dropping leaflets displaying small maps showing safe exits out of Eastern Ghouta with instructions to the civilians on how to leave and urging the armed militants to lay down weapons to gain a presidential pardon for those who turn themselves in.

One leaflet read: “Everyone holding this paper is considered to have dropped arms against the Syrian military and can benefit from the amnesty issued by the president of the Arab Republic of Syria. All army checkpoints must guarantee the safety and protection of all this paper’s holders and provide them with food, medicine and shelter in accordance with the laws of the Syrian Arab Republic.”

The leaflets were dropped on the besieged inhabitants at a time when Russian sponsored five-hour a day pause continued for the fourth day without achieving the intended goal of civilians’ evacuation.

Syrian state media claims that rebels were preventing civilians to leave instead they were suing them as human shield. However, the Syrian Arab Red Crescent said it evacuated two Pakistani civilians, a man and his wife on Wednesday.

On Friday, two children succeeded in leaving the besieged area after midnight through the designated humanitarian corridor in Wafidin area, reports Russian Reconciliation Center in Syria.  Syrian soldiers monitored their movement as the rebels fired at them while they were leaving.

On February 24, the UNSC adopted a resolution asking all parties to immediately cease clashes and provide a sustained humanitarian break for at least 30 days across the country. However, Syria and Russia announced

Meanwhile, London-based Syrian Observatory for Human Rights said no civilians were killed on Friday by the shelling in Damascus. The people in the capital still prefer to stay indoors, particularly in the eastern Damascus’ close to the Eastern Ghouta.

Meanwhile, official Syrian Arab News Agency (SANA) reports that the government has been alert to emerging information that rebels may stage a chemical attack against the army in Ghouta.

An army official told Thursday,”Terrorist groups in Eastern Ghouta have received orders to use chemical weapons in the region to frame the Syrian army.”

The UN organizations have already sounded an alarm about the situation in Eastern Ghouta, where 400,000 people are believed to be trapped in the sprawling area.

A couple of months ago, al-Qaida-linked groups launched an offensive against a military base in the city of Harasta in Eastern Ghouta, triggering a counter-military offensive in the area.

Latest report from Damascus, says that on Sunday, the five hour pause began at 9 a.m. for allowing civilians, besieged by Jabhat al-Nusra and other terrorist groups affiliated to it to leave the area.

SANA reporter at al-Wafideen camp said that ambulances and public transport buses are waiting near the safe corridor. Temporary housing shelters are set up in al-Duwair in Damascus countryside.

Meanwhile there are reports of 64 shells fired by terrorist organisations on the residential neighbourhood in Damascus and surrounding areas.