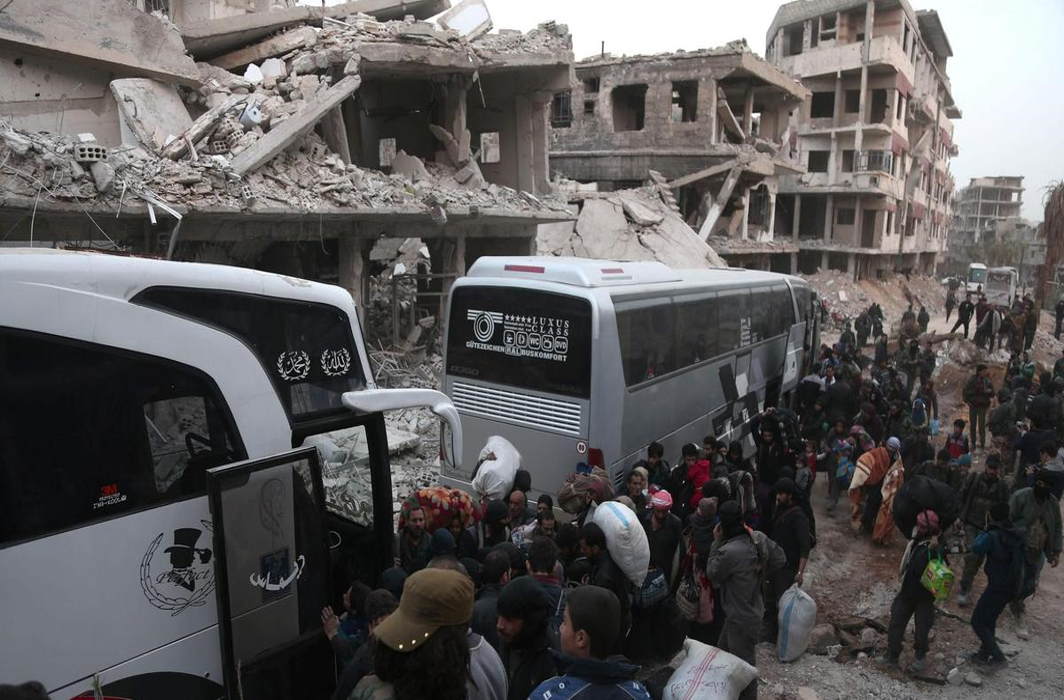 46 buses with 959 terrorists and their family members leave Quneitra

In a continued and sustainable move to eliminate terrorism in the country, Syrian government forces under the guidance of Russian forces have been engaged in uprooting and transporting terrorists from south-western city Quneitra and its surroundings.

Monday was the third consecutive day, when hundreds of terrorists who reject the settlement were evacuated from the city and its countryside along with their families towards sent to Idlib, the north-western city closer to Turkish border.

According to SANA, the official news agency, Syria, while implementing the agreement which stipulates for evacuating all the villages and towns of the province from the armed manifestation and for the return of the state institutions to it, 46 buses with 959 terrorists on board and tens of their family members headed for northern parts of the country. The reporter counted the buses and received statistics from the authorities at Jaba corridor in Quneitra countryside.

The agreement facilitated by Russians stipulates for the return of the Syrian army to the positions in which they used to be before 2011. It also stipulates for the exit of terrorists who reject the settlement to Idlib and settling the legal status of those who are willing to stay.

The SANA reporter says that all the buses got out of the village of Um Batina through Jaba corridor after gathering the terrorists and their families from all the villages and towns of Quneitra countryside.

The reporter said that the process of evacuating terrorists will continue till ending the existence of terrorists in the province completely as the fourth batch of terrorists is expected to be evacuated on Monday.

The status of militants who are willing to stay will be settled and all the state institution will return, the reporter added.

Read More: More than 100 killed in conflict with Daesh (IS) in Syria, Iraq

The Syrian official news agency has also reported that “the terrorist organizations burned the corridor assigned for transporting the weapons and equipment which were provided to them by the Israeli enemy in addition to burning many positions and documents.”

Syria is currently controlled by various forces: besides government army, opposition groups, democratic forces, Daesh (IS) and Tahrir al-Sham. The unrest began in March 2011. As on May 2018, government controlled 60.2 percent of total territory, Syrian Democratic Federation held 26.7 percent while  3 percent was held by Daesh (IS).