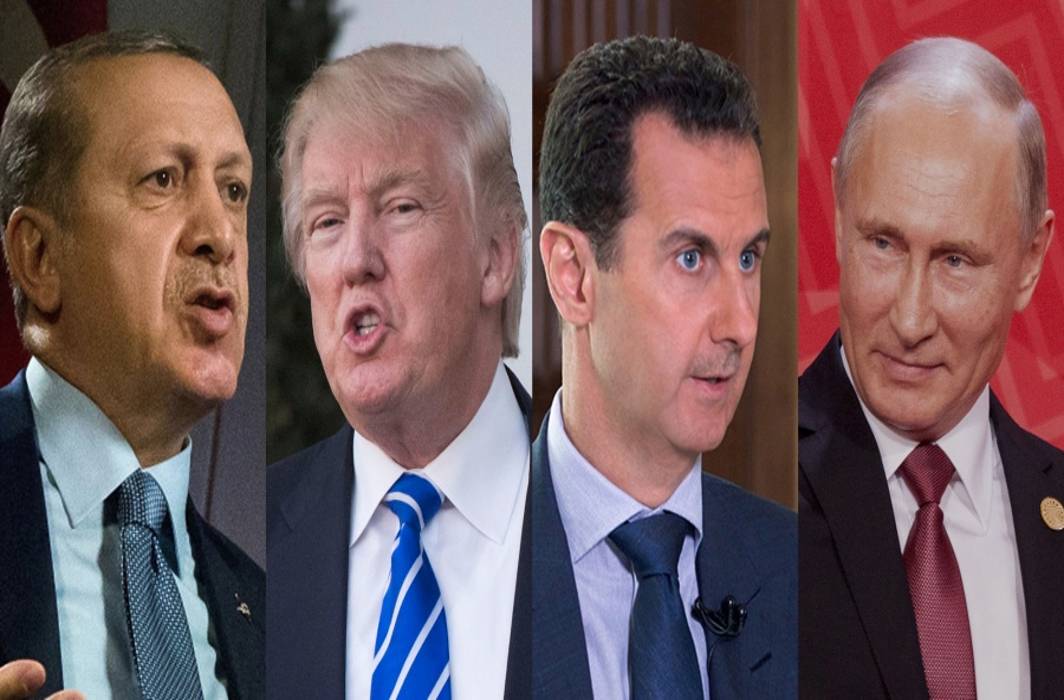 The Damascus regime headed by President Bahsar al-Assad is being sandwiched by US and Turkey, the allies turned hostile in the complex situation. More than 400 deaths are reported from two different sectors: Afrin in north-west and Al-Shafah in the east, close to Iraqi border.

US Secretary of State Rex Tillerson has recently announced Washington’s intention of maintaining forces in Syria. US forces were neither invited by legitimate Damascus government nor  enjoy UN consent for any operations in that country.

US administration has been claiming of fighting against Daesh (IS) and supporting anti-Assad groups including Jubhat-al-Nusra (an Al-Qaeda ally) and separatist Kurdish group YPG.

Syria’s separatist Kurdish YPG is also considered to be a threat for Turkey. Ankara considers they were supporting separatist Kurds known as PKK in Turkey.

According to CNN, US-led coalition killed approximately 150 IS fighters in a Saturday airstrike, Col. Ryan Dillon, spokesman for the coalition told on Tuesday. Target was “IS headquarters and command and control center” and the strike involved “over a week’s worth” of intelligence work and information from US backed Syrian Democratic Forces fighting IS on the ground.

The strike took place in the Syrian town As-Shafah, near Iraqi border, an area where remnants of the IS continue to operate. It was carried out by US Navy F/A-18 and unmanned drone aircraft. The report say that aircraft carrier USS Theodore Roosevelt is currently operating in the Gulf supporting strikes against IS in Syria.

Dillon further said, “It looked like they were massing for a movement. When they do congregate.. like that we want to take advantage of it.”

Meanwhile Maj. Gen. James Jarred, the commander of the US-led  coalition’s Special Operations Joint Task Force in Syria said in a statement, “The strikes underscore our assertion that the fight to liberate Syria is far from over.”

Jarred further said that the coalition forces and members of the Syrian Democratic Forces “are still finding, targeting and killing IS terrorists intent on keeping their extremist hold on the region. We cannot take our focus off our mission, and we must not lose our momentum in taking these terrorists off the battlefield and preventing them from resurfacing somewhere else.”

In late November 2017 Chief of General Staff of Russian Armed Forces Valery Gerasimov had announced that his country was set to reduce its troops in Syria by the end of the year after finishing up the remaining “few” missions there.

Russian jets were conducting air raids against Daesh and other terrorist groups inside Syria at the Damascus government’s request since September 2015. Russian military personnel were operating from the Russian naval facility in the Tartus port and their airbase in Hmeimim.

According to Russian official news agency TASS, President Vladimir Putin, on Tuesday, spoke with his Turkish counterpart to discuss the situation in Syria, including near Afrin. Both leaders stressed the importance of further joint efforts towards crisis settlement based on the “principles of respect to Syria’s national integrity and sovereignty.”

On December 11, Russian President Vladimir Putin made a short visit to Hmeimim airbase and declared mission accomplished for Russian forces in Syria. After meeting Syrian President Bashar al-Assad, Putin told Russian air force, “Friends, the motherland is waiting for you. You are coming back home with victory.”

Meanwhile, Reuters has reported that Turkish military has killed at least 260 Syrian Kurdish fighters and IS militants in its four day old offensive into the Kurdish-dominated Afrin region, considered to be dominated by YPG.

The agency further said that US President Donald Trump and Turkish President Recep Tayyip Erdogan were expected to discuss the latest developments through a phone call on Wednesday.  Trump administration official has said that Ankara had sent “conflicting signals” about the scope of the offensive. He was further quoted saying, “We would urge them to limit incursion as much possible”. Turkish foreign minister has also confirmed that the two leaders will speak on Wednesday.

Meanwhile official Syrian Arab News Agency (SANA) reports that thousands of civilians have fled their houses and villages in Afrin city and the surrounding areas in the northern countryside of Aleppo as the Tukrish troops continue their attacks and “random bombardment of the city”.

Quoting civil sources, the agency said, that Turkish Aggression resulted in the death of dozens and injury of many others and caused huge material damage, not to mention forcing families to leave the area.

UN report said that an estimated 5000 people have been displaced from Afrin city as of Monday.

Meanwhile, Russia Today (RT) reports that Moscow has sent invitations to a number of countries, including US, China, Britain and France,  to attend Syrian National Dialogue Conference to be held in Sochi on January 29-30.

Russian President’s Special Representative for Syria Alexander Lavrientyev, told on Tuesday,  “The invitations were sent by the name of the guarantor states Russia, Iran and Turkey to Jordan, Egypt, Saudi Arabia, Iraq, Lebanon and Kazakhstan.”

On January 22, Syrian President’s advisor Buthaina Shaban, while meeting with a Chinese delegation in Damascus, said that Turkish offensive is part of US plan of establishing an illegal army to vitiate and continue the Syrian crisis.

Earlier, Syrian foreign ministry had condemned Turkish attack in Afrin calling it a violation of its sovereignty.

Interestingly, Ruben Safrastyan,  Director of National Academy’s Institute of Oriental Studies, based in Yerevan, Tuekey, believes that the developments in and around Syria on a phase of diplomatic process were drastically changed with Turkish military aggression. He also blamed US and Russia for a “silent consent” over the recent actions in Afrin.