The film is an investigative comedy in which Pannu will be seen in the role of a feisty cop and Pratik Gandhi will be seen as a chauvinistic brat whose paths cross with Taapsee. 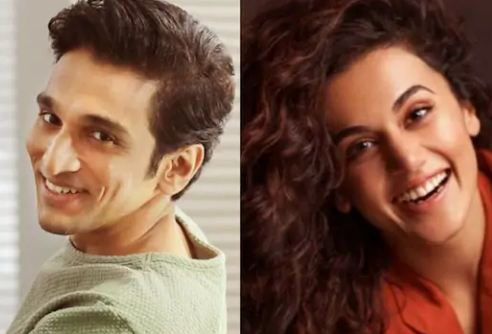 Actor Taapsee Pannu is set to collaborate with Scam 1992 fame Pratik Gandhi in an upcoming film titled Woh Ladki Hai Kahan?. The film, touted to be a comedy drama, will be directed by Arshad Syed and produced by Siddharth Roy Kapur under his production banner Roy Kapur Films.

The official Instagram handle of Roy Kapur Films announced the upcoming film on Instagram. The caption read, Happy to announce our next production, a madcap comedy filled with twists and turns in the search for a missing ladki! #WohLadkiHaiKahaan? starring @taapsee and @pratikgandhiofficial, produced by #SiddharthRoyKapur and written & directed by @arshadasyed. On the floors soon (sic)l.

Sharing the news on Twitter, Gandhi promised a riotous ride. Hitting the road along with @taapsee in search of a missing ladki! Get ready for a riotous ride! #WohLadkiHaiKahaan? produced by #SiddharthRoyKapur, @roykapurfilms and written & directed by @justarshad. on the floors soon!, tweeted Gandhi.

The film is an investigative comedy in which Pannu will be seen in the role of a feisty cop and Pratik Gandhi will be seen as a chauvinistic brat whose paths cross with Taapsee. Talking about the film, Siddharth Roy Kapur said when Arshad narrated the screenplay, he instantly knew he had to produce the film. The production team is excited to be working with Taapsee who brings so much energy and exuberance to the screen, and Pratik who blew all away with his incredible performance in Hansal Mehta’s Scam1992, Kapur added.

The film will mark the directorial debut of writer Arshad Syed. He has worked as a writer in  Student of the Year 2  and several other movies. On his collaboration with Roy Kapur films, Arshad said he is ecstatic about the opportunity. He thanked Sidharth for his faith in his vision for the film, and grateful to have fantastic actors like Taapsee and Pratik bringing the story to life.

For the first time, Taapsee will be teaming up with Pratik Gandhi for a project together. The makers of the film are currently in the process of finalising the rest of the cast.The film will go on floors by the end of the year.