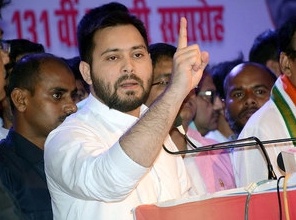 RJD leader Tejashwi Yadav held an election rally in the state’s Nawada district on Friday. Yadav took a dig at Chief Minister Nitish Yadav for his decision of staying indoors and avoiding public interaction for four months during the Covid-19 pandemic and coming out now to ask for votes. In early June, Kumar had stepped out of his home after spending more than 80 days indoors to drive just 20 meters to the official secretariat.

Yadav did not stop here, he hit out at the Bihar CM over his handling of the coronavirus pandemic that led to migrant crisis in the state. He said over 32 lakh people returned to Bihar, unemployed. The nationwide lockdown announced by the government in the wake of the pandemic left them jobless. The state promised employment to the people and developed a skill mapping programme but many remain jobless. He said the unemployment rate in the state has reached 46.6 percent.

The RJD leader fired a lot of questions including promised government jobs, eradicating poverty and factory set ups in the state. He said what did Nitish Kumar do in 15 years? Referring to the financial aid to the state during floods and the coronavirus pandemic in the space of a few months, Yadav said he welcomed Modiji in Bihar but where is the Bihar package? Yadav also referred to the double-engine model of development touted by the BJP in which the centre and state has the same party is in power, asking if it had helped in Bihar progress.

Tejashwi Yadav promised 10 lakh government jobs in Bihar ahead of the elections which prompted a series of questions from Nitish Kumar. Earlier this week, referring to Former Chief Minister Lalu Prasad Yadav’s jail sentence over a corruption case, Kumar asked Yadav if he would take money from jail to pay salaries of the new employees.