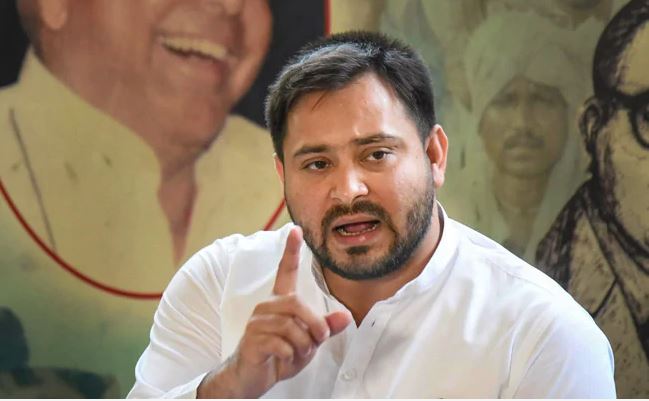 In an ultimatum to Bihar chief minister Nitish Kumar on Wednesday, Rashtriya Janata Dal leader Tejashwi Yadav, who is the face of opposition coalition in the coming assembly elections, has said either arrest and question him for the murder of the Dalit leader Shakti Yadav or order a CBI probe that would wash away opposition’s baseless allegations against him. In a letter to CM Nitish Kumar, Yadav wrote that  Kumar can have him arrested before the filing of nomination and call him for questioning. He described the allegations against him as baseless.

Tejashwi Yadav and Tej Pratap Singh, with four others have been named in a case in connection with the murder of Dalit leader Shakti Malik in the Purnea district of Bihar.

The 37-year-old Dalit leader Shakti Malik was shot dead at his Purnea home on Sunday by three unidentified men. The police report said three men barged into Malik’s home and killed him while he was sleeping. Post Malik’s death, a video surfaced online in which Malik could be seen accusing Tejashwi of demanding Rs 50 lakh in lieu of a ticket from the Raniganj seat and threatening to kill him.

Malik’s wife has alleged that it was a politically-motivated killing. She said her husband was ready to contest individually following his expulsion from RJD as state general secretary of the RJD’s SC cell.The ruling Janata Dal (United) has since then been vocal against Tejashwi, saying Lalu’s son has exposed himself.

However, RJD has alleged that naming Tejashwi and Tej Pratap in the murder case is a political conspiracy being hatched by the ruling party to malign Yadav’s party image ahead of the Assembly polls later this month.

Senior RJD leader Shivanand Tiwari had said naming the leader of the opposition and his elder brother in a murder case in these circumstances is part of a political conspiracy.

Elections will take place in Bihar in three-phase between October 28 and November 7. Results will be declared on November 10.