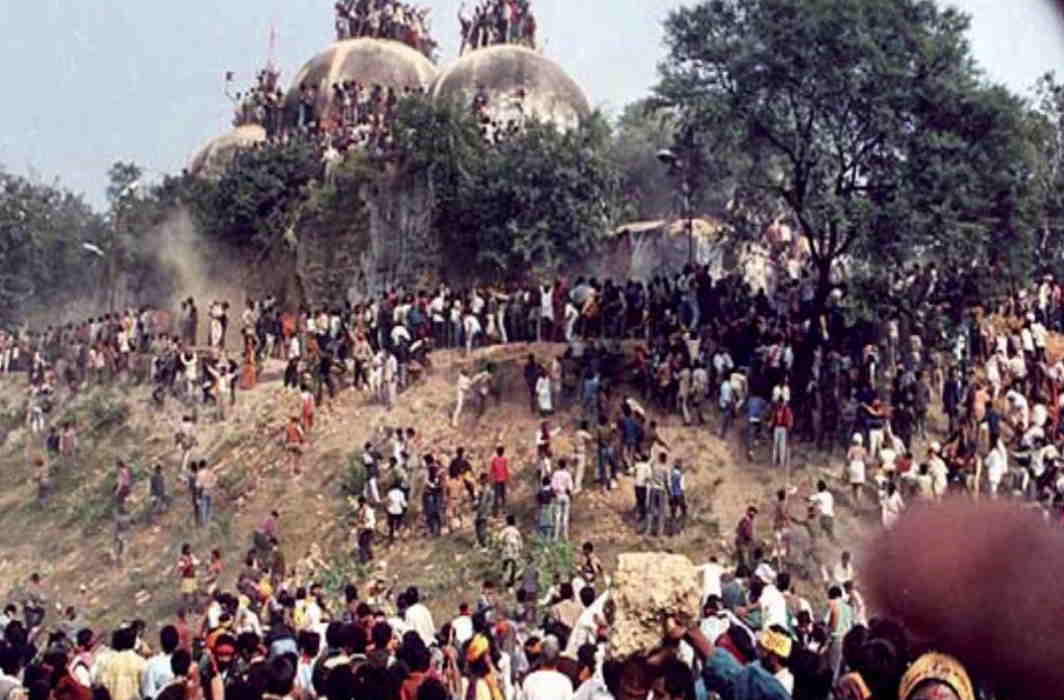 The 25th anniversary of Babari Masjid demolition will rekindle debate: why was it demolished, historical wrongs, Mandal Commission inviting a Mandir backlash, Hindu yearning for a Ram temple and so on. But the clinching evidence Judges of the Supreme Court, steeped in the case, might find interesting is a video recording of celebrations at ground zero, the site of the demolition soon after the traumatic event.

The first scene opens with a number of girls in a circle, clapping in unison and singing a song with the following refrain:

(Now this flag will flutter over Pakistan)

The next scene shows a group of young men, delirious with excitement wearing bandanas around their heads, carrying lances. They lunge towards the camera, shouting:

(Bombs will fall on Pakistan)

Third scene consists of a handsome Swami with wavy hair. In his booming voice he spells out:

The final scene has the late Bal Thackeray predictably announcing in very matter of fact tones, from his Mumbai residence:

“We are going to build the Ram Temple, and if the Muslims don’t like it, they can go to Pakistan.”

There was no mention of Ram or a temple, only a frenetic triumphalism over Pakistan. In the context of the demolition of a mosque which carried the name of the first Moghul Emperor, the celebrations appeared to settle multiple scores against a long chain of Muslim “marauders” and Muslims who mushroomed under their auspices and who eventually walked away with an independent country. Worse, they left behind almost as many of their co religionists in this country.

No one ever disputed the primacy of Ram in the Hindu belief system, but the demolition of the mosque was an instance of faith being placed in the service of politics. L.K. Advani’s 1990 Rath Yatra was designed to neutralize caste divisions aggravated by the Mandal Commission. Its purpose was to compact the Hindu caste pyramid teetering because of excessive exposure to identity Politics. The mosque and by extension, the Muslim, was to be the foil in this primary enterprise. This was the cement that would be filled into the crevices to stabilize the pyramid.

In this masonry for compacting Hindu society, heavy collateral damage would have to be borne by the Muslim. This collateral damage, in other words, was to be no meager side show. The scaling down of a thousand years of civilization associated with the “invaders” would be cathartic, even exhilarating for the majority. By that very token, it would be degrading for the largest minority ever in history.

Pakistan had become a part of the country’s internal politics even before the 1965 war when Prime Minister Lal Bahadur Shastri upturned Nehruvian secularism by seeking RSS volunteers for Civil Defence Duty. Indira Gandhi, Prime Minister after Shastri, felt the heat when she lost the 1967 elections in eight states.

Even during electoral adversity in the north, Indira Gandhi felt reasonably secure so long as her charisma lasted in the southern states of Karnataka and Andhra Pradesh. When these states were lost in 1982, she realized that the Congress rule could not be secured in the north without recourse to a shade of saffron. This shade she brought into play during the 1983 Jammu elections, harnessing Hindu sentiment against the Khalistan movement next door.

The 404 seats in a House of 533 that Rajiv Gandhi won in 1984, after Indira Gandhi’s murder, were interpreted by the Congress as Hindu consolidation against minority communalism. From the Sikh minority to the Muslim minority was an easy conceptual leap.

It was a moment of reckoning for the BJP, smarting with only two seats in 1984. It could not allow the Congress to steal the Hindu platform. Congress too would not give up the advantage. In 1986 it arranged for the locks of the Ram temple to be opened, having earlier pleased the obscurantist Muslims by upturning the Shah Bano judgement which provided maintenance to a divorced woman.

Then Rajiv Gandhi began the 1989 election from Ayodhya with a promise that he would usher in Ram Rajya. He allowed bricks to be laid for the temple’s foundation, exactly where the VHP had planned to.

To win this competition in Hindu radicalism, Advani’s Rath Yatra provided the BJP with an occasion to raise the stakes beyond the Congress reach. While Rajiv stood on a saffron platform, he was careful not to overtly offend the Muslims.

P.V. Narasimha Rao as Prime Minister reversed this ambidextrous approach. He slept while the Kar Sevaks pulled down the mosque. There was no ambiguity now. It was straightforward Hindu-Muslim polarization.

And now as 2019 elections approach, what should the Muslims do? My mother, who died three years ago, had accompanied my wife, daughter and me to Ayodhya to see the 1989 Shilanyas (bricklaying). She lived in Lucknow and we were there only for two days. This way, she thought, she would see more of us and also inform herself about the mosque in the news. After watching the grotesque drama this is what she said:

“A mosque of “fitna” (conflict) is not an auspicious place of worship. In any case, a Muslim can spread his prayer mat anywhere in the direction of Kaaba and say his namaz. A Hindu consecrates his idols in a temple.”

Muslims should, as an act of generosity, gift the disputed mosques in Ayodhya, Kashi and Mathura. “Hindu masses would be ecstatic.” I chose not to argue.

Maulana Kalbe Sadiq of the Personal Law Board, echoes the same sentiment.

“Even if Muslims win the case in the Supreme Court, they should make a gift of the land to the Hindus.” The Supreme Court can be the guarantor that communalism would not claim more monuments.

Masses will be electrified and communalists on all sides will be defeated, he says.