“Train passengers will have to behave responsibly”

Panelists say that it’s important to open rail traffic, but effective measures to rule out virus must be taken. 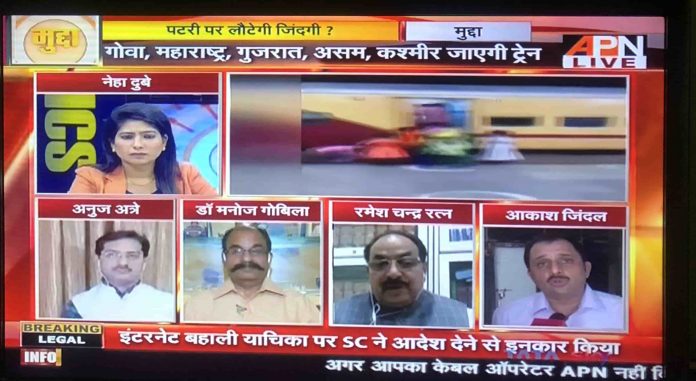 Indian Railways has announced that it would resume 15 premium passenger trains, starting May 12, after 51 days of suspension since March 22. But how will social distancing be followed on the trains? And how much migrants will have to pay to reach their villages on these premium trains? APN’s popular debate Mudda discussed the issue. Anchorperson Neha Dubey spoke with panelists including economist Akash Jindal, Congress’s Anuj Atre, BJP’s Ramesh Chandra Ratan and senior member, IMA, Dr Manoj Gobila.

Jindal said: “This cannot be seen as a financially profitable venture. Bookings will be limited, but the move is relevant from the social angle.”

Atre said: “It was important to restart train services. Labour force that do not have basic provisions to live, need to go back to their villages. But malls are not opening due to centralised ACs, so how are they planning to operate trains with ACs? AC trains should not be allowed.”

Ratan said: “Till now, shramik trains were there for the migrants. Government also has to look at students and other people stranded at various places. Bookings are to be done online, and 15 routes are started. These decisions have been taken after talks with the chief ministers. This virus is here to stay, so thermal screening will be done, and masks will be mandatory. Lockdown was meant to arrest the figures and for the government to make preparations.”

Dr Gobila said: “Thermal screening will help to rule out fever. But with temperatures rising, body temperature may be anyway higher, not related to any virus. So self-disciplining is more important.”Covid

Atre said: “Thermal screening was done even at airports, and still so many people tested positive. The nasal and throat swab test, which is limited in our country, is the correct test. These AC trains are more likely to spread the virus. AC trains will carry greater risk.”

Jindal said: “Every passenger should move ahead responsibly. Those who are suspecting that they might be ill with the Covid-19 virus, should not board the trains.”

Ratan said: “Let’s not do politics over the corona virus. A roadmap is needed to move ahead. Tickets are to be booked online. If people are in doubt, they should not get into the train. After so many days of lockdown, people are anxious and want to get back into their routines. Moreover, this decision has been taken in consultation with doctors, nurses and paramedical staff as well. Compared to other countries, our figures have been much contained. But we have to move forward. Government is taking these decisions after holding wide-ranging talks.”

Atre said: “We are not doing any politics over such a serious issue. But we need to be careful about the health aspect also as we move forward. Government has been expecting migrants to pay for their tickets. It is important to run the trains, but why start AC trains right now? And which medical science tells us that thermal scanning is enough to test the virus?”

Ratan said: “All decisions have been taken by the government after adequate discussions over video conferencing with chief ministers and medical experts.”

Atre said: “No chief minister has said that AC trains need to be started.”