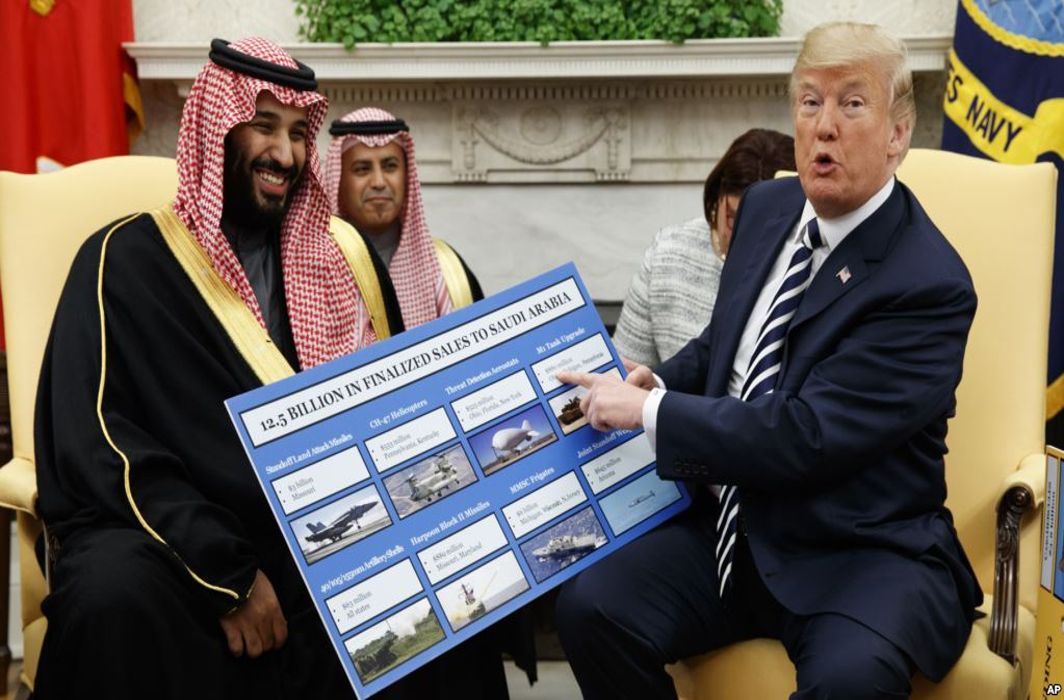 In a remarkable development, US President Donald Trump and Saudi Crown Prince Mohammed Bin Salman have discussed defence deals, security cooperation and investment in US, while a group of senators attempted to force a vote on a bill to curb American support to Saudi-led military intervention in Yemen.

Trump gave a warm welcome at White House to the powerful Crown Prince and credited US defence sales to the Saudis boosting American jobs. Both the leaders praised the strength of US-Saudi ties, which had grown sour during Obama administration because of different perceptions about Iran.

The body language of President Trump was of a successful businessman when he said, “Saudi Arabia is a very wealthy nation, and they’re going to give the United States some of that wealth, hopefully, in the form of jobs, in the form of the purchase of the finest military equipment anywhere in the world.”

Trump held up a printed pictorial chart describing different defence deals. Giving details of the already concluded deals of worth $12.5 billion, Trump pampered MBS saying “This is pea-nut for you”. Prince laughed on the way Trump was describing the defence deals between the two countries.

President Trump further tried to express his personal fondness to the Crown Prince saying, “I thought your father made a very wise decision. And I miss your father – a special man.”  King Salman is scheduled to visit the United States later this year.

While addressing the media persons, Trump said, “[…] the relationship, now, is probably as good as it’s really ever been, and I think will probably only get better. Tremendous investments made in our country. And that means jobs for our workers, jobs for our people,”

Crown Prince, spoke at least ten sentences without break in English language. He reiterated Saudi pledge for $200 billion in investments that would end up at $400 billion when fully implemented. He said a ten year window for implementing the deal was under way. The official translators with the two leaders were looking surprised.

The Crown Prince said, “We are the oldest ally of America from the Middle East with more than 80 years of alliance and big interests – politically, economically, security. The foundation of the relation is really huge and deep.”

Meanwhile Washington Post “Today’s World View” column written by Ishan Tharoor, say that at the time of the meeting between the two leaders “a storm was brewing on Capitol Hill. A bipartisan group of senators attempted to force a vote on a bill that would curb American support to Saudi-led military intervention in Yemen, as well as asserting more broad congressional oversight of American’s wars.”

He further said that after hours of debate, opponents of the legislation narrowly won a vote to table the resolution, effectively killing it for the time being. “Still, it was a sign to the Saudis, who have places all their eggs in the Trump administration’s basket, that not all of Washington is on their side”.

A senior aide to Senator Bernie Sanders, one of the co-sponsors of the bill,  was quoted saying to Today’s WorldView, “The intended message is that Congress is taking its constitutional role much more seriously in matters of war. Allies should understand that U.S. support is not open-ended and that Congress will intervene when there is evidence of rights abuses and war crimes violations.”

In May last year, US President Donald Trump, in his first visit overseas, travelled to Saudi Arabia where Riyadh organised a Muslim states Summit attended by over fifty heads of States. The two countries finalised $110 billion defence deals.

Qatar crisis erupted within days after Trump’s Riyadh visit when Saudi Arabia, UAE, Bahran and Egypt severed their ties with Doha, in early June, alleging it was supporting terrorist groups.

A Senior analyst associated with Aljazeera Marwan Bishara has said that MBS reception in the Oval Room was a “tragicomedy”.  He said, “On the political level, the American president is trying to sell the crown prince to the American public, when Saudi Arabia’s image is really bad.”

“Certainly the crown prince is coming in to pay up at least in part his commitments to the United States in terms of commercial deals and buying arms,” he added.

During his two and a half week sojourn to US, Saudi Crown Prince MBS will also travel to New York, Boston, Seattle, Los Angeles, San Francisco and Houston to cultivate investments.