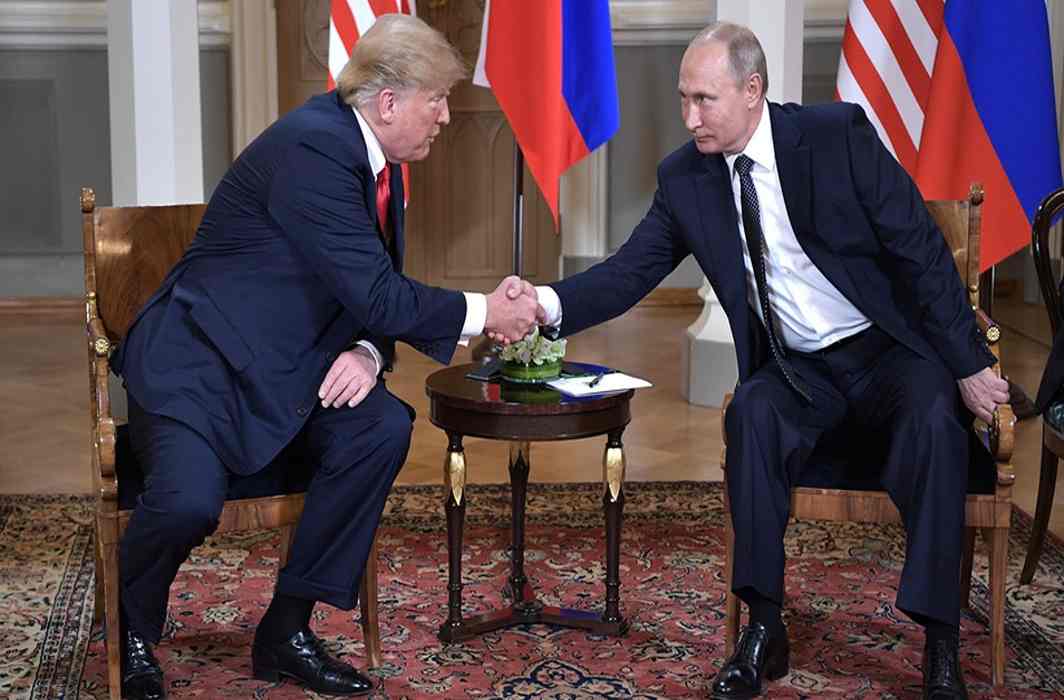 In a major development in the international political arena President of US Donald Trump and his Russian counterpart Vladimir Putin have committed for improving relations between the two major countries, with Putin saying there was no longer any reason for tensions between their countries.

However, media in both the countries indicate that Trump has lost the battle against Russia while US political circle call it a bad performance by their president in Helsinki.

The two leaders met in the Finnish capital Helsinki on Monday to talk about “everything from trade to military to missiles to China”.

“There are no objective reasons for difficulties [between Russia and the US]. The Cold War is a thing of the past, the situation in the world has drastically changed,” said Putin.

Earlier, US President Donald Trump blamed his country’s past “foolishness and stupidity” for the two powers’ hostile relations.

“Our relationship has never been worse than it is now, however that changed as of about four hours ago… To refuse to engage would not accomplish anything.”

Putin said the two countries would need to work together to cope with challenges such as terrorism, international crime, the economy and the environment, while pointing to counterterrorism and cyber security as areas in which they are already doing so.

The two leaders also committed to securing Israel’s border with Syria in accordance with the 1974 Agreement on Disengagement between Israel and Syria.

However, quick scanning of Russian and American media indicates that Trump has won while US has lost during the Helsinki summit.  Russian media has been appreciative of Putin’s moves while US media and political leaders have started criticizing Trump of being “caved” under Putin’s prowess.

The Moscow Times published its lead story “Trump says ‘No reason to believe’ Russia hacked US election” with a hand-shake picture depicting Putin scaring into Trump’s eyes, give lots of score in favour of Putin.

The story intro say, “US President Donald Trump said on Monday he saw no reason to believe Russia had hacked the 2016 US presidential election to help him win, and Vladimir Putin “was extremely strong and powerful in his denial today.”

Moscow Times further reports, “At a rambling news conference after a one-on-one meeting with the Russian president, Trump said not a single critical word about Russia on any of the issues that have brought relations between the Washington and Moscow to a post-Cold War low.”

The Russian daily said, “Asked if he trusted U.S. intelligence agencies which concluded that Russia interfered in the 2016 election, he said he had been told by his CIA chief that it was Russia, but that he saw no reason to believe it.”

However, one of the several tweets Donald Trump posted during transatlantic flight taking him to Washington, his words seemed changed:

As I said today and many times before, “I have GREAT confidence in MY intelligence people.” However, I also recognize that in order to build a brighter future, we cannot exclusively focus on the past – as the world’s two largest nuclear powers, we must get along! #HELSINKI2018

Russian official TASS news agency report says, “Russian President Vladimir Putin has called his summit talks with US President Donald Trump the first move towards “clearing the backlog” of problems in relations between the two countries.

It quoted Putin saying, “Of course, numerous problems persist, and we have failed to clear the backlog in full, it was impossible to do this, but I believe we have made the first important step in that direction.”

Putin said, “The talks with President of the United States Mr. Donald Trump were held in a frank, business-like atmosphere,” he said. “I view them as successful and useful.”

On the other hand CNN reports that after President Donald Trump’s stunning news conference with Russian President Vladimir Putin, members of Congress including some powerful Republicans were quick to rebuke Trump’s performance on the world stage and Trump’s refusal to call Putin out for interfering in the US election.

A productive dialogue is not only good for the United States and good for Russia, but it is good for the world. #HELSINKI2018 pic.twitter.com/Q2Y1PhM9au

House Speaker Paul Ryan, a Republican from Wisconsin, contradicted several comments Trump made during his Helsinki news conference, most notably backing the US intelligence community assessment that Russia meddled with the US 2016 presidential election.

Ryan said, “There is no question that Russia interfered in our election and continues attempts to undermine democracy here and around the world. That is not just the finding of the American intelligence community but also the House Committee on Intelligence.”

He continued, “The president must appreciate that Russia is not our ally. There is no moral equivalence between the United States and Russia, which remains hostile to our most basic values and ideals. The United States must be focused on holding Russia accountable and putting an end to its vile attacks on democracy.”

Former Vice President John McCain, a Republican senator from Arizona, who has consistently criticized the President, said Trump’s comments were “one of the most disgraceful performances by an American president in memory.”

Senate Foreign Relations Chairman Bob Corker said the President “made us look like a pushover” and that Putin was probably eating caviar on the plane home.

“I was very disappointed and saddened with the equivalency that he gave between them (the US intelligence agencies) and what Putin was saying,” said Corker.

Several Republicans in both the houses, even some typically seen as allies of the President, said, in the hours following the Helsinki press conference, that they were concerned over what they heard on Monday.

“I am confident former CIA Director and current Secretary of State Mike Pompeo, DNI Dan Coats, Ambassador Nikki Haley, FBI Director Chris Wray, Attorney General Jeff Sessions and others will be able to communicate to the President it is possible to conclude Russia interfered with our election in 2016 without delegitimizing his electoral success,” Gowdy said in a statement.

Stephen Collinson, a CNN analyst writes, “For as long as history remembers Donald Trump, it will be a day that will live in infamy.” He further said, “The President’s summit with Russian President Vladimir Putin in Helsinki on Monday is already one of the most notorious moments in the tortured relations between Washington and Moscow.”

At one point, Collinson writes, “It was his hubris and desire to be unchained from his staff that led him to meet Putin alone for nearly two hours in Helsinki — fueling rumours that he is under the Russian leader’s spell.”