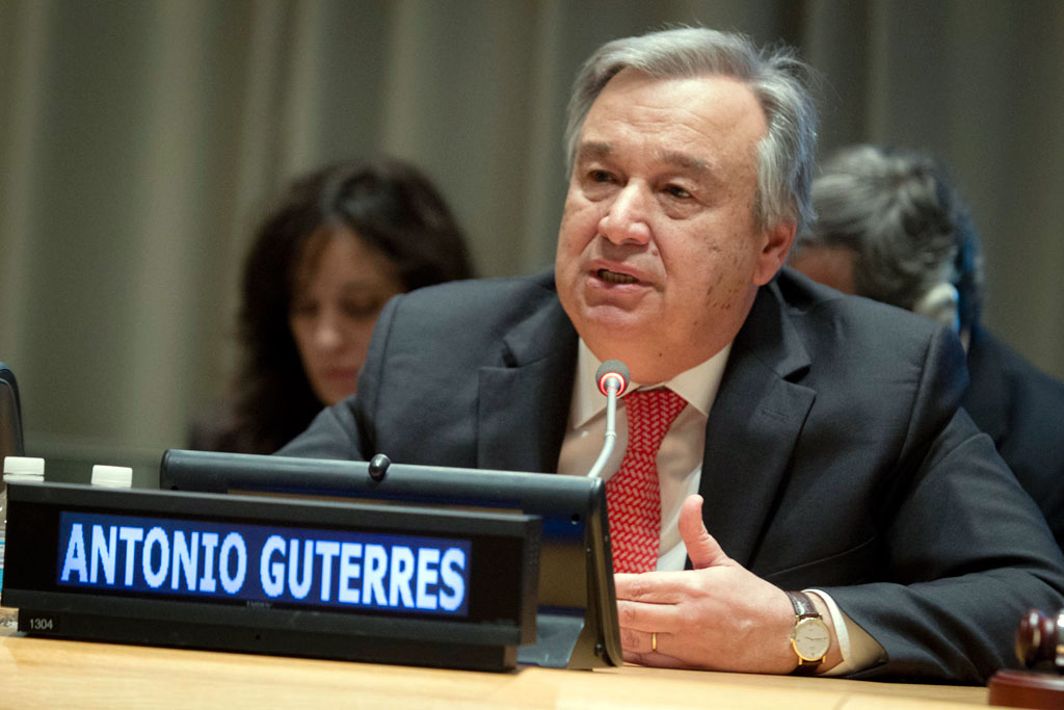 Finally tension seems to be easing with the resumption of dialogue between North and South Korea. UN Secretary General Antonio Guterres has welcomed the progress made in the talks for easing tensions in the peninsula on Tuesday.

According to Stéphane Dujarric, the spokesperson of UN Secretary General, Guterres  has spotlighted, among others, “the agreement to reopen military channels as critical to reducing tensions in the region.”

He said that Secretary General has welcomed “the agreement to work to ease military tensions, hold military-to-military talks, and reopen the inter-Korean military hotline.”

The chief of the world body has also lauded North Korea’s decision to send a delegation to the upcoming Winter Olympics to be held in Pyeongchang, South Korea next month. “The re-establishment and strengthening of such channels is critical to lowering the risk of miscalculation or misunderstanding and to reduce tensions in the region,” the statement said.

The statement further said, “As the United Nations General Assembly has recognized, the holding of the Olympic Games can foster an atmosphere of peace, tolerance and understanding among nations. This is particularly relevant on the Korean Peninsula and beyond.”

The Secretary-General seized the opportunity to acknowledge other efforts that have contributed to reducing tensions. “He hopes such engagement and efforts will contribute to the resumption of sincere dialogue leading to sustainable peace and denuclearization on the Korean Peninsula,” the Spokesman concluded.

UN Secretary General’s statement came on the day when delegates from North and South Korea held their first official talks after two years at Panmunjom, a demilitarized village situated on the border.

On January 4, US President Donald Trump claimed the credit for his pressure tactics against North Korean leader Kim Jong Un.

With all of the failed “experts” weighing in, does anybody really believe that talks and dialogue would be going on between North and South Korea right now if I wasn’t firm, strong and willing to commit our total “might” against the North. Fools, but talks are a good thing!

Meanwhile, James Petras, a Bartle professor emeritus of sociology at Binghamton University, based in New York, has told Iranian network Press TV that the two countries have “sidelined” US President Donald Trump.

“I think the two Koreas have recognized that a Trump-induced war would be totally destructive. Trump is being sidelined now by the South Korean agreement to share the Olympic games,” he added.

Petras has said that Donald Trump’s claim of his pressure working to bring borth sides for the dialogue is “a flat lie.”

“It’s very clear that North Korea and South Korea are entering into a very serious dialog independently of the Trump administration’s threats to bomb and start a nuclear attack,” he said.

He further said, “The US position was creating tensions and hostilities and now the fact that South Koreans have turned their back on Trump, he is trying to take credit for opining up this important dialog.”

However, CNN reports that South Korean President Moon Jae-in has credited his US counterpart Donald Trump for making a “huge” contribution to bringing North and South Korea together for the landmark talks.

While addressing his New Year press conference in Seoul on Wednesday, Moon said that he would be willing to sit down with North Korean leader Kim Jong Un in the future, but wouldn’t have “a meeting for the sake of a meeting,” calling for Pyongyang to move towards denuclearization.

“War must not break out on the Korean Peninsula again. My goal is to resolve the North Korean nuclear problem and solidify peace during my term,” he added.