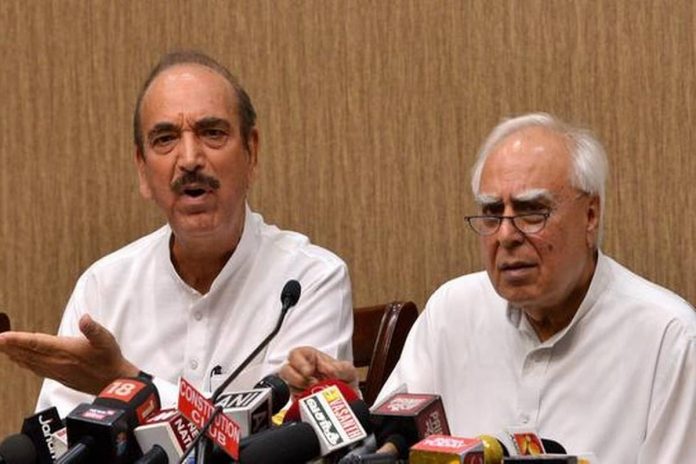 Senior leaders Ghulam Nabi Azad and Kapil Sibbal have once again asked for revamp of Congress party. They said with proper restructuring of party it would not be possible to take on Modi and the BJP in the elections.  “If my party wants to be in opposition for the next 50 years, then there is no need for elections within the party,” Azad said. A party veteran from Sanjay Gandhi days, Azad is the leader of opposition in Rajya Sabha and his term ends in February 2021.

He also led the party successfully in the 2002 Assembly election in Jammu and Kashmir. Azad said that those opposing CWC elections are afraid of losing their positions as they got their posts via ‘appointment cards’. “”An election has the benefit that when you fight elections, at least your party is 51 per cent behind you. Right now, the person who becomes president might not even have one per cent support. If CWC members are elected then they cannot be removed. So what is the problem,” Ghulam Nabi Azad added.

While Sibal, in an interview to a newspaper said, “If people have access to the letter, they will know it is not an attempt to belittle anyone, including the Gandhi family. In fact, we have appreciated the services rendered by the leadership thus far.”

“The Congress party is at a historic low and the election results of 2014 and 2019 reflect that,” Sibal added.

The letter writers were however belittled at the CWC meeting. Though Sonia Gandhi had said she had no ill-will against those who wrote the letter, she has now taken the first steps to keep the so-called dissidents in check. Jairam Ramesh, a senior leader who was not in the dissenting group, has been appointed chief whip of the Congress.

Sonia  also formed a committee in the Rajya Sabha with Congress party’s treasurer and her political advisor Ahmed Patel and another loyalist KC Venugopal to deal with issues that may come up in the Rajya Sabha.

This new committee will effectively side-line and keep under check the Leader of Opposition Ghulam Nabi Azad and Deputy Leader Anand Sharma, sources said. Both the leaders had played a critical role in writing the letter and were instrumental in ensuring not many Rajya Sabha leaders come out in support of Sonia Gandhi.

To show this is not being done exclusively to side-line the dissenters, Sonia Gandhi has appointed a similar committee in the Lok Sabha, with Gaurav Gogoi as the Deputy Leader and Ravneet Singh Bittu as a whip. Both leaders are believed to be close supporters of the Gandhi family.

Sonia Gandhi has also ensured other letter-writers like Manish Tewari and Shashi Tharoor in the Lok Sabha are ignored, sources said. Both Tiwari and Tharoor are excellent orators and have lost out because of being signatories, sources point out.

With this decision, the days of leaders like Ghulam Nabi Azad and Anand Sharma appear to be numbered as the leaders of the Congress party in the Rajya Sabha but top aides say Sonia Gandhi will wait for the monsoon season to end before ordering a change.