After Uttar Pradesh, Haryana to consider law against love jihad 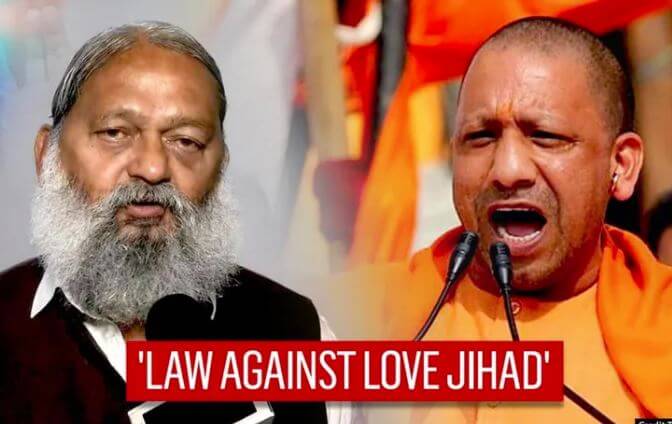 The Home Minister’s remarks come amid outrage in the state over the killing of a 20-year-old student outside her college in Ballabhgarh by a former classmate and his accomplice. On Sunday, locals in Ballabhgarh blocked National Highway 2, demanding justice for the victim. The victim’s family has alleged that the man was forcing her to convert to Islam in order to marry him. Following the incident, Hindu outfits have alleged that the woman’s murder is a case of love jihad. The Haryana government has set up a three-member Special Investigation Team to probe the case. The police have arrested two men – Tausif, the main accused, and Rehan in connection with the case.

On Saturday, the chief minister of Uttar Pradesh Yogi Adityanath had issued a warning to those waging love jihad in the country. Addressing a poll rally in Uttar Pradesh’s Jaunpur and Deoria, Adityanath welcomed the Allahabad High Court order which had declared the religious conversion for the sole purpose of marriage as invalid and unacceptable. The bye-poll for Deoria assembly seat will be held on Tuesday.

Haryana Chief Minister Manohar Lal Khattar has also said that the state is thinking about the legal provisions to curb love jihad in the state following the unfortunate case. Assuring the people of the state, Khatttar said no innocent person will be punished under the law.

Love jihad is a term coined by few Hindutva groups to describe inter-religious marriages. The groups believe that Muslim men force the conversion of Hindu women in order to marry them. Earlier this year, the government told the Lok Sabha that no law proves the existence of love jihad in the country and that the Constitution gave everyone the freedom to practice and propagate any religion.