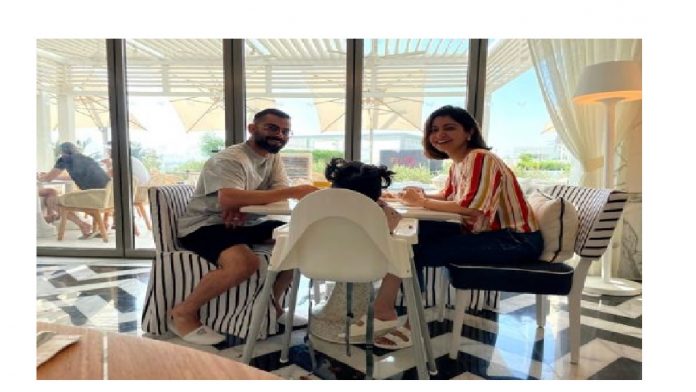 Virat Kohli took time out for his family in between T20 World Cup warm-up matches. Recently, the Indian skipper went for a cute breakfast date with Anushka Sharma and their daughter Vamika. He even took time out to share the picture from his breakfast date on social media.

In the picture, it can be seen that Virat, Anushka, and Vamika were enjoying their breakfast. Virat and Anushka were all smiles for the picture and Vamika’s backside and her cute ponytails can be seen in the photo.

As soon as they shared the picture on social media, several users started saying that Virat and Anushka should now do a face reveal of Vamika as they really want to know, how she looks like.

One of the users wrote that Vamika’s ponytails are prettier than my existence and this family is so cute.

Another user wrote that everyone’s focus is on Virat and Anushka but I’m still hoping for little Cutiepie Vamika to face the camera.

Yet another wrote that Aww… Can’t take off my eyes from them, God bless.

In just hours of sharing the picture, it has so far garnered 127.4k likes, 8.911 retweets, and 605 quote tweets, at the time of writing this article.

The Indian players have been accompanied by their families for the T20 World Cup in the UAE. The players also emphasized that having their loved ones near them has come as big relief as they have been in bio-bubble for more than 2 months.