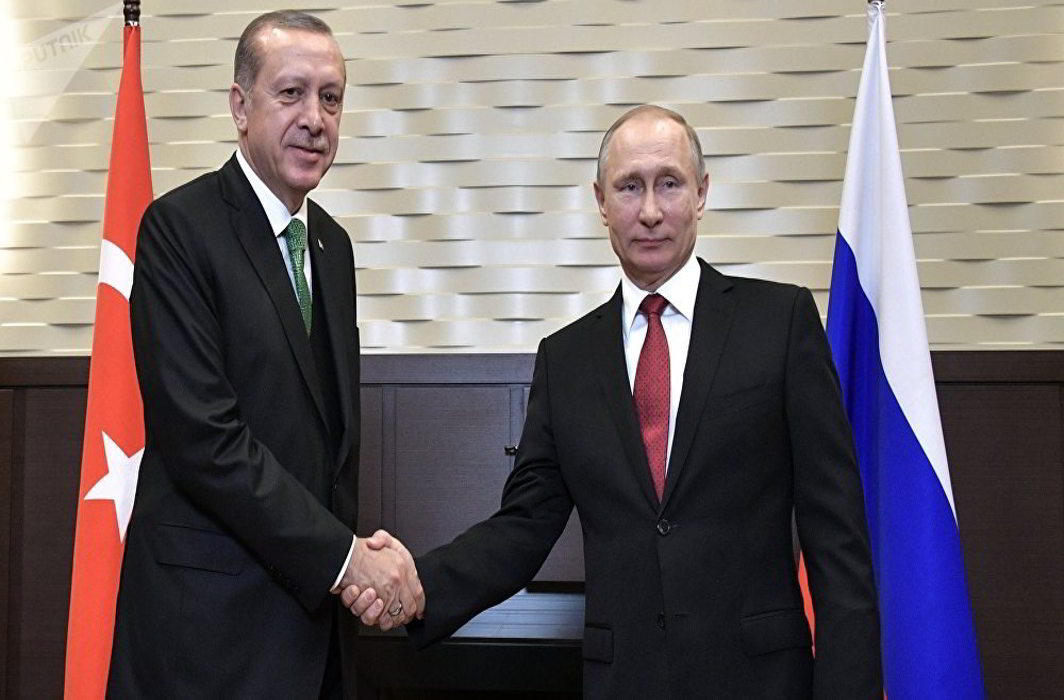 Erdogan describes Putin as “my friend”

In a major breakthrough, Russian President Vladimir Putin has said that ties between Moscow and Ankara may be considered as “fully restored”. He was speaking at a meeting with his Turkish counterpart Recep Tayyip Erdogan in Russia’s Black Sea resort of Sochi on Monday.

According to Russian news agency TASS, while addressing Erdgan, Putin said “As you and I decided during my visit to your country, we will hold a working meeting today. I am grateful to you for accepting the invitation, as indeed, you have just said, the flight here only takes around one hour. In the beginning of our meeting I would like to point out that our relations may be considered as fully restored.”

Ties between the two countries were badly affected after Turkish jets shot down a Russian warplane near Syrian border in November 2015. Later Russian Ambassador to Turkey Andrei Karlov was assassinated in Ankara in December 2016.

Responding to Putin’s gesture, The Turkish leader said that “since the normalization of relations between our countries began, frequent meetings [between leaders] have been giving impetus to bilateral ties.”  He further said, “Our bilateral relations, as well as cooperation in resolving regional issues, provide us with an opportunity to look into the future together.”

Erdogan further said that apart from personal meetings, the two leaders maintain telephonic contact.  He said that political, military, trade and cultural cooperation between the two countries has been increasing with each passing day. The Turkish president informed Putin about his plans to visit Kuwait and Qatar after Sochi.

In the aftermath of Saudi Arabia, UAE, Bahrain and Egypt severing ties with Qatar in early June this year, Turkey has sided with Qatar. Kuwait has been trying for mediation between Qatar and Saudi led quartet, who have been demanding, among others, closing down of Turkish military base in the tiny Arab country.

Aljazeera, reported that before departing for Russia, Erdogan had also suggested Russian and US to pull out their troops from Syria after their leaders said there was “no military solution” to the country’s long running conflict. However,  he described Putin as “my friend”.

During the fight against terror groups in Syria, Iranian military advisors, and Lebanon’s Hezbollah have been fighting on the ground while Russian air force provided them air cover. Over 95% of the occupied territory has been restored from Daesh clutches.

The Turkish President Recep Tayyip Erdogn has successfully realigned his ties with regional countries including Iran, especially over fight against Daesh (IS) in Syria and Iraq. Earlier, Turkey was blamed for facilitating Daesh terrorists to enter Syria and Iraq through its territory.

During the rise of Daesh terrorists in the region Syria, Iraq and Iran were blaming Turkey for aligning with Saudi Arabia, Qatar and Israel in promoting the terror. Injured terrorists were even provided with medical support in Turkey.

Montreal based Global Research Foundation had reproduced a report, on its website, authored by Chicago based Stephen Lendman in November 2015.  The writer claimed, “Erdogan is an international outlaw, He’s supporting ISIS, US proxy foot soldiers in Syria, Iraq and elsewhere, directly involved in their oil smuggling, refining and sales worth hundreds of millions of dollars on the black market.”

The writer had further claimed that “America and other Western nations are well aware of what’s going on, doing nothing to stop it, aiding it by inaction and/or direct support – Russia alone intervening by bombing ISIS’ truck pipeline, transporting oil along with its facilities in Syria.”

Before Putin-Erdogan meeting, Kremlin had said that the two leaders plan to discuss regional and international issues including the “joint fight against terrorism” and efforts to end war in Syria.