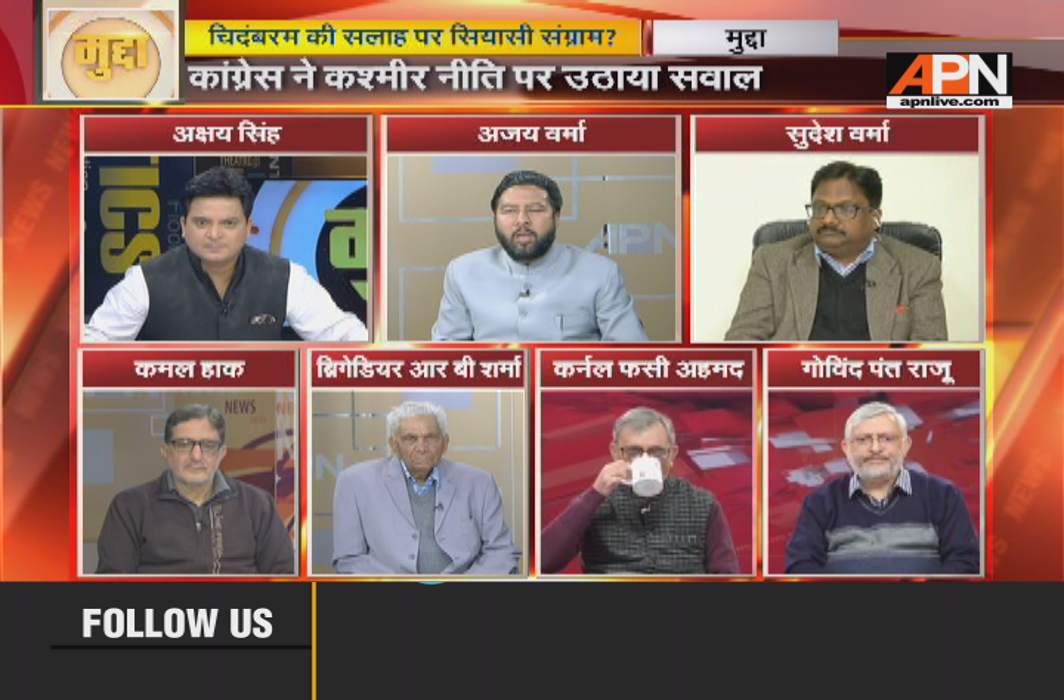 Senior Congress leader and former finance minister P Chidambaram launched a tweet attack on the Modi government, saying its “militaristic” approach had failed to end infiltration and militancy in Jammu and Kashmir. This brought the Kahmir policy on the forefront of news.

Brig Sharma said that on three issues, Modi government has been very much on the track. First, there is a clear directive to the forces; two, he said, that the way civil society has to be dealt in the troubled conditions prevailing in the Valley is very clear; third, there is sufficient international pressure on Pakistan.

Sudesh Verma said that if Pakistan is today being seen as a global terrorist spot, it’s because of the way the Modi government has been able to handle the issue.

Raju said that the Congress should rise above petty politics and not make irresponsible statements.

Ajay Verma asked why the Congress’s statements are being seen as poison? “If Chidambaram says talk to Hurriyat, what’s wrong with that. It’s just a suggestion,” he said.

Sudesh Verma wanted to know why the Congress could not diffuse the situation in the Valley earlier?

Col Ahmed said that Pakistan wants to inflict a thousand cuts, and it is playing its game. “We should be cautious while making statements that are likely to be taken advantage of,” he said.

Haq said that Congress is the reason why terrorism is present in the Valley in the first place. “When Rajiv Gandhi was PM, polls were massively rigged, and Kashmir became a fertile ground for terrorists. Now at least stone-pelters and other miscreants have been taught a lesson. However, of late, the policies seem to be weakening, and this could be due to coalition compulsions, he said.

Col Ahmed that that politics is weakening us. “Semi-aggressive posturing is not going to help in the Kashmir issue,” he said.

Raju asked why the Congress could not raise this issue in Parliament? He said that the Congress only wants to remain in news.

Brig Sharma said that at the ground reality, we are “building a success story”.

Haq said that strong policies are needed to halt anti-India forces that have to be neutralised.