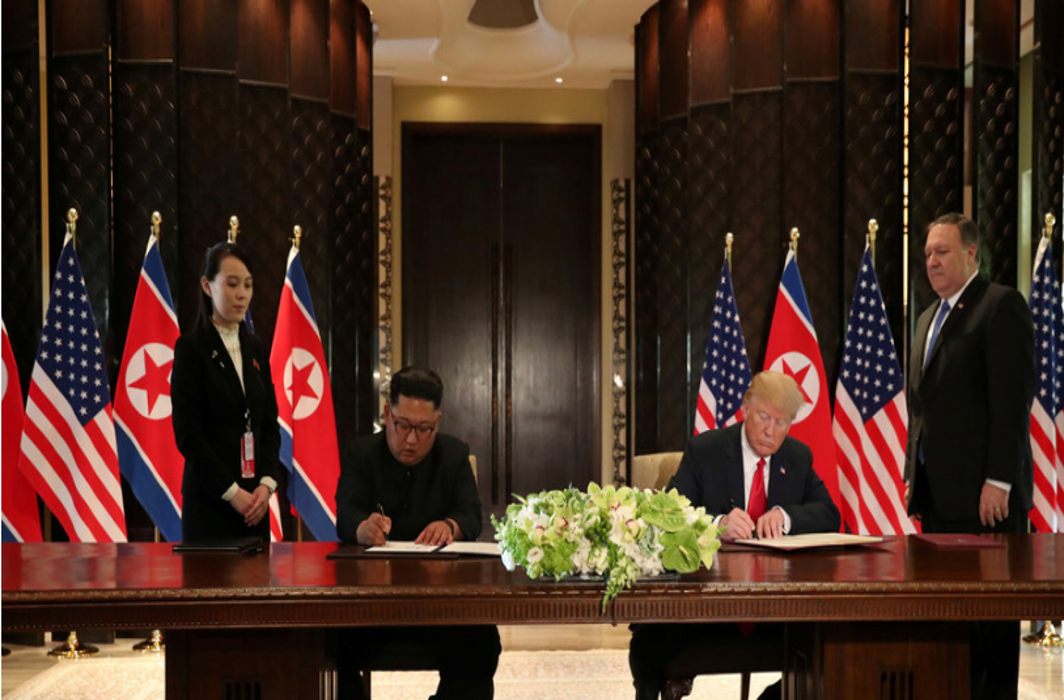 US President Donlad Trump and North Korean leader Kim Jong-un  have signed a document described by American leader as “important and comprehensive” following a historic meeting between the two in Singapore.

North Korea also reaffirmed its commitment to working “towards complete denuclearization of the Korean Peninsula,” broad wording that could mean phased denuclearization in return for a number of potential American commitments along the way.

However, there was no word on any US commitments, including on the removal of harsh sanctions on North Korea and security guarantees that Pyongyang had previously demanded as a condition to denuclearize.

The US president said he had formed a “very special bond” with Kim and that the US’s relationship with Pyongyang would be very different.

The US and the North Korea have also agreed to work for peace on the peninsula and address prisoners of war (POWs) and missing in action (MIA) cases from the 1950s Korean war, in which the US was on South Korea’s side.

The first ever meeting between the most unpredictable leaders, was held at the Capella Hotel on Singapore’s Sentosa Island on Tuesday.  The two leaders walked up to each other and exchanged a handshake set to go down in history.

The meeting began at 9 a.m. with a handshake, producing images that were carried live on television across the United States and beyond. They met one-on-one, accompanied by translators, for about an hour.

The two leaders arrived in Singapore on Sunday and met for the very first time on Tuesday morning. Kim Jong Un arrived at the venue in his limousine, at roughly 8:55 a.m. local time whileTrump arrived five minutes later.

According to reports, the two leaders addressed media persons before walking into their one-on-one discussion. Trump said he is confident the talks will be a “tremendous success” and that “we will have a tremendous relationship, I have no doubt”.

The North Korean Times reports that the 33-year-old Kim Jong un was heard telling Trump, “Nice to meet you, Mr. President,” to which, Trump, who is twice Kim’s age, gave him a thumbs up.

Kim Jong Un said, “It was not an easy path here. There’s a history of holding onto our ankles (a phrase which means that someone is trying to hold someone else back) and it appeared there were times that there were unfortunate practices where they were trying to block our eyes and our ears, but we’ve overcome everything and come to this place. Many people in the world will think of this as a form of fantasy from a science fiction movie.”

The U.S. President told reporters, “I feel really great. We’re going to have a great discussion and I think tremendous success. It will be tremendously successful. And it’s my honour and we will have a terrific relationship I have no doubt.”

After the brief exchange, Trump and Kim Jong Un made their way to the library at the Capella for their one-on-one private conversation, along with translators.

South Korea’s Yonhap news said that like the rest of the world, the South Korean President, Moon Jae In too watched the two leaders exchange their first historic handshake. He has been one of the key architects behind making the historic summit between Trump and Kim Jong Un possible.

Earlier in the day, Jae In said in a series of tweets that he was hopeful that the summit will to be recognised as a “historic milestone from war to peace.”

The South Korean leader also said, “The nuclear issue could not be completely solved by one summit but could take one year, two years or even longer for a complete resolution.”

Further, the South Korean media broadcast various gatherings across the country, which showed people cheering as they watch the historic moment on television sets.

Speaking moments after the two leaders signed the unspecified document, President Trump said that he had developed a “very special bond” with Kim Jong Un. “It’s been an honor to be with you.”When asked if he would invite Kim to the White House, Trump responded that he would: “Absolutely, I will.”

Standing again in front of their respective flags, where they began the historic day, Trump and Kim shook hands one final time.

Trump praised Kim Jon un saying, “(He’s) a worthy negotiator,He’s negotiating on behalf of his people.I learned he’s a very talented man. I also learned he loves his country very much.”  He said they would meet again.

Trump was scheduled to return to the United States on Wednesday, but will now leave immediately after meeting with North Korean leader Kim on Tuesday, the White House said in a statement on Monday.

“The discussions between the United States and North Korea are ongoing and have moved more quickly than expected,” the statement said.

Trump will depart at 8 p.m. Singapore time, which is 8 a.m. in Washington, D.C. according to the statement. This is despite the fact that last week Trump said the summit could last “two [or] three” days “depending on what happens” in the meetings.

The details of the document signed between the two leaders will be made public later in the day. The two leaders may come in front of mediapersons before they depart from Singapore.