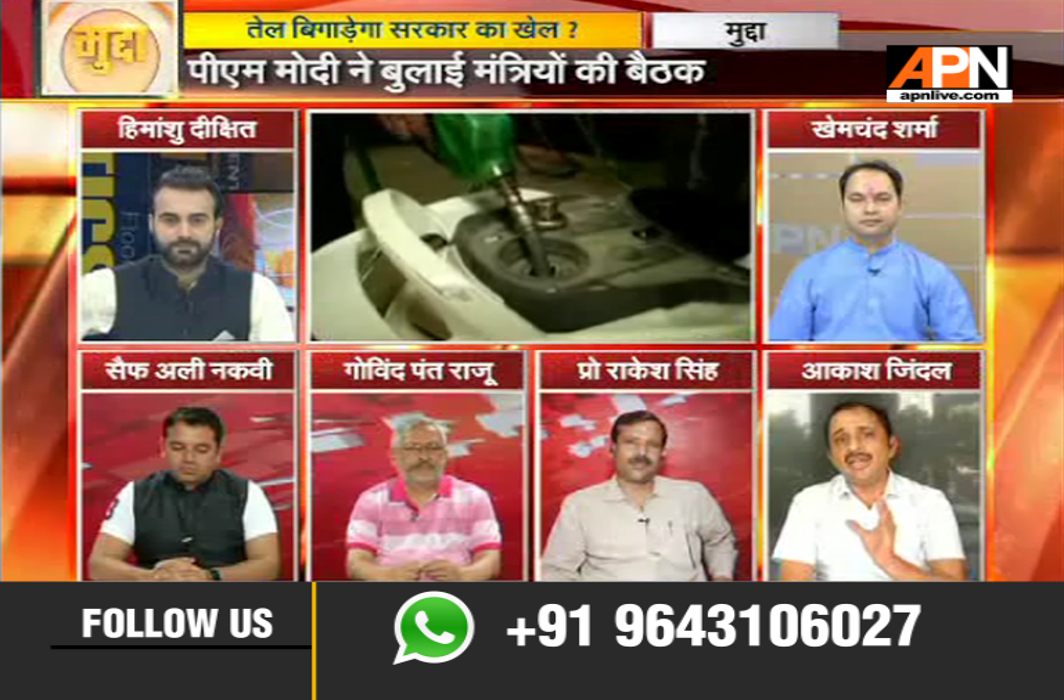 Convincing oilcos to cut profits and going for Iran imports are two solutions to bring them down; focussing on NRI bonds and masala bonds can check rupee slide

Crude oil prices are greatly impacting the economy. This, coupled with the slide of the rupee, has the government worried ahead of five state elections. A meeting of 38 domestic and international oil companies will be addressed by Prime Minister Modi on Monday. The price of crude oil has crossed 82 dollars per barrel which is the highest since November 2014. The Venezuelan political crisis has hit oil production driving up international crude oil prices.

Sharma made the opening remarks listing the government measures to tackle the crisis. He mentioned that it cut retail fuel prices, cutting excise duty on petrol and diesel by 1.5 rupees a litre, and also tried to reduce India’s dependence on imports in the long term by shifting focus to alternative fuels like methanol and ethanol. It has also tried to reduce consumption of fuel, by distributing induction cookers to people. It is also planning to get oil from Iran, the payment for which the country will use to import medicines from India. This is even as the United States is set to sanction the Middle Eastern country starting November 4. “But we have a nifty foreign policy and will not allow the States to dictate our trade and commerce,” he said.

Naqvi doubted Sharma’s data, recalling how “at a time when crude oil cost 160 dollars internationally we sold petrol at 71 rupees per barrel and diesel at 55 rupees per barrel” and then comparing the UPA’s performance with the NDA’s.

“The US can’t decide our export and import policy,” said Prof Singh. “It cannot decide whether or not we should maintain our ties with Iran. Basmati rice worth 17 million dollars has been exported to Iran in the last five years. Should not Iran return the favour in crude? We should start a barter system between the countries. Also, we should be conscientious in using energy so as to reduce the subsidy burden.”

The government has recently announced that no more fuel subsidies will be given to the people.

Fuel prices and dollar prices are driving up inflation, said Jindal. “We should bring in NRI bonds. Also, masala bonds should be exempted from withholding tax. This will ease borrowings and bring in more dollars to the country. Today we are on the verge of becoming the world’s fifth largest economy. We should reduce our dependence on crude oil and shift to using solar and nuclear energies. We should also decrease central excise and state VAT on fuel. There are too many two-wheelers on roads which consume diesel, so we should pay attention to that. Our Index of Industrial Production is only 4.3. This means we cannot generate jobs. These are the areas where we should take action.”

The government tried to give relief to consumers but its effects lasted for only 3-4 days, Raju said. The only way out seems to be convincing oilcos to cut profits in order to give relief to consumers. Another solution may lie in focussing on importing crude from alternative sources. He added that the effect of US sanctions will not affect India as much as it would affect countries like North Korea and Japan, so the Iranian imports plan of action is still viable.

The government has reduced the value of debt bonds to arrest the decline of the rupee. It is a big step, Sharma said. Citing the fact that excise duty on oil has been increased 12 times in the last year, Naqvi wanted fuel to be brought under GST, Goods and Services Tax.