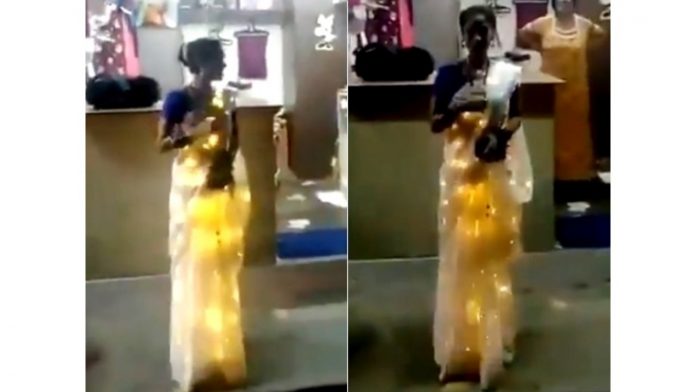 Well, the festive season is back again and people are eagerly waiting to celebrate the festivals with great enthusiasm and zeal. Tomorrow is Diwali and people have started decorating their house and surroundings in their own style. People celebrate this festival in their unique way in order to stand out.

Every year during Diwali, people light up diyas, lanterns, LED lights, and other decorations, and this year is no exception. Since Diwali is a ‘festival of lights’ and everything around you is lit up but have you ever seen a person lit up? But one woman has taken this festival on a different note and has come up with an out-of-the-box idea. An old video of a woman wearing a LED light saree is going viral once again.

It didn’t take long for netizens to notice and respond to the flashing and glimpsing saree covered with LED lights when it was shared once again on social media. The video which is being resurfaced online shows a woman wearing a saree giving it a twist in her own style. The woman is seen in a white saree lit with LED lights outside a shop, glowing. As the saree is draped with LED lights it seems to stand out and attracts people’s attention for all the right reasons.

The video, which has suddenly gone trendy once again, was first leaked on the internet in the year 2020. This clip has gone viral ahead of Diwali which is being celebrated on the 4th of November this year.

In a video, the Bengaluru woman even smiles and poses for the photographers. People were blown away by her odd and distinctive attire, while others were concerned that she was going too far and risking her life by wearing a saree with LED lights. Some people also wanted to know where they might get a similar saree. While some were amused, others joked that with the light ensemble, there was no need for diyas.

One of the users tweeted, “has she got a power bank with her for a backup?”, while the other one wrote, “What’s your #DeepavaliSaree like? Am sure your #DiwaliSari can’t match this one”.